By design on October 14, 2012Comments Off on A Feudin’ Son of Tennessee: Kenneth McKellar, Chapter 21 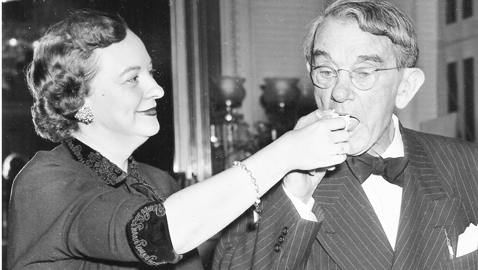 Richard Riedel was a veteran employee of the United States Senate, working almost fifty years in one capacity or another.  Riedel first came to the Senate as a nine-year old Page on September 27, 1918.  At the time, Riedel was in the fourth grade and the youngest amongst the Senate’s Pages.

Riedel eventually rose to become a liaison between the members of the Senate and the news media.  Kenneth Douglas McKellar had been in the Senate for two years by the time young Riedel arrived.  In his excellent memoir In the Halls of the Mighty, Riedel described K. D. McKellar in 1918.

“The Kenneth McKellar of my page days was Beau Brummell, jaunty and carefree with wavy brown hair and pink cheeks.  He must have been the most eligible bachelor in Washington in those days…”

McKellar was the last member of the Senate remaining who had been a senator when Riedel had first come to Capitol Hill in 1918.  Riedel’s description of Senator McKellar in 1952 was quite different.

“Withered and flabby, he was a lonely, sick old man with an aggravated temper.”

Riedel said McKellar should have retired from the Senate “gracefully”, but noted the old Tennessean was not always “overly graceful”, yet also acknowledged McKellar had been “a generous friend” to him.

Senator McKellar had originally announced he was “out of politics”, but reversed himself after the 1948 elections, vaguely citing “conditions in Tennessee” had caused him to change his mind.  McKellar was eighty-three years old in 1952 and no man had ever represented Tennessee in the United States Senate for more than three full terms save for K. D. McKellar.  The people of Tennessee had kept McKellar in the Senate almost twice as long as any other man to represent the state.  Being a bachelor, the United States Senate had become Kenneth McKellar’s life.

Janice McKellar, the Senator’s sister-in-law and one of his secretaries, once said that McKellar’s real home was his office and he gloried in the successes of Tennesseans and grieved over their losses.  The people of Tennessee were Kenneth McKellar’s family and the old Senator could not let go easily.  He was determined to run again for a seventh term despite many of his closest associates urging him to retire, not the least of which was Shelby County Boss E. H. Crump.

McKellar faced a serious opponent in the 1952 Democratic primary; Congressman Albert Gore had been running for the Senate since 1948, making speeches all across Tennessee at a frantic pace in sharp contrast to the Senator who was coming home to Tennessee less and less.  Preoccupied with his duties as Chairman of the Senate Appropriations Committee and frequently ill, McKellar remained in Washington, D. C. while Gore traveled through the towns and cities of Tennessee.

Senator McKellar was more dependent upon his staff, not unlike many aging incumbents.  McKellar’s youngest brother, Don, had been his Secretary for many years before passing away in 1945.  Don was quite likely the only person who could have changed the Senator’s mind about running again in 1952.

Visitors to McKellar’s Washington office noted he was not as mentally alert as he had once been; less charitable observers flatly said McKellar was becoming senile.  Such stories received wide currency and national reporter David Brinkley maliciously related a story about McKellar urinating against a column outside the Senate chamber; the implication being of course the old Senator did not realize he was not in the restroom.

The stories of K. D. McKellar’s numerous infirmities were regularly reported by the press, especially in those publications hostile to the Senator.  Each fall, fainting spell and trip to the hospital brought a fresh story reminding Tennesseans of Kenneth McKellar’s age and frailties.  A heavy cold was cause for concern and any new illness brought fresh speculation McKellar could or would not run again in 1952 despite his announced candidacy.

One particular sick spell caused renewed gossip that Senator McKellar would actually withdraw as a candidate in favor of former Senator Tom Stewart.  An enterprising reporter for one of the Memphis newspapers reported that Senator Ernest McFarland of Arizona, the Senate Majority Leader, was actually circulating a petition encouraging former Senator Stewart to run in place of the ailing McKellar.  Senator McFarland denied the report, saying he felt sure Tennessee Democrats could easily choose a candidate for themselves.  The story detailed McKellar’s illness, stating the Senator was confined to his apartment in the Mayflower Hotel in “a weakened condition.”  McKellar’s brother, Clint, had rushed to Washington, D. C. from Memphis to visit his sick sibling, making it appear the Senator was gravely ill, if not at death’s door.

It was readily apparent to McKellar’s friends and supporters he could not win yet another term without once returning to Tennessee as he had in 1946.  It was increasingly imperative that Senator McKellar come home to show himself to the voters to demonstrate he was both mentally and physically fit to serve another six years in the Senate.

Senator McKellar had officially announced his intention to seek reelection in June of 1951, more than a year in advance of the election.  McKellar had been the most consistently successful candidate in Tennessee’s history to that time and the Senator likely believed an early announcement would deter potential opposition.

E. H. Crump, as ever keeping a watchful eye on every development in Memphis, bluntly told McKellar “Albert Gore is trying to get your job”.  McKellar later asked the Memphis Boss if he really believed Gore would run, thinking Governor Browning would become a candidate.  Crump had begged McKellar not to run again, but once Senator McKellar decided he would indeed be a candidate, Crump loyally supported his old friend and political partner.

Albert Gore and Kenneth McKellar had never been personally close, as each represented a competing faction in Tennessee politics.  Gore had been a local Superintendent of Schools when he managed Gordon Browning’s 1934 campaign for the United States Senate.  Browning, grateful for Gore’s support, appointed him Tennessee’s Commissioner of Labor during his first gubernatorial administration in 1937.  Gore left Browning’s Cabinet in 1938 when Fourth District Congressman J. Ridley Mitchell did not run again to campaign for the U. S. Senate instead.  Gore won the Democratic nomination and remained in Congress for the next fourteen years.

Albert Gore was only forty-four years old in 1952 and yet was a veteran member of Congress.  Gore was an able speaker and quite personable when he wished to be; Gore had an especially attractive family in contrast to the old bachelor McKellar.  Congressman Gore was handsome and photogenic, yet another contrast to the aging McKellar whose face oftentimes showed the ravages of time.

Gore served on the Appropriations Committee in the House while McKellar was either ranking member or Chairman of the Senate’s Appropriations Committee.  Gore readily confessed McKellar was much more effective in helping the Tennessee Valley Authority with funding and protecting the agency than he had been in the House.  Despite coming from opposing political factions, Senator McKellar observed the niceties, sending the young Congressman a warm congratulatory note upon the birth of Albert Gore, Jr.

Congressman Gore rapidly concluded he would campaign for the Senate on his own merits and would barely even mention Senator McKellar.  Gore himself said McKellar’s record with regard to the TVA was excellent and he could not justly criticize the old Senator.  When Gore did mention McKellar, the Congressman always carefully referred to McKellar in the past tense, another subtle reminder of the Senator’s advanced age.  Gore was equally careful to always refer to Senator McKellar in a respectful tone for McKellar’s long service to the State of Tennessee and her people.  A shrewd politician, Gore knew that most Tennesseans liked and respected McKellar and appreciated the countless favors and things he had done for Tennessee.  It was a brilliant strategy.

TIME magazine, never an admirer of Senator McKellar, succinctly and correctly summarized the Tennessee Senate race between Gore and McKellar as “44 vs. 83,” the respective ages of the two candidates.

Gore, like Estes Kefauver before him, had invaded Shelby County, campaigning relentlessly inside Boss Crump’s domain.  Even McKellar’s friends and supporters seemed to be all too cognizant of the possibility the Senator’s health would give out, as many were seen greeting Gore warmly during his visits to Memphis.  Crump spitefully reported who was introducing Gore around to McKellar and the Memphis Boss noted his “disappointment” with Mayor Watkins Overton for having his picture taken with Congressman Gore.

The McKellar campaign was faced with putting together an organization all across Tennessee to meet the challenge presented by the youthful and vigorous Congressman Albert Gore.  Many of McKellar’s strongest supporters were, like the Senator himself, aged and no longer much of a factor in the local politics of their respective communities.  Others had died or were simply too old and incapacitated to participate in election campaigns.  McKellar sent thousands of form letters from his Washington office duly thanking those who had signed his qualifying petitions.

A campaign manager and publicist were hired for the campaign and a statewide headquarters was opened in Nashville inside the Hermitage Hotel.

A Feudin’ Son of Tennessee: Kenneth McKellar, Chapter 21 added by design on October 14, 2012
View all posts by design →