By design on June 24, 2012Comments Off on A Feudin’ Son of Tennessee: Kenneth McKellar, Chapter 5 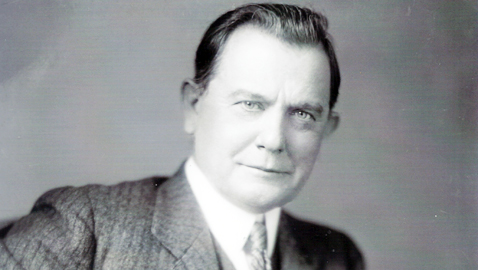 When K. D. McKellar first entered the United States Senate on March 4, 1917, he was forty-eight years old.  One long-time Senate employee recalled McKellar was well dressed, “a real Beau Brummell.”  McKellar frequently wore a black bow tie and dressed the part of a senator.  Well into the 1940s, McKellar often sported a formal jacket, vest and the striped pants of a different age.  McKellar’s Phi Beta Kappa key rested on a gold chain across his stomach and at the end of the chain was a small pocketknife engraved with his initials.

Kenneth D. McKellar has been described by many as a “conservative” and while McKellar was certainly a Southern Democrat, he was hardly considered a conservative, especially in his years as a Congressman and during his initial service as Tennessee’s United States Senator.  In fact, when he was seriously challenged in the 1928 Democratic primary, his opponent was far more conservative and McKellar was denounced by a Columbia, Tennessee newspaper as a “socialist.”

McKellar was an avid supporter of President Woodrow Wilson’s “New Freedom” program; he would be a caustic critic of Republican President Herbert Hoover as well as a loyal advocate of Franklin D. Roosevelt’s “New Deal.”

Woodrow Wilson was to remain McKellar’s political idol and while the Tennessean strongly supported Wilson’s administration, Senator McKellar had something of a populist streak in his personality and had serious reservations about some of Wilson’s defense measures.  When President Wilson proposed to increase a reserve force for the Army by adding 400,000 men, McKellar opposed it, favoring a smaller number of volunteers.  McKellar disliked the idea of conscription to increase the armed forces, an attitude he maintained as war with Germany became more imminent.

When America did enter World War I, it was ill prepared for the bloody conflict.  America’s economy had to be focused on production for the war effort and mobilization proved to be difficult.  McKellar was quite suspicious of big business and was soon deeply concerned about the businesses he felt were exploiting the American people by charging higher prices for equipment and supplies for the military.

Senator McKellar proposed legislation to punish any person serving in the government in an advisory capacity who profited from “insider” deals with agencies supplying the armed forces.  McKellar believed businessmen volunteering their services to the government in a time of war should not be allowed to direct contracts to their own firms.  President Wilson pointedly told McKellar he would not support McKellar’s bill, feeling the national government needed the widest possible latitude in conducting the war.

McKellar was undeterred by Wilson’s opposition and participated in an investigation into the War Department’s procurement policies.  McKellar paid close attention to the mail from back home and he had received more than a few complaints about the lack of adequate supplies for soldiers.  The rapid mobilization of American troops had outpaced the supplies for those same troops and there was neither enough equipment nor clothing for the enlisted men.  As troops were being trained to go overseas to fight, McKellar was receiving letters detailing the lack of rifles for soldiers, as well as a scarcity of warm clothing for the winter months.  McKellar was further irritated when the War Department sought to purchase lumber for the construction of an aviation facility in Memphis from St. Louis.  The decision made little sense as the lumber could have been bought locally at a better price and McKellar was not pleased.

McKellar proved to be quite adept at questioning witnesses before Congressional committees, an ability that would prove to be quite embarrassing to FBI Director J. Edgar Hoover in the future.  McKellar remained one of the most persistent critics of the military’s purchasing policies during the war.

With the successful conclusion of World War I, President Woodrow Wilson sailed for Paris to personally preside over the peace conference, which would write the Versailles Treaty.  Wilson was greeted by wildly cheering throngs which lined the boulevards of Paris.  Wilson soon became the leading figure at the Paris peace conference, which dictated the terms of peace to the defeated powers.  The map of Europe was forever changed as the allied powers, led by President Wilson, dismantled and carved up territories that had formerly belonged to the German and Austro-Hungarian Empires.  Entirely new and independent nations emerged from the remnants of fallen empires.  Wilson was passionately, if not obsessively, convinced that nothing less than peace for all time was at stake with the successful outcome of the treaty.  President Wilson was equally convinced America must enter into the new League of Nations.  Ironically, it was the harsh terms of the Treaty of Versailles that sowed the seeds of discontent and resentment that eventually led to the rise of Adolf Hitler and the Second World War.  The treaty helped to cripple the German economy, which was further harmed by the advent of the global Great Depression.  Wilson’s concept of peace for all time was as illusory as was the American people’s desire to participate in a League of Nations.

Wilson returned to the United States following his triumph in Paris and was insistent America join the League of Nations.  Many Americans loathed the idea of entangling the United States in European affairs and the declaration of war against Germany and her allies had hardly been unanimous.  In fact, the first woman ever elected to Congress, Jeanette Rankin of Montana, voted against a declaration of war.  Senators Robert LaFollette of Wisconsin, William J. Stone of Missouri and James K. Vardaman of Mississippi had also voted against war.  The pacifist feeling in American society was hardly confined to the Congress; Wilson’s own Secretary of State, the famed orator William Jennings Bryan, resigned his office rather than pursue a course which might ultimately lead to war.  Interestingly, Jeanette Rankin would return to Congress in 1941 and would be the only member of Congress to vote against declaring war on Hitler’s Germany and the Japanese Empire, despite the attack on Pearl Harbor.

Woodrow Wilson’s crusade to have America join the League of Nations met with stiff resistance, especially from Congressional Republicans.  Despite Wilson’s acclaim and the frenzied reception he had received in Paris, his position and prestige had been weakened in his own country.  Wilson had called for the election of a Democratic Congress in the off-year elections of 1918 and was stunned when his party suffered a staggering defeat.  Wilson’s opponents, which included the still popular former President Theodore Roosevelt, loudly proclaimed the rejection of Wilson’s plea was nothing less than a rejection of the president and his policies.

Republicans in the United States Senate, led by the aristocratic and icy Boston Brahmin Henry Cabot Lodge, cleverly presented a series of “reservations” to the Versailles Treaty and American participation in the League of Nations.  Wilson, doubtless a brilliant man, was also a man who absolutely believed in the moral righteousness of his own beliefs and adamantly refused to compromise even when leading Congressional Democrats told him the treaty was dead without accepting some or all of the reservations.  Wilson seemed not able to conceive the treaty could die in the Senate and stubbornly decided to take his case directly to the American people.  President Wilson embarked upon a grueling tour of the country, traveling by train and speaking several times a day.

Wilson made an eloquent plea for American participation in the League of Nations, but the stress of the tour took a cruel toll on the president’s health.  Wilson suffered a debilitating stroke on October 2, 1919 after having made a speech in Pueblo, Colorado.  In the age of television and the Internet, it is hard to imagine, but almost no one knew the true extent of Wilson’s disabilities and condition.  The President’s stroke left him virtually incapacitated, although his condition was successfully hidden from the American public by First Lady Edith Bolling Wilson and Wilson’s physician, Dr. Cary Grayson.  It was the most serious non-fatal illness ever suffered by an American president.

Mrs. Wilson exercised absolute and rigid control of both the disabled President’s person and schedule.  Mrs. Wilson carefully filtered what information reached the stricken chief executive and members of Wilson’s Cabinet oftentimes waited weeks for replies to official concerns and inquiries.  When replies did come, they were frequently in the First Lady’s own handwriting, usually beginning, “The President wishes me to say…”  It was not long before some gossips whispered that Edith Bolling Wilson was in fact the first female President of the United States.  Mrs. Wilson dismissed such rumors with the remarkable statement that she merely decided what the President saw and who saw the President.  Yet it is also certainly true Mrs. Wilson wielded unexpectedly enormous influence over policy matters, especially after her husband’s stroke.  Those members of the President’s official family who angered or displeased her almost always came to a bad end.  Secretary of State Robert Lansing was particularly disliked by Mrs. Wilson and he found himself the recipient of a terse letter from the President requesting his resignation following Lansing’s having called the Cabinet together in Wilson’s absence.

Despite Wilson’s infirmities, Senator McKellar remained loyal to the President and was a fervent supporter of the United States entering the League of Nations.  Tennessee’s other United States Senator, John Knight Shields, was unenthusiastic about both the League of Nations and Woodrow Wilson personally.  Senator Shields’s attitude would have an effect upon his own career and Tennessee politics.

A Feudin’ Son of Tennessee: Kenneth McKellar, Chapter 5 added by design on June 24, 2012
View all posts by design →