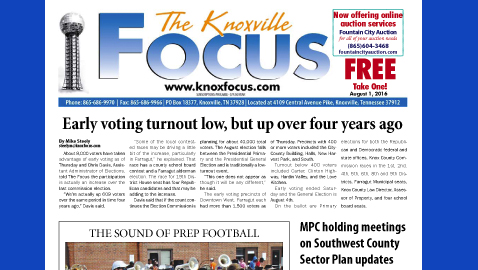 Early voting turnout low, but up over four years ago

About 8,000 voters have taken advantage of early voting as of Thursday and Chris Davis, Assistant Administrator of Elections, told The Focus the participation is actually an increase over the last commission election.

“We’re actually up 609 voters over the same period in time four years ago,” Davis said.

“Some of the local contested races may be driving a little bit of the increase, particularly in Farragut,” he explained. That race has a county school board contest and a Farragut alderman election. The race for 19th District House seat has four Republican candidates and that may be adding to the increase.

Davis said that if the count continues the Election Commission is planning for about 40,000 total voters. The August election falls between the Presidential Primary and the Presidential General Election and is traditionally a low-turnout event.

“This one does not appear as though it will be any different,” he said.

The early voting precincts of Downtown West, Farragut each had more than 1,500 voters as of Thursday. Precincts with 400 or more voters included the City-County Building, Halls, New Harvest Park, and South.

On the ballot are Primary elections for both the Republican and Democratic federal and state offices, Knox County Commission races in the 1st, 2nd, 4th, 5th, 6th, 8th and 9th Districts, Farragut Municipal seats, Knox County Law Director, Assessor of Property, and four school board seats.