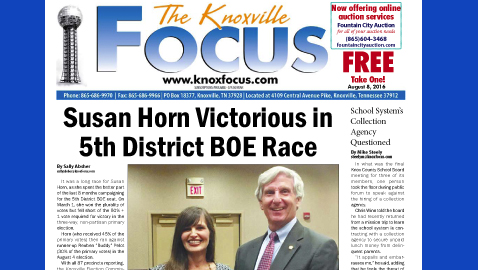 It was a long race for Susan Horn, as she spent the better part of the last 8 months campaigning for the 5th District BOE seat. On March 1, she won the plurality of votes but fell short of the 50% + 1 vote required for victory in the three-way, non-partisan primary election.

But winning long, difficult races is nothing new for this wife, mother, PTA volunteer, and breast cancer survivor.

Horn won the old fashioned way – knocking on doors, meeting voters and engaging with them one-on-one.

She posted a special “thank you” on the SPEAK social media page: “So excited that I’ll soon be representing the 5th District on the BOE! Thank you to SPEAK, collectively, as well as so many individual members! Many of you have called voters, walked with me in the 4th of July Parade, and encouraged your friends in my area to vote – THANK YOU all so much!! What a great team effort!!”

Horn had a message that was simple, consistent, and resonated well with parents, teachers, and taxpayers:

“Our children are depending on us to ensure they receive the skills they need, not only to succeed academically, but also to become lifelong learners and problem solvers. I talk with parents and concerned community members all the time and I want to be a voice for them on the BOE.”

“We need happy, qualified teachers in every classroom. We can have the best buildings and technology in the world, but without teachers who engage and inspire students, these things are useless.”

“You can count on me to use a common sense approach when making decisions; constantly seek feedback from families and teachers, and work toward having a transparent budget so the taxpayers can see where our money is being spent.”

What she didn’t have was a ton of money. But that didn’t matter in this election cycle, as voters seem to be increasingly wary of the political and corporate elite attempting to buy elections. A quick tally of Horn’s financial disclosure statements through July 27 indicates that she received a total of $14,965 in contributions from all sources, including $2686 in in-kind contributions. Pelot received nearly three times that amount – $32,675, with no in-kind contributions.

Horn will join new BOE members Jennifer Owen (District 2), Tony Norman (District 3) and returning BOE members Terry Hill (District 6), Patti Bounds (District 7), Mike McMillan (District 8) and Amber Rountree (District 9) to form the majority of what some have called the “Most Pro-Public Education” Board of Education in the state – or perhaps in the South.

That should do more to further the KCS goal of becoming “the best school district in the south” than all the technology, common core (aka TNReady) standards and assessments, and leadership academy administrators in Knox County combined.