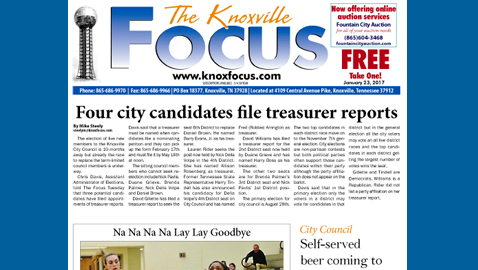 The election of five new members to the Knoxville City Council is 10 months away but already the race to replace the term-limited council members is underway.

Chris Davis, Assistant Administrator of Elections, told The Focus Tuesday that three potential candidates have filed appointments of treasurer reports. Davis said that a treasurer must be named when candidates file a nominating petition and they can pick up the form February 17th and must file it by May 18th at noon.

David Gillette has filed a treasurer report to seek the seat 6th District to replace Daniel Brown. He named Barry Evans, Jr. as his treasurer.

David Williams has filed a treasurer report for the 2nd District seat now held by Duane Grieve and has named Harry Boss as his treasurer.

The primary election for city council is August 28th. The two top candidates in each district race move on to the November 7th general election. City elections are non-partisan contests but both political parties often support those candidates within their party although the party affiliation does not appear on the ballot.

Davis said that in the primary election only the voters in a district may vote for candidates in that district but in the general election all the city voters may vote an all five district races and the top candidates in each district getting the largest number of votes wins the seat.

Gillette and Tindell are Democrats, Williams is a Republican. Rider did not list a party affiliation on her treasurer report.