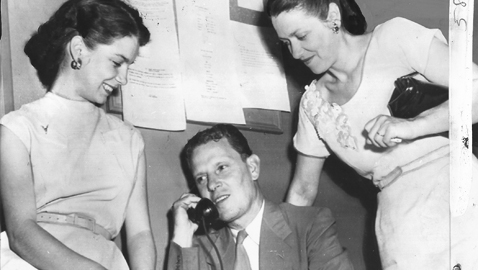 By Ray Hill
Congressman Albert Gore’s independent streak had not set well with President Franklin Roosevelt. FDR was not one to value independence in a legislator and tended to have a vindictive streak. As World War II raged on, there were rumblings that Gore would draw a serious opponent inside the Fourth Congressional district. One of the most well-known and well-liked residents of Gore’s district was Alvin York.

“Sergeant” York was a genuine hero from the First World War and widely admired throughout Tennessee. York was quoted as saying that Gore was young enough to go overseas and fight, while Congress might be a fitting place for the old hero to serve. York was especially close to Tennessee’s powerful senior U. S. Senator Kenneth D. McKellar. Albert Gore was not at all close to Senator McKellar and they represented competing factions inside Tennessee’s Democratic Party.

York had been further immortalized by a movie based on his life and experiences during the First World War when the Warner Brothers movie studio released a motion picture entitled “Sergeant York.” York was played by no less than Gary Cooper. Cooper won an Academy Award for his portrayal of Alvin York. The movie was nominated for a host of other awards and was highly popular, but some believed York’s own personal popularity had been diminished by his constant need for money.

In any event, Alvin York did not become a candidate and Albert Gore remained in Congress. Gore’s populism and maverick nature was highly popular inside his own Congressional district.

The war soon proved to be a serious dilemma for Congressman Gore. At thirty-six years of age, Gore was young and healthy enough to be fighting, although he and Mrs. Gore had a small child. Congressmen were immune to the draft, but Gore decided to waive his own immunity. Gore spoke before a chapter of the American legion and told them he was ready to do his part for the war effort, although he refused to resign his seat in the Congress.

Gore was summoned to report to Fort Oglethorpe, but the timely intervention of President Roosevelt saved the Congressman from actually fighting in the Second World War. Gore went to the White House where FDR told him that he was needed at home. Following his conversation with Roosevelt, Congressman Gore told waiting reporters that he would remain in Congress.

Evidently Gore’s failure to enlist rankled some voters inside his district and in 1944 he faced opposition in the Democratic primary from W. H. “Peck” Turner. As usual, Gore campaigned hard and told audiences he had done his best while in Congress, although he readily admitted he had made mistakes in office, but stressed they were honest mistakes.

Gore carried every county inside his district, although the vote in his home county of Smith was unusually close.

After the general election, Gore resigned from Congress to enlist in the armed forces. A recent change in the law allowed Gore to keep his place in Congress while he was serving in the military; in essence, Gore was resigning from Congress, but would resume his place in January of 1945.

The war was almost over by that time and Gore did serve in Europe for a few months before returning to the United States in March of 1945. The Commander-In-Chief of all American armed forces died just after Gore’s homecoming. Franklin Delano Roosevelt died on April 12, 1945 at his retreat in Warm Springs, Georgia.

In speaking to his constituents via his regular radio show, Gore eulogized FDR with his usual eloquence.

With the death of President Franklin Roosevelt, the ascension of the little man from Missouri to the presidency, and the end of World War II, the United States of America entered a new era. Congressman Albert Gore would be an important part of that new era and his political standing in Tennessee continued to grow. Gore had always been ambitious and more than one commentator of the time noted that Albert Gore seemed to be a young man in a hurry.

Senator Kenneth McKellar, having served Tennessee in either the Congress of the United States Senate continuously since 1911 had been reelected to a sixth term in the 1946. McKellar had easily dispatched a primary opponent who had quite nearly beaten his junior colleague four years previously without once returning from Washington. During the fall of 1947 McKellar was home in Memphis and gave a statement to the Press-Scimitar that he was serving his last term and would not be a candidate for political office in the future.

Senator McKellar’s announcement resonated with Albert Gore, who very much wanted to serve in the United States Senate. Gore had actually been contemplating a race for the Senate in 1948 against incumbent Tom Stewart, but decided against it when Chattanooga Congressman Estes Kefauver entered the race. Gore was also likely preoccupied with family matters, as it was in 1948 that the Congressman and his wife welcomed a new family member in the form a new son, Albert Gore, Jr.

The baby’s arrival was front-page news for the Nashville Tennessean, which pleased Congressman Gore to no end.

Congressman Albert Gore, despite seeking reelection to his seat in the House of Representatives, did participate in Tennessee’s political wars that year. 1948 would be a pivotal election in Tennessee’s history that year, with E. H. Crump, leader of the Shelby County political machine, making perhaps the worst mistake of his long career. Crump had never been especially fond of Senator Tom Stewart; it was Crump’s political partner, Senator McKellar, who had selected Stewart to run for the Senate in the first place. When Stewart was quite nearly defeated for renomination in 1942 before the Shelby County vote was reported, Crump was beside himself.

Mr. Crump announced in advance of the 1948 election that he would not support Senator Stewart for another term. Crump likely believed his announcement would deter Stewart from running again; if so, he was wrong. Senator Stewart stubbornly declared his candidacy for a third term. Crump, nudged by some of his close associates, supported Cookeville Judge John A. Mitchell for the senatorial nomination, a man the Memphis Boss had never even met. Crump’s determination to dump Senator Stewart led to a three-way race between Stewart, Estes Kefauver and Judge Mitchell. It was a mistake that would end the domination of Tennessee politics by the McKellar – Crump combine.

Senator McKellar was frequently ill and often aggravated during that time and after having usually had the Memphis Boss follow his own lead with candidates, was reluctantly induced to support Judge Mitchell. It was clear that McKellar was not comfortable supporting Mitchell, nor did he think the judge could win the nomination. McKellar liked Tom Stewart personally and would have preferred to support his friend yet again, but he could not change Crump’s mind.

Congressman Albert Gore openly supported the candidacy of former Governor Gordon Browning, who was seeking a comeback against incumbent Jim Nance McCord. Governor McCord was reeling from having imposed the first sales tax upon Tennesseans, who did not seem to appreciate the fact the new money would provide free textbooks for all school children. Congressman Gore spoke often on behalf of Browning, but was careful to avoid entangling himself in the heated senatorial primary.

Once Kefauver won the Democratic nomination for the U. S. Senate, Gore campaiged for the entire Democratic ticket all across Tennessee. Gore’s enthusiasm for campaigning was far more than being loyal to his own party; it allowed him to meet and greet potential supporters should he challenge Senator McKellar in 1952.

Relations between Estes Kefauver and Albert Gore were usually friendly, although the two men were very different in temperament. Kefauver was a serial womanizer and frequently drank to excess, while Gore was profoundly in love with his wife and adored his family. Gore also cared little for alcohol and did not particular like that side of his colleague. There was also an element of rivalry between Albert Gore and Estes Kefauver for preferment, as both were ambitious to go beyond Tennessee politics and travel the national stage.

While Gore was campaigning for the entire Democratic ticket in 1948, E. H. Crump made yet another mistake by refusing to back Harry Truman in his come from behind win. Crump, infuriated with the civil rights platform of the national Democratic Party, supported South Carolina Governor Strom Thurmond and the “Dixiecrats”. Senator McKellar refused to support Thurmond and backed Truman instead.

Strom Thurmond carried Memphis and Shelby County, but Harry Truman carried Tennessee. Crump’s decision to bolt the Democratic Party further diminished whatever national influence he had and he was even more dependent upon Senator McKellar.

Albert Gore’s own prestige had increased with the election of Gordon Browning and Estes Kefauver. Tennessee was to lose a Congressional seat during the 1950 redistricting and the reshuffling left Albert Gore without a seat in the Congress. It was tacitly understood that Gore would not be seeking reelection to the House in 1952, but instead running for the U. S. Senate whether K. D. McKellar ran again or not.