By design on February 16, 2014Comments Off on 5th grade student at Adrian Burnett plans to raise $20K for class trip 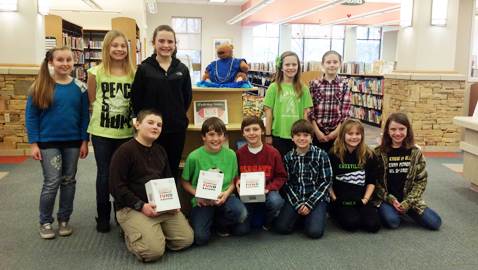 “While running for student council, everyone kept asking why I was running,” 5th grade student Jordan Bishop told The Focus. “I decided that I wanted to help all of my 5th Grade Safety Patrol Class to have the opportunity to go on the trip to Washington, D.C. I didn’t want money to be the reason for them not getting to go.”

To everyone’s surprise, this was not simply a “campaign promise.” Jordan presented his fund raiser proposal to the PTSO and to the parents of the students eligible for the annual trip. He formed a committee which consists of 32+ people in order to raise $20,000.

“The fundraising is going great.  We have already sold over 200 dozen Krispy Kreme Doughnuts, 68 dozen chocolate covered strawberries, and we had our first craft show this past Saturday on the 15th,” Jordan said.  “We kick off a candy bar sale on Tuesday, February 28.  We are all at least committing to sell two boxes and some have said they will sale six boxes of candy bars.  I believe we will do very well at this portion of the fundraiser,” he added.

Jordan’s goal is ambitious. Between school, swim team practice, and Boy Scouts, he is one busy 5th grader.  However, thanks to his mother Angela and the committee, they are making steady progress. Three community craft shows are scheduled to benefit the cause with over 25 vendors on the books:

The fundraising deadline for Jordan and his classmates is March 25th.

When asked if he thought he had a future in politics, Jordan told The Focus: “When I grow up, I want to be an animal control officer.  I love helping people, but my true love is being able to help animals.”

The Focus wishes him well.

5th grade student at Adrian Burnett plans to raise $20K for class trip added by design on February 16, 2014
View all posts by design →