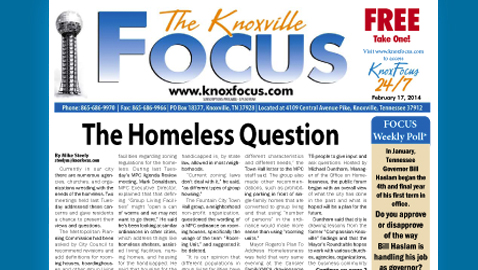 Currently in our city there are numerous agencies, churches, and organizations wrestling with the needs of the homeless. Two meetings held last Tuesday addressed these concerns and gave residents a chance to present their views and questions.

The Metropolitan Planning Commission had been asked by City Council to recommend revisions and add definitions for rooming houses, boardinghouses and other group living facilities regarding zoning regulations for the homeless. During last Tuesday’s MPC Agenda Review meeting, Mark Donaldson, MPC Executive Director, explained that that defining “Group Living Facilities” might “open a can of worms and we may not want to go there.” He said he’s been looking at similar ordinances in other cities, which address things like homeless shelters, assisted living facilities, nursing homes, and housing for the handicapped. He said that housing for the handicapped is, by state law, allowed in most neighborhoods.

“Current zoning laws don’t deal with it,” he said, “as different types of group housing.”

The Fountain City Town Hall group, a neighborhood non-profit organization, questioned the wording of a MPC ordinance on rooming houses, specifically the usage of the term “Rooming Unit,” and suggested it be deleted.

“It is our opinion that different populations in group living facilities have different characteristics and different needs,” the Town Hall letter to the MPC staff said. The group also made other recommendations, such as prohibiting parking in front of single-family homes that are converted to group living and that using “number of persons” in the ordinance would make more sense than using “rooming units.”

Mayor Rogero’s Plan To Address Homelessness was held that very same evening at the Cansler Family YWCA, drawing some 75 people to give input and ask questions. Hosted by Michael Dunthorn, Manager of the Office on Homelessness, the public forum began with an overall view of what the city has done in the past and what is hoped will be a plan for the future.

Dunthorn said that city is drawing lessons from the former “Compassion Knoxville” findings and that the Mayor’s Roundtable hopes to work with various churches, agencies, organizations, the business community and others. The goal is to attempt to prevent or reduce homelessness, be accountable across the board, and work toward common, achievable goals.

“We have the political will behind this plan,” Dunthorn stated. “Homelessness is not acceptable.”

Results of the public comments may be included in the plan to be presented to the city council on February 27 in a Council workshop. Councilmen attending last week’s public forum included Duane Grieve, Nick Della Volpe, Finbarr Saunders and Daniel Brown.

From representing different local agencies, churches, and businesses came comments about the proposed plan. Each comment was written on two flip boards in front of the meeting. Comments ranged from those asking how it would be funded, if the city plans to coordinate or run the effort, how the new Safety Center will play in the plans, if the county government and the sheriff’s office are part of it, if plans are in place to deal with jail releases and mentally ill are included, and that a more creative communications system is needed between the city, the agencies, and the public.

One person said that he was skeptical of plans to reintegrate the chronic homeless who have no wish to participate. Another resident said the plan should include not only housing but services  as well.  Another questioned if the city plans to locate or promote housing throughout the city rather than just downtown. One woman said that case management is important and funding is needed to hire more managers.

Also discussed was making public transportation more available, with one person saying that the city service is not profitable now and there are few funds to expand it.

Each person who attended was asked to sign in and the comments, suggestions, and questions will be considered as the mayor, the staff, and Roundtable members consider strategies, public input, and federal resources.

“Homelessness is a complicated issue,” the Mayor noted in the announcement of the meeting, “and effective responses require collaboration among many different partners. This plan is not a solution to any single problem. It is a framework that we will use to coordinate the efforts to address both short-term and long term challenges for people experiencing homelessness or at risk of becoming homeless.”