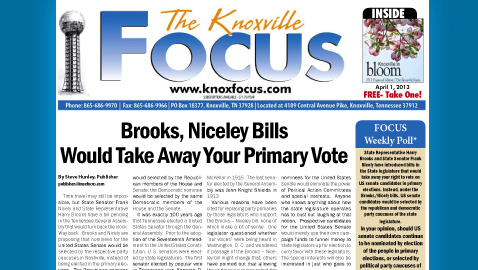 Brooks, Niceley Bills Would Take Away Your Primary Vote

Time travel may still be impossible, but State Senator Frank Nicely and State Representative Harry Brooks have a bill pending in the Tennessee General Assembly that would turn back the clock. Way back.  Brooks and Nicely are proposing that nominees for the United States Senate would be selected by the respective party caucuses in Nashville, instead of being elected in the primary elections.  The Republican nominee would selected by the Republican members of the House and Senate; the Democratic nominee would be selected by the same Democratic members of the House and the Senate.

Various reasons have been cited for replacing party primaries by those legislators who support the Brooks – Niceley bill, none of which make a lot of sense.  One legislator questioned whether “our voices” were being heard in Washington, D. C. and wondered if passage of the Brooks – Niceley bill might change that; others have pointed out that allowing the partisan caucuses select the nominees for the United States Senate would eliminate the power of Political Action Committees and special interests.  Anyone who knows anything about how the state legislature operates has to bust out laughing at that notion.  Prospective candidates for the United States Senate would merely use their own campaign funds to funnel money to state legislators up for election to curry favor with these legislators.  The special interests will also be interested in just who goes to the Senate and will generously donate to the campaigns for the legislators and come back to whisper in the right ears when the time comes to nominate a prospective U.S. Senator.  Even contributing lavishly to the campaigns of state legislators would be far cheaper for would-be U.S. Senators than buying television time and running a traditional statewide primary campaign.

Legislators who would otherwise have no hope of winning a contested primary election would suddenly have a realistic chance of winning a nomination for the Senate.  For example, Lieutenant Governor Ron Ramsey, who was defeated for the gubernatorial nomination by Bill Haslam, would not have to compete in an open primary if he chose to seek a U.S. Senate seat, and would be a formidable candidate in an electorate composed entirely of members of the legislature.

Many of the same Republican legislators who support the Brooks – Niceley bill support electing local school Superintendents, but now want to  basically appoint  U.S. Senate candidates through party caucuses. This is very inconsistent, but then politics and politicians are seldom consistent and often hypocritical.

Take Senator Lamar Alexander, for example. Lamar Alexander has served in just about every capacity one can serve in public life; a former two-term governor, President of the University of Tennessee and Secretary of Education in the administration of President Ronald Reagan, Alexander won a hotly contested Republican primary with Congressman Ed Bryant to get to the United States Senate through the current primary election process of not nominating U.S Senators.  Bob Corker lost his first Senate contest to Bill Frist and served in the Cabinet of Governor Don Sundquist and won election as Mayor of Chattanooga.  Corker won his own hard fought primary campaign, facing former Congressmen Ed Bryant and Van Hilleary.  Alexander had not been on a ballot in Tennessee for more than 20 years when he first ran for the United States Senate.  Both men demonstrated considerable skills in winning election to the U. S. Senate.

Senator Niceley points out people would still be able to choose their own senator in the General Election, which is technically true, however, which ever nominee is the ultimate victor would be the choice of the members of the Tennessee General Assembly, not the people of Tennessee.

Should the Niceley – Brooks bill pass, it is almost certain senators will hear the voices of the legislators in Nashville more loudly, but it will surely also diminish the voice of the people.  Ultimately the Democrats and Republicans in Nashville may open the door to a strong Independent candidacy.  When Joe Lieberman lost the Democratic nomination for the United States Senate in 2006, he entered the general election as an Independent and won.  Senator Bernie Sanders of Vermont, while caucusing with the Democrats in the U. S. Senate, runs as an Independent.  Former Governor Angus King of Maine won two terms as Chief Executive as an Independent and was just elected to the United States Senate, beating both a Republican and a Democrat.  Harry F. Byrd, Jr. of Virginia ran as an Independent in 1970 and was elected and reelected in 1976.

The current Knoxville Focus poll confirms virtually nobody supports the Brooks – Niceley bill except for the people it benefits the most, certain  state legislators.