By design on May 28, 2012Comments Off on A Feudin’ Son of Tennessee: Kenneth McKellar Chapter 1 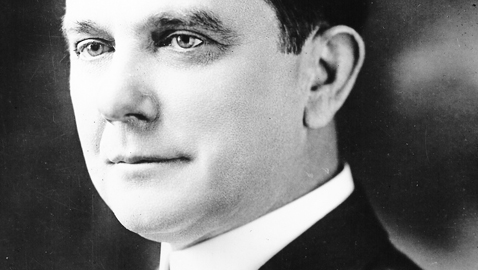 It will soon be one hundred years since the people of Tennessee elected their first United States Senator by popular vote in 1916.  Prior to that time, senators had been elected by state legislatures.  The framers of the U. S. Constitution had never intended that members of the United States Senate would be elected directly by the people.  The Constitution stated: “The Senate of the United States shall be composed of two Senators from each state, chosen by the legislatures thereof for six years; and each Senator shall have one vote.”  By 1912, twenty-nine states elected their senators on the basis of nominees of each party’s primary or general elections.  With the passage of the Seventeenth Amendment to the Constitution, senators were thereafter elected directly by the people.

Kenneth Douglas McKellar has the distinction of being not only the first Tennessean ever to be popularly elected to the United States Senate from Tennessee, but is also the longest serving senator from our state.  No other person in Tennessee history has ever completed more than three full six-year terms, save for McKellar.  Senators William B. Bate and Isham G. Harris, both former Confederates, had been elected to fourth terms, but each died very soon into their respective fourth terms.  There have been 1,931 men and women to serve in the United States Senate; only 22 have served as long as Kenneth McKellar or longer.  McKellar’s thirty-six years in the United States Senate is still the record for length of service for Tennessee and there is good reason to believe it will be for all time.

To put McKellar’s length of service into perspective, he served for a total of forty-two years in both Houses of Congress; six years as the Congressman from the Tenth District and thirty-six as senator from Tennessee.  McKellar served in Washington, D. C. during the administration of seven Presidents, including that of Franklin D. Roosevelt who was elected four times.  No less than eight other men occupied Tennessee’s other Senate seat during McKellar’s long tenure.

McKellar – – – and Tennessee – – – was fortunate to have served in the Senate during a time when that body venerated and rewarded longevity of service, which in time brought the Tennessean enormous power and influence.  Eventually McKellar occupied the largely ceremonial post of President Pro Tempore of the Senate, a position usually reserved for the Senate’s most senior member.  During the administration of Harry S. Truman, who had succeeded to the presidency following the death of FDR, the vice presidency was vacant.  Truman, himself a former senator from Missouri, knew the power McKellar wielded inside the Senate and shrewdly invited the old Tennessean to sit in on Cabinet meetings.  McKellar was in fact virtually Acting Vice President of the United States, presiding over the Senate, being paid the Vice President’s salary and even having use of the vice presidential limousine and driver.  Yet McKellar, unlike an actual Vice President, retained all the rights and prerogatives of a sitting United States Senator.  McKellar could speak on the Senate floor, as well as vote in committee and on the floor.  McKellar still presided over two Senate committees, including the most powerful of Senate committees, the Appropriations Committee.  Every dollar spent by the U. S. government passed through the Appropriations Committee, giving Kenneth McKellar great influence in directing dollars to Tennessee, which at the height of the Great Depression meant much to a state and people suffering from the nation’s near economic collapse.

It was McKellar’s power as Acting Chairman of the Senate Appropriations Committee that generated perhaps the most famous McKellar story, a tale which has been much repeated through the years.  In fact, Senator Lamar Alexander repeated it again not long ago.  The story has to do with the birth of Oak Ridge as the “Atomic City.”  Essentially the details are the same, although the story has been told with minor variations; it goes that President Franklin Delano Roosevelt summoned Senator McKellar to the White House for a conference.  McKellar was the ranking member of the Senate Appropriations Committee, but the actual Chairman of the committee was Virginia U. S. Senator Carter Glass.  Senator Glass was frequently ill and was rarely in his office or on Capitol Hill, making McKellar the defacto Chairman of the Appropriations Committee.

FDR wanted to discuss a secret appropriation for America’s nuclear project during World War II and asked McKellar if he could “hide” two billion dollars, an astronomical sum at the time, in the appropriations bill.  McKellar, without missing a beat, replied, “Of course I can, Mr. President, but where in Tennessee are we going to hide it?”

In this day and age of campaigns barraging the public with incessant television and radio commercials, inundating people with telephone calls, and a constant flood of emails, it is probably difficult for some readers to conceive during the election for Tennessee’s first popularly elected senator in 1916, radio was not even in wide use.  In an age when one can sit at the computer and with the touch of a single key instantly send a message to a friend or family member globally, it is indeed strange to consider the only direct means of communication at that time was either in person or via the United States postal system.  Doubtless it will come as something of a shock to many that not even mail was delivered to the door of every household in Tennessee.  In many instances, there were tiny post offices dotting small and rural communities and folks would visit the post office, which was also frequently a general store or the like, chat with neighbors, purchase various products and pick up their mail.

Candidates made their appeal to prospective voters through personal contact, shaking as many hands as possible and speaking at the courthouse square in as many of Tennessee’s ninety-five counties as could be managed.  Candidates campaigned in the frequently terrific heat of Tennessee’s blistering summers and usually spoke outside in an age before air conditioning and the people turned out to hear candidates.

Successful candidates for statewide office built up a large acquaintanceship of personal friends and contacts in every community and county.  Candidates were forced to rely upon personal qualities, as they could not be packaged and sold to the voters like toothpaste.  While not every successful candidate was a great orator, it was a time when voices needed to carry across courthouse squares and any candidate with an ability to speak well was better off than not, especially as political gatherings were considered entertainment by much of the public.  A measure of affability and personal charm didn’t hurt either in an age when personal contact was a key ingredient to ultimate political success.

It was customary for candidates to have a campaign headquarters, usually in a hotel, where flyers, posters, buttons and literature of all sorts was handed out to supporters.  $10,000 was an extraordinarily large expenditure for a statewide campaign, which is amazing to consider when that sum would not likely suffice in a race for the County Commission today.

The news of the day came to the public through daily and weekly newspapers and, to a lesser extent, magazines.  Newspapers thrived in that age and there were at least two newspapers published daily in each of Tennessee’s metropolitan areas, usually a morning and evening edition.  Many of the weekly papers had a wide circulation inside their own counties or communities as well.

The daily newspapers in each of the major cities frequently took opposing views on important questions of the day, as well as the different political personalities and parties.  For instance, many readers will recall the old Knoxville Journal, which was edited by the late Guy Smith and was considered to be the “Republican” paper in Knoxville.  Conversely, the Knoxville News-Sentinel was considered the city’s “Democratic” paper.  The Nashville Banner, published by the Stahlman family, was viewed as the more conservative of two leading dailies in the state’s capitol, while the Tennessean, especially after being bought by Silliman Evans, was thought to have perhaps the most liberal outlook in the Volunteer State.  The Tennessean earned a reputation for persistently supporting the candidacies of those politicians viewed as reformers, insurgents and or progressives.

Memphis had the Commercial Appeal and the Press Scimitar, with one paper more favorably disposed toward the tightly organized Shelby County headed by Edward Hull “Boss” Crump, while the other daily naturally hectored the Crump organization and the supporters.

There were no pollsters available to candidates in 1916, meaning the respective candidates could not poll to determine their own strength with the voters, nor could they ascertain through polling data what issues were important to the public and adjust their own views accordingly.  Candidates were necessarily forced to rely upon their own political instincts and beliefs.  Even transportation in a statewide campaign in 1916 was limited, as one could not easily drive from Knoxville to Memphis.  The quickest way to get from Memphis to Knoxville was by train.

Perhaps the most significant difference was voters had to pay a tax to be able to vote.  As we watch the turn out in elections today diminish, it is incredible to think in 1916 Tennesseans paid a poll tax to cast their own ballots.

A Feudin’ Son of Tennessee: Kenneth McKellar Chapter 1 added by design on May 28, 2012
View all posts by design →