By design on July 29, 2012Comments Off on A Feudin’ Son of Tennessee: Kenneth McKellar, Chapter 10 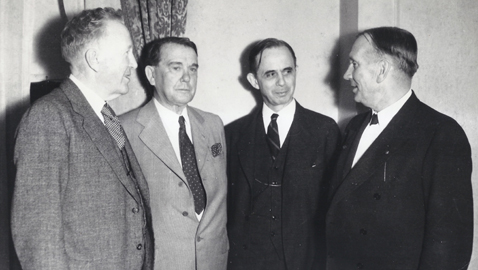 Kenneth McKellar was sixty-five years old in 1934 as he sought reelection to a fourth term in the United States Senate.  Congressman Gordon Browning had thought to challenge McKellar, but decided against it when he could get not a single pledge of significant support.  Instead, Browning opted to run against junior U. S. Senator Nathan L. Bachman, who had been appointed following Cordell Hull’s resignation from the Senate to become Franklin Roosevelt’s Secretary of State.

McKellar and E. H. Crump, leader of the Shelby County political machine, had established control of Tennessee’s elections in 1932 and opponents hoped the 1934 election would have a different result.  McKellar and Crump were supporting Governor Hill McAlister for reelection, as well as Senator Bachman.  McKellar’s support for Bachman was so readily apparent some complained Bachman’s reelection drive was being run from McKellar’s Senate office.  Bachman, an East Tennessean, was a far more inviting target for Congressman Browning than the venerable McKellar.  Browning had served in World War I and had long been active in the American legion, which gave him considerable support from veterans.

Senator McKellar left Washington, D. C. when Congress adjourned in July to return to Tennessee.  Traveling by automobile, McKellar used the opportunity to make campaign stops all along his route.  McKellar’s speeches were less in support of his own candidacy than for those of Governor McAlister and Senator Bachman.  McKellar was personally present when Bachman’s Knoxville campaign headquarters was opened with a grand reception.  Senator McKellar conferred with Democratic leaders in LaFollette before moving onto Rockwood and chatted with constituents during a rainstorm at a local drugstore.

By the second week of July, McKellar was moving through West Tennessee, making a longer and more detailed speech in Jackson where he praised the New Deal, heralded the Tennessee Valley Authority and discussed farm prices.  McKellar returned to his home city of Memphis and caught up on his correspondence, received callers, and kept an eye on the primary campaign.  McKellar left Memphis to speak at the dedication of a project in a rural community near Jackson, which had been built with Federal funds.  McKellar took the opportunity to praise Senator Bachman’s record in an area where Gordon Browning was strong.

Jake Cohen, a local labor leader in Memphis, was also a candidate for Shelby County Register of Deeds.  Cohen was a candidate on the ticket sponsored by E. H. Crump and that same ticket had been endorsed by Senator McKellar.  Cohen helped to sponsor a rally at the Labor Temple in Memphis where McKellar spoke briefly and the senator again had kind words for the New Deal and President Roosevelt.  McKellar fulsomely praised Senator Bachman and Governor McAlister.

Soon after the rally on at the Memphis Labor Temple, McKellar was endorsed for reelection by the Tennessee Federation of Labor, along with Senator Bachman and Governor McAlister.  McKellar closed the primary campaign with a speech on a Memphis radio station.  McKellar reiterated his endorsement of Senator Bachman and Governor McAlister, as well as praised the efforts of the Crump organization for its hard work during the primary contest.  McKellar used the speech as an opportunity to repudiate charges made against Senator Bachman by the Browning campaign.  Bachman, according to Browning, had been less than attentive to his duties as a member of the Senate, as well as his tenure as a member of Tennessee’s Supreme Court.  Senator McKellar outlined Bachman’s strong support for the New Deal, which was virtually a recitation of his own record.  McKellar closed his radio speech by praising Crump.

Opponents of the McKellar – Crump organization were to again be disappointed with the outcome of the primary election.  While no one believed Dr. John R. Neal would come close to defeating McKellar, Neal could only muster forty some odd thousand votes to more than two hundred thousand for Senator McKellar.  Senator Bachman beat Congressman Gordon Browning by more than forty thousand votes and Governor McAlister defeated Lewis Pope, now again a regular Democrat, by almost sixty thousand votes.  Senator McKellar was the biggest vote-getter in the Democratic primary.

The general election featured ghosts of past Tennessee political campaigns as former Republican Governor Ben W. Hooper was again challenging Kenneth McKellar.  The Republican nominee for governor, John McCall of Memphis, withdrew and an attempt was made to revive the old “fusionist” movement that had successfully thwarted Tennessee Democrats in a different era.  Hooper was joined at Nashville’s Ryman Auditorium just after the primary election by Lewis Pope, who had lost the Democratic primary to Governor McAlister.  Pope had lost the nomination to Hill McAlister in 1932 as well and had run in the general election as an Independent.  Pope’s appearance on the platform with Republican Ben Hooper was his announcement he would once again leave the Democratic Party to campaign as an Independent.

The packed audience at the Ryman Auditorium enthusiastically applauded both Hooper and Pope, but the two candidates gave conflicting speeches with Hooper damning the New Deal while Pope praised President Roosevelt.  The meeting was more in the nature of a convention, as the candidacies of both Hooper and Pope were sanctioned by a vote of the audience, nominating Hooper to run for the U. S. Senate against Senator McKellar and Lewis Pope for governor against his nemesis Hill McAlister.  It was the rebirth of the fusionist ticket in Tennessee.

Ben Hooper had been elected governor of Tennessee in 1910 in a fusion movement of Republicans and Independent Democrats.  Hooper had been reelected in 1912 by the same fusionist combine and the fusionists had successfully elected both of Tennessee’s United States senators between 1911 and 1913.  Hooper was a colorful speaker, utilizing Biblical references deftly, once even comparing Crump to “Baal”, one of the false gods mentioned in the Bible.

Hooper and Pope ran as a ticket throughout the general election, touring the entire state, while McKellar, Nathan Bachman and Governor McAlister did the same.  Posters urging voters to “Support the President”, featuring a picture of Franklin Roosevelt, along with the entire Democratic ticket began appearing all over Tennessee.  The appeal of seeing two United States senators and the Governor of Tennessee helped to bring out bigger crowds for the Democratic campaign.

Senators McKellar and Bachman and Governor McAlister opened their joint campaign at Gallatin, Tennessee, speaking at a local school.  Bachman stressed support for the New Deal and Governor McAlister related his achievements as Tennessee’s chief executive.  Senator McKellar spoke last and proved he was an old hand at campaigning by pointing to old Sumner County friends sitting in the audience for special mention.  McKellar flatly declared that support for the President and the New Deal meant support for the Democratic ticket.

McKellar, Senator Bachman and Governor McAlister then set out on a tour of Tennessee by automobile.  The first leg of the tour was in Middle Tennessee where Lewis Pope was thought to be strongest.  The campaign moved along to West Tennessee where McKellar gave several speeches about farm policy.  Following a campaign rally in Jackson which took all day, McKellar was complaining of not feeling well and returned to Memphis.  Whatever his ailment, McKellar was able to rejoin the campaign in a matter of days.

As the campaign progressed, the Democratic nominees concentrated their fire on the fusionist ticket of Hooper and Pope.  Governor McAlister made a speech in McMinnville blistering fusionists and Ben Hooper for having driven the regular Republican nominee off the ballot to make room for Lewis Pope.  Senator Bachman, an ordinarily affable man, attacked Hooper for the former governor’s opposition to President Roosevelt.  McKellar himself defended the Shelby County machine, which was being assailed by both Hooper and Pope for alleged election fraud.  McKellar, speaking in Shelbyville, attempted to dispel the fears of some, by reminding voters he did not consider whom one had supported in his distribution of the vast amount of patronage at his disposal.

Senator McKellar was honored at an event in Wilson County sponsored by the Young Democrats at the courthouse in Lebanon.  McKellar reminded his listeners he had no personal animosity towards Lewis Pope and would have gladly supported him had he been the choice of Tennessee Democrats.  McKellar then made an appeal on behalf of the regular Democratic nominees.

McKellar, Bachman and McAlister moved on to East Tennessee, where they attended a gigantic barbecue in Greenville and headed for a rally in Senator Bachman’s home city of Chattanooga.

Hooper had made a speech in West Tennessee where he poked fun at McKellar for being a bachelor.  Hooper looked at his audience and asked, “By the way girls, do you think a man who has lived to be almost sixty-six years old and remained an old bachelor deserves to be reelected to the Senate?”

McKellar, asked what he thought about Hooper’s gibe, drily replied, “I’ve courted a hundred and one girls, but none of them would have me.  I was in love once and finally got up courage to ask the girl if she loved me.  ‘Kenny, I don’t know whether I love you or not’, she told me.  So I’ve been waiting ever since for her to decide!”

McKellar made a short speech over the radio in Nashville and continued the tour of Middle Tennessee.  At Murfreesboro, another enormous barbecue was held for the Democratic ticket and McKellar spoke to an audience numbering 6,000 people.  The Democratic nominees closed the campaign in Gordon Browning’s home city of Huntingdon.  McKellar made one last speech over the radio in Memphis, again praising his ticket mates, Roosevelt and the New Deal and disparaging fusionism.

Senator McKellar had consistently defended both Bachman and Governor McAlister.  McKellar once said of Senator Bachman, “He is always in the best humor, which is more than I can say for myself.”

Tennesseans responded by giving McKellar, Bachman and McAlister handsome majorities on Election Day.  McKellar would have another six years in the United States Senate.

A Feudin’ Son of Tennessee: Kenneth McKellar, Chapter 10 added by design on July 29, 2012
View all posts by design →