By design on September 9, 2012Comments Off on A Feudin’ Son of Tennessee: Kenneth McKellar, Chapter 16 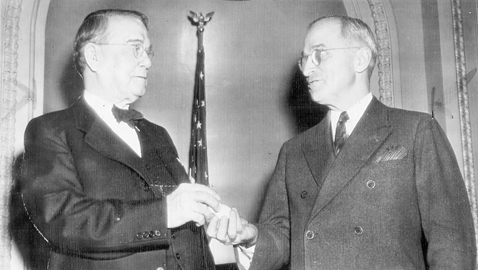 Kenneth McKellar was well established in the nation’s Capitol and by 1942 had served longer in the Senate than any of his colleagues save for E. D. “Cotton Ed” Smith of South Carolina.  He still possessed the piercing blue eyes of his youth, although his once rich brown hair was now flecked with streaks of gray.  Being a bachelor, McKellar was still one of the most sought after guests by Capitol hostesses even as Washington, D. C. social life was restricted by the shortage of housing and rationing of many foodstuffs and gasoline.

Unbeknownst to most, save for those who knew him best, McKellar possessed a very dry wit.  The “Stork Club” was quite a famous restaurant and watering hole in its time, a gathering place for the rich, famous, and downright notorious.  The owner of the Stork Club sent McKellar an ashtray, one of the most highly prized souvenirs from his establishment.  Senator McKellar pretended to carefully inspect the gift before looking up and saying with a wry smile, “Doesn’t he know I’m a bachelor?”

McKellar loved to dance; a passion that had once caused one political opponent to say the Tennessean had accomplished little in Washington except to become known for dancing the Tango in the Capitol.  McKellar liked pretty women and continued dancing well into his seventies.  McKellar also loved movies and it was not unusual for him to see a different movie every night of the week.  Senator McKellar especially loved westerns and after closing his Senate office on the weekends, he could frequently be found in a Washington theater enjoying big screen cowboys Roy Rogers and Gene Autry, an old man surrounded by a sea of youngsters equally enthused about the adventures of their heroes.

McKellar had owned a beautiful home on Peabody Avenue in Memphis, as did Shelby County Boss E. H. Crump.  McKellar’s mother and maiden sisters lived in his home and he maintained it until they passed away.  McKellar sold the house and took an apartment at the Gayoso Hotel when in Memphis.  While in Washington, McKellar had an apartment at the Mayflower Hotel, one of the more prestigious and expensive hostelries in the nation’s Capitol.  Still, McKellar spent more time in his office than anywhere else and at that time, most Congressional offices were open a half day on Saturday.  After his staff had left and most other Senate offices had closed, McKellar would trudge off to the movies.

Senator McKellar was very fond of children and doted on his numerous nieces and nephews.  One friend, a professor at the University of Tennessee, recalled meeting Senators McKellar and Alben W. Barkley of Kentucky as a child.  Both men had reputations; McKellar was considered by many to be curmudgeonly, while Barkley was believed to be the most genial of men.  Much to his surprise, this particular young man discovered McKellar to be the far more cordial and kindly of the two, even producing a peppermint from his pocket.  Barkley was dismissive and gave only the most perfunctory of greetings.

McKellar’s physical appearance caused some to wonder if he did not have a fondness for alcohol.  The Senator’s somewhat bulbous nose, which was usually quite red, caused some tongues to wag, although McKellar was a teetotaler until near the end of his life.  The Senator’s younger brother and Secretary, Don, had a very different view of things and was quite convivial, enjoying both spirits and cigarettes.  As McKellar aged, his doctor prescribed egg milkshakes containing a jigger of whisky for his circulation.  It became something of a joke among the McKellar staff when the Senator would slowly ask if there was whisky in the drink?  McKellar would insist he couldn’t taste the whisky and suggested perhaps he should have another milkshake.

Senator McKellar had a hearty appetite and enjoyed his food and at times, his appearance reflected his love of food.  His late Secretary, W. R. Davidson, recalled occasions when McKellar would polish off a plate of ham and eggs for breakfast and then look wistfully at his empty plate.  The Senator would call for a waitress and, his eyes twinkling, would order a bowl of oatmeal “to fill in the cracks.”

McKellar had been in the Senate for so long his staff simply referred to him as “Senator,” substituting his title for his name.  Most Tennesseans, regardless of how long they had known McKellar, addressed him as “Ken” or “Mack”or by his title.  McKellar tried to dress neatly, but his appearance was usually a bit rumpled.  When he anticipated addressing the Senate, he still wore “morning clothes,” a dark jacket over a vest and striped trousers.  McKellar often wore a black bow tie and usually tucked a white handkerchief in his breast pocket; the handkerchief was almost always embroidered with his signature or initials.

The McKellar temper, which came to be legendary, would be displayed on those occasions the old senator was provoked.  He hated muckraking columnist Drew Pearson and once chased a Pearson employee from his office with his cane.  McKellar possessed an impressive command of invective and would unleash a verbal assault on those who had drawn his ire.  The late Claude Pepper, a Senator and Congressman from Florida, once told me McKellar was a delightful companion, unless the old Tennessean was annoyed.

McKellar, even as he aged, had a reputation for physical altercations and proudly displayed a set of boxing gloves and an honorary membership given to him by the Golden Gloves Society in his office.  There is a tale McKellar once assaulted an allegedly inebriated Silliman Evans, owner and publisher of the Nashville Tennessean newspaper.  Evans and the Tennessean were usually quite hostile to McKellar and took every opportunity to rile the Senator who was widely known for never forgetting a friend nor forgiving an enemy.  McKellar supposedly encountered Silliman Evans when he came off an elevator at the Mayflower Hotel only to find the newspaper publisher standing in front of him swaying back and forth.  Senator McKellar proceeded to rap the diminutive publisher with his cane, sending the diminutive Evans sprawling over a standing ashtray in the hotel corridor.  McKellar sailed off to his own suite of rooms without so much as looking over his shoulder.  McKellar’s temper actually won him the support of at least one important political leader at the beginning of his career, according to Robert Dean Pope, the best of the Senator’s biographers.  McKellar had witnessed an old man confined to a wheel chair being severely jostled by two young people cavorting indoors.  Seeing the disabled old man being knocked about set off the McKellar temper and the future senator grabbed one thoughtless young man and slapped him across the face, while administering a tongue lashing about appropriate behavior.  The old man never forgot McKellar having come to his rescue and the elderly gentleman proved to be a potent supporter when McKellar first ran for Congress in 1911.

The years did not especially mellow the McKellar temper and TIME magazine (which was owned by Republican Henry Luce, husband of the beautiful and tart-tongued Clare Booth Luce), which never had anything good to say about the Tennessean, gleefully reported a dispute between the volatile Senator and Missouri Congressman Clarence Cannon.  In an article TIME wryly labeled, “This Side of the Grave,” the reporter detailed an altercation between two aged and irascible members of Congress.

McKellar was eighty-one years old and Congressman Cannon a mere stripling of seventy-one; McKellar was the Chairman of the Senate Appropriations Committee and Cannon was his counterpart in the House.  The two were meeting with members of their respective committees to smooth out differences in the pending appropriations bill.  The failure of the two Congressional leaders to see eye-to-eye caused the short-tempered McKellar to finally snap at Congressman Cannon.  McKellar proceeded to inform the astonished Missourian he was “blind…stupid…pigheaded…and altogether goddamned.”  Cannon, who was something of a successful feudist himself, was naturally outraged and started to charge the old Tennessee senator who grabbed the long-handled Chairman’s gavel and prepared to swing at Cannon’s head.  Colleagues managed to keep the two old men apart before anyone was actually hurt.

McKellar’s influence in Congress did not diminish with his advancing years, but actually grew.  K. D. McKellar very much remained a force to be reckoned with and even Vice President Henry A. Wallace was not spared when the Iowan carelessly used something less than delicate language in describing one of McKellar’s actions on the Senate floor as a parliamentary “trick.”  Wallace, who disliked the vice president’s constitutional duty of presiding over the United States Senate, would frequently slump disinterestedly in the presiding officer’s chair as senators debated.  McKellar, who was arguing a case relating to the rules of the Senate when the hapless Vice President made his unfortunate comment, turned to face Wallace and roared.

Henry Wallace was remarkably inept as a politician and would suffer the further humiliation of being replaced as Franklin Roosevelt’s running mate in 1944.  The oftentimes-deceitful Roosevelt encouraged Wallace’s hopes of remaining on the Democratic ticket, while at the same time FDR was giving similar encouragement to the parade of hopefuls cluttering his office.  When Harry Truman was nominated for the Vice Presidency, Roosevelt offered Wallace the consolation of a position in his Cabinet, nominating him to serve as Secretary of Commerce, an appointment that was singularly unpopular with many in Congress.  The incumbent Secretary of Commerce, Texas millionaire Jesse H. Jones (whom FDR would refer to derisively as “Jesus H. Jones”), was a favorite of many Congressmen and senators and Jones tried his best to remain in the Cabinet, without success.  Truman inherited Wallace when FDR died and the scrappy little man from Missouri was infuriated when Wallace flitted around the country making speeches about foreign policy.  Not only was the Secretary of Commerce making speeches about foreign policy, but also his talks were critical of Truman’s own foreign policy.  Unlike the late FDR who loathed confrontation, Wallace discovered Truman was far less tolerant and found himself abruptly fired from the Cabinet.

McKellar’s own relations with the new President were complicated, but both would have to deal with the other for years to come.

A Feudin’ Son of Tennessee: Kenneth McKellar, Chapter 16 added by design on September 9, 2012
View all posts by design →