By design on June 17, 2012Comments Off on A Feudin’ Son of Tennessee: Kenneth McKellar, Chapter 4 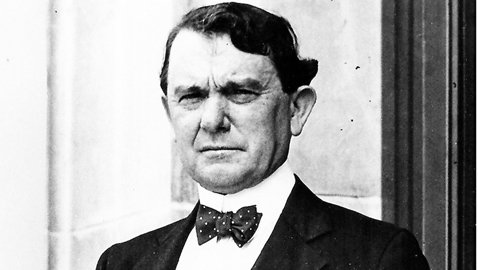 Tennessee Democrats entered the 1910 gubernatorial campaign divided and in disarray.  Many Democrats breathed a collective sigh of relief when the veteran old campaigner Robert Love Taylor agreed to seek the governorship.  Taylor had been Governor of Tennessee no less than three times, once facing his own brother Alf, a Republican, in a campaign that was known as the “War of the Roses” due to the fact each brother’s supporters wore a different colored rose to signify support for his particular favorite.

Despite Bob Taylor’s best efforts, he lost to a little known Republican from Newport, Ben W. Hooper.  Taylor returned to the Senate, but died the following year and many of his friends believed his heart had been broken at having been rejected by the people of Tennessee.

Hooper’s victory was the result of the division inside the Tennessee Democratic Party.  A coalition of Independent Democrats and Republicans referred to as “fusionists” had handed regular Democrats a stunning defeat.  The power of the fusionist combine was undiminished when the General Assembly met to elect a successor to United States Senator James B. Frazier.  Frazier wished to succeed himself, but withdrew when it became clear he could not be elected.  The fusionists supported the owner of the Nashville Tennessean and E. W. Carmack’s former employer, Luke Lea, to be Tennessee’s next United States senator.

The fusionist rule continued for another two years, with Hooper being reelected governor in 1912 and the Independent Democrats and Republicans elected Tennessee’s other United States senator in 1913.

Hooper was finally defeated in 1914 when he sought a third consecutive two-year term.  Tennessee Democrats were elated by the victory of Tom C. Rye and were eager to seek a full measure of vengeance upon Senator Luke Lea whom many considered to be the architect of the fusionist movement in the Volunteer State.

There was no dearth of candidates to replace Lea with Congressmen Cordell Hull, Thetus W. Sims and Kenneth McKellar all testing the political waters.  Former Governor Malcolm Patterson, driven from office after his pardon of a friend who had shot down one of his political opponents, also thought the time was ripe for a comeback.  Neither Hull nor Sims decided to run, but McKellar was being encouraged to run by many Democrats in strongly Republican East Tennessee.

Tennessee Democrats were so anxious to be rid of Luke Lea the primary election was held in 1915, with the general election a year away.  It was also the only known modern instance where Tennessee had a run-off election, meaning there were two primaries, with the two top vote-getters competing in a second primary to determine the ultimate winner.

Considering that both Luke Lea and Malcolm Patterson were polarizing figures to thousands of Tennesseans, it is not surprising McKellar stressed harmony.  With the first primary in November of 1915, McKellar surprised virtually everyone by running first, carrying East Tennessee and his own West Tennessee.  Malcolm Patterson actually carried Middle Tennessee, which was Senator Lea’s own home base.  McKellar had narrowly edged past former Governor Patterson by about two thousand votes, but Luke Lea had been eliminated in the first primary.

McKellar’s showing in heavily Republican East Tennessee was largely due to the influence of U. S. Senator John Knight Shields, himself an East Tennessean.  Senator Shields, despite having originally been elected by the same fusionist coalition as his colleague Luke Lea, had fallen out with Lea and disliked him intensely.  The frequently curmudgeonly Shields liked McKellar personally and with a Democratic administration in Washington, much of the Federal patronage in Tennessee was in the hands of John Knight Shields.  Many of those appointees went to work for McKellar.

The second primary was held in December of 1915 and once again McKellar won the primary, increasing his margin of victory and carrying East and West Tennessee.  McKellar was to remain highly popular in ordinarily Republican East Tennessee throughout his Congressional service.  Some have rewritten history to suggest that it was E. H. Crump who solidified the understanding between Tennessee Democrats and East Tennessee Republicans, but the truth is it was Kenneth McKellar who reached any accommodation between GOP leaders and McKellar’s own faction of the Tennessee Democratic Party.

Republicans in Tennessee, having held the governorship from 1911 until 1915, had not become entirely irrelevant in the Volunteer State by 1916.  The Republicans had not only nominated a serious candidate for the United States Senate, but quite likely their strongest candidate in former Governor Ben W. Hooper of Newport.  Unfortunately for Hooper, McKellar’s nomination for the Senate had the effect of unifying Tennessee Democrats.  Both Luke Lea and Malcolm Patterson were highly controversial figures; both had serious liabilities as candidates and many enemies.  Hooper could quite conceivably have emerged from a contest with Lea or Patterson as the winner.  Without the support of the Independent Democrats, the fusionist cause was dead and the last fusionist in office, Senator John Knight Shields, was supporting McKellar.

The Democratic ticket in Tennessee was bolstered by the reelection effort of President Woodrow Wilson, who was enormously popular in the Volunteer State.  Posters featuring President Wilson, Vice President Thomas Marshall, Governor Tom C. Rye, K. D. McKellar for the Senate, and Colonel B. A. Enloe for the Railroad and Utilities Commission appeared plastered to telephone polls, trees and sat in the windows of store fronts all across Tennessee.

Ben Hooper campaigned hard and made a race of it, winning forty-five percent of the vote.  K. D. McKellar had defeated three of the strongest political figures in Tennessee, Luke Lea, Malcolm Patterson and Ben Hooper, to get elected to the United States Senate.  It was an impressive statewide debut.

Before the passage of the Twentieth Amendment to the U. S. Constitution, a newly elected Member of Congress would be elected in November, but not take the oath of office until the following March.  Any session of Congress following the election would be populated with many members who had just been defeated and the Twentieth Amendment to the Constitution was frequently referred to as the “Lame Duck” amendment.  Sponsored by Nebraska U. S. Senator George W. Norris, the amendment changed the swearing-in date of Members of Congress from March 4 to January 3.  The lame duck amendment was some years away from passage and Kenneth McKellar took the oath of office as Tennessee’s junior United States Senator on March 4, 1917.

McKellar immediately began the practices that would keep him in the United States Senate for the next thirty-six years.  McKellar, a bachelor, was consumed with being the Senator from Tennessee and worked very hard at it.  McKellar’s office was open for business six days out of the week and the senator himself was usually in his office on Sundays as well.  Senator McKellar insisted that every letter from Tennessee be answered the same day it arrived; McKellar replied to all telegrams and telephone calls promptly.  McKellar would frequently personally visit the various departments and agencies of the Federal government on behalf of constituents.  No request from a Tennessean was too large or too small to merit his personal attention.  McKellar soon won a well-deserved reputation for being not only conscientious and persistent, but effective, a reputation that served him well at home and increased his personal popularity with Tennesseans.

As McKellar took his seat in the Senate, America was faced with new challenges, not the least of which was the war raging in Europe.  President Wilson, having campaigned for reelection on the slogan, “He Kept Us Out of War”, was facing increasing pressure to involve the United States in World War I.  Several incidents inflamed American opinion and the United States inched closer to open hostilities with the German Empire.  Wilson tried to remain aloof and keep America neutral, oftentimes in the face of severe provocation.

Former President Theodor Roosevelt, still very popular with his fellow citizens, was one of the more strident voices for war.  Speaking just before the 1916 election, Roosevelt evoked lurid images following the sinking of the luxury liner Lusitania by a German submarine.  The loss of life included American citizens and Roosevelt referred to Shadow Lawn, President Wilson’s vacation home away from the oppressive heat and humidity of Washington, D. C. in his speech.

The United States of America would indeed soon enter World War I; it was to change America and most profoundly Woodrow Wilson and his administration.

A Feudin’ Son of Tennessee: Kenneth McKellar, Chapter 4 added by design on June 17, 2012
View all posts by design →