By design on July 1, 2012Comments Off on A Feudin’ Son of Tennessee: Kenneth McKellar, Chapter 6 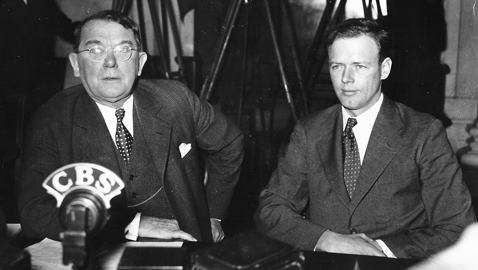 Tennessee’s senior United States Senator, John Knight Shields, proved to be less than thrilled with President Woodrow Wilson’s cherished idea of America participating in the League of Nations. Senator Shields, unlike most Tennessee Democrats, didn’t especially like Wilson much and the President cordially reciprocated Shields’s dislike. Despite being a moralist, Woodrow Wilson was also a very vindictive man. The President had concluded to announce his own antipathy to John Knight Shields when the senator was seeking reelection in 1918. Shields was opposed in the Democratic primary by popular Governor Tom C. Rye and only the intervention of Kenneth McKellar kept the President from publicly denouncing the senior senator. Shields managed to beat Rye narrowly, but as it turned out, Wilson’s action was only delayed for a time.

Senator McKellar was profoundly embarrassed by his intervention on behalf of John Knight Shields. McKellar had spoken to Senator Shields and thought the older man had denied disliking President Wilson and would be supportive of American entry into the League of Nations. After defeating Governor Rye, Senator Shields gleefully told McKellar the President could go straight to Hell.

Wilson’s dream was not meant to be and despite being enfeebled, the President wanted a third term and was deeply disappointed when Democrats nominated Ohio Governor James Cox instead. By 1920, Wilson and his administration were unpopular and it would be the first election in which all American women had the right to vote. Tennessee was the decisive state in securing passage of the Nineteenth Amendment to the U. S. Constitution giving women the right to vote.

An amendment to the Constitution requires ratification by thirty-six states for it to be adopted and the thirty-sixth state in the instance of the Nineteenth Amendment was Tennessee.

Senator Kenneth McKellar had been an advocate of giving women the right to vote and employed a female as his Secretary in his Washington office, which was quite an uncommon practice at the time. A “Secretary” to a U. S. senator would be the equivalent to a Chief of Staff today. Miss Sue Shelton White was not only McKellar’s Secretary, but also an attorney and a strong proponent of women’s rights herself. The Senate had approved the Nineteenth Amendment by a vote of 56 – 25 and by no means were all Tennesseans in favor of giving women the right to vote. McKellar’s senior colleague, the crusty John Knight Shields, had voted against the Nineteenth Amendment. In the House of Representatives, on the vote for final passage of the amendment, Congressmen John A. Moon of Chattanooga, Cordell Hull of Byrdstown, and Finis Garrett of Dresden all opposed suffrage for women.

Perhaps even more importantly, Tennessee’s Governor A. H. Roberts had run on a platform of opposing giving women the right to vote in 1918. As always, politics is a fickle mistress and the changing political tides buffeted Governor Roberts and he feared, if given the opportunity, women would retaliate against him for his opposition to their rights. Miss White, Senator McKellar’s Secretary, wrote a highly publicized letter to Governor Roberts in favor of women’s suffrage. It is highly doubtful she could have done so without the knowledge and express approval of Senator McKellar.

When Delaware’s legislature unexpectedly rejected approval of the Nineteenth Amendment, Tennessee suddenly became the national battleground for women’s suffrage. The pressure on Governor A. H. Roberts was intense and he finally capitulated and announced he would call the General Assembly into special session in August of 1920. The state legislature duly assembled on August 9, 1920 and both those in favor and opposed to ratification of the Nineteenth Amendment had powerful allies participating in the deliberations. Nationally prominent women’s suffragist Carrie Chapman Catt came to Nashville, as did a host of others. Several widely admired Southern women such as Laura Clay of Kentucky and Kate Gordon of Louisiana, both of whom favored giving women the right to vote, but opposed the Nineteenth Amendment as a trespass against state’s rights, tried to influence members of the Tennessee legislature with their arguments.

The men folk were equally active as well with Senator McKellar, Boss E. H. Crump and C. P. J. Mooney, editor of the Memphis Press Scimitar (and interestingly all were from Memphis) urging the legislature to vote in favor of ratification. Crump’s influence was especially important with the Shelby County legislative delegation, all of whom favored ratification of the Nineteenth Amendment.

Senator K. D. McKellar took the unusual step of personally going to Nashville to lobby on behalf of ratification. His Secretary, Miss Sue Shelton White, was also scurrying through the State Capitol, lobbying members. The vote was a s close as could be, a literal tie of forty-eight legislators for ratification and forty-eight against when twenty-four year Republican State Representative Harry Burn of Mouse Creek reversed his position and voted in favor of ratifying the amendment and giving women the right to vote. Still, the amendment would not have achieved the fifty votes required for ratification had not House Speaker Seth Walker outsmarted himself with a failed parliamentary maneuver. Speaker Walker switched his own vote in a bid to kill the measure; instead of killing ratification, Walker’s vote was the magical fiftieth vote need for passage. With Speaker Walker’s unintentional assistance, Tennessee was the thirty-six state to ratify the Nineteenth Amendment to the U. S. Constitution and women in America had the same right to vote in elections as men.

Governor A. H. Roberts, who had feared retaliation at the polls from angry women, was right to be worried. The women folk promptly helped to give Warren G. Harding a landslide victory in the presidential election. Harding even carried Tennessee by 13,000 votes and Governor A. H. Roberts lost to seventy-two year old Republican Alf Taylor. It was also interesting to note two of the Congressmen who had voted against the Nineteenth Amendment on final passage lost their seats as well. John Moon of Chattanooga had served in Congress for twenty-four years and lost to Republican Joe Brown. The highly respected Cordell Hull, representing a solidly Democratic district in Middle Tennessee, was upset by Republican Wynne F. Clouse. The Democrats lost another Congressional seat in West Tennessee where incumbent Thetus W. Sims had lost the primary to young challenger Gordon Browning. Republican Lon Scott beat Browning to go to Washington, D. C. It was one of the worst defeats suffered by Tennessee Democrats in history and one has to wonder if women, voting for the first time, expressed their collective displeasure with those Democrats who had opposed their suffrage at the ballot box.

Senator McKellar was not a candidate in 1920, but faced the voters in 1922, when he sought a second term in the Senate. McKellar had minimal opposition in the primary from a flamboyant attorney who was never a serious candidate and lost badly. McKellar’s opponent in the general election was Newell Sanders, a successful Chattanooga businessman and a leader of Tennessee’s Republican Party. The wealthy Sanders had served briefly in the United States Senate through an appointment from Governor Ben W. Hooper following the death of Senator Robert L. Taylor. Sanders was highly influential in national and state Republican Party affairs, but he proved to be a poor candidate.

1922 was the first year in which candidates made use of radio in campaigning in Tennessee. Both Senator McKellar and Democratic gubernatorial nominee Austin Peay appealed for votes during radio broadcasts. Newell Sanders was not a good public speaker, but he campaigned as a staunch conservative and a supporter of the Harding administration. Sanders clearly considered Senator McKellar to be a dangerous radical and an opponent of big business. McKellar campaigned with Peay, who faced incumbent Republican Governor Alf A. Taylor and the Democrats worked hard to reclaim the Congressional seats lost in the 1920 election. It was a sweeping victory for Tennessee Democrats; McKellar beat Sanders badly and Peay edged out Governor Taylor. Cordell Hull reclaimed his seat in Congress and Sam D. McReynolds won the Congressional seat based around Chattanooga. Gordon Browning had once again been nominated by the Democrats of his district and had defeated Republican Congressman Lon Scott.

The decade of the 1920s was in many ways a dismal time for Democrats. The Republicans dominated the Congress, as well as the presidency. McKellar was oftentimes a fierce critic of the Republican administrations and especially so of Herbert Hoover. McKellar had been especially appalled when Hoover had carried Tennessee in 1928. Today it is all too easy to forget how astonishingly popular Herbert Hoover was at that time; he was considered to be some sort of wunderkind and had never been elected to any office prior to being elected President of the United States. Hoover had been Secretary of Commerce in the administrations of both Presidents Warren Harding and Calvin Coolidge. Hoover had won a smashing victory in the presidential contest, defeating New York Governor Alfred E. Smith and even managed to carry several Southern states, including Tennessee, Florida, Texas, North Carolina and Virginia. Of course Smith was an urban Democrat, spoke with a pronounced New York street accent, was profoundly “wet” in his politics and a practicing Catholic in his religion, none of which was especially appealing in the Protestant and dry South.

The decade of the 1920s also brought changes to Tennessee and machines in Memphis and Nashville were making their power known in statewide races. The political partnership of Senator K. D. McKellar and Ed Crump would be one of the most durable and dominant forces in the history of Tennessee politics.

A Feudin’ Son of Tennessee: Kenneth McKellar, Chapter 6 added by design on July 1, 2012
View all posts by design →