By design on July 15, 2012Comments Off on A Feudin’ Son of Tennessee: Kenneth McKellar, Chapter 8 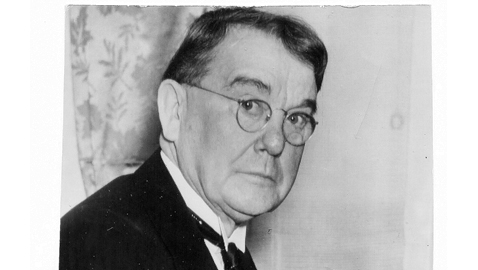 The collapse of the House of Caldwell not only destroyed Governor Henry Horton politically, but Luke Lea as well.  The governor, by the slimmest of margins, only narrowly escaped being impeached.  The fall of Caldwell and Company would have far reaching implications for Luke Lea, not only politically, but also financially and personally.  Lea’s publishing empire would likewise collapse and he would lose control of his beloved Nashville Tennessean.  Worse still, Lea would eventually go to prison.

The political demise of Henry Horton and Luke Lea would leave a vacuum in Tennessee politics, which was soon filled by Senator Kenneth McKellar and E. H. Crump.

1932 brought about not only the election of Franklin Delano Roosevelt as President of the United States, but the elections in Tennessee would solidify the McKellar – Crump alliance into the dominant political force in the state for more than a decade.  Both McKellar and Crump had backed former State Treasurer Hill McAlister in his bids to unseat popular Governor Austin Peay and McAlister wanted to run yet again in 1932.  McAlister had been one of the state legislators who had supported McKellar for the United States Senate in 1913 in the General Assembly.  While McKellar had not been elected, he had not forgotten McAlister’s support and was quite friendly with McAlister.  McKellar induced Crump to lend his own support to McAlister in a hotly contested Democratic primary that became something of a brawl.

McAlister faced Lewis Pope, who had been a respected member of the late Austin Peay’s Cabinet, and former Governor Malcolm Patterson was attempting yet another political comeback.  Luke Lea, desperately trying to retain his influence, had maneuvered most of what was left of the state machine behind Patterson’s campaign.  Patterson was then a local judge in Shelby County and while still quite controversial, was no longer the staunch opponent of prohibition he had once been; in fact, Patterson had completely reformed and was a leading lecturer on behalf of temperance.

Patterson had gone through another more sordid scandal after having been found drunk in a Nashville brothel.  Patterson cried Nashville Mayor Hillary Howse, leader of a potent political machine in Davidson County, had framed him.  It was an embarrassing episode and the fact Luke Lea would back so polarizing and disreputable figure as the aging former governor indicated just how frantic he was to hold on to the vast power he had acquired during the administration of Henry Horton.

McAlister, who had always run strong in Tennessee’s urban areas, squeezed out a victory in the Democratic gubernatorial primary, but Lewis Pope immediately charged he had been deprived of the nomination by voter fraud.  Pope’s accusations were dismissed by the Democratic State Executive Committee, which certified the nomination of Hill McAlister.  Pope responded by announcing he would continue his gubernatorial campaign in the general election as an Independent.

Pope wrote Senator McKellar to complain he had been cheated out of the nomination and McKellar wrote back a lengthy letter refuting Pope’s allegations.  Pope claimed forces opposed to the veteran senator had brought about McAlister’s nomination.  McKellar’s popularity was such in Tennessee that he had supporters who backed each of the three candidates in the Democratic primary.  McKellar himself had supported McAlister and the senator was a highly partisan Democrat and naturally backed the entire ticket.  Pope’s independent campaign caused state Democrats some concern, but McAlister won a comfortable victory on Election Day.  Pope later began petitioning Senator McKellar for a high paying Federal appointment when the Democrats came back to power.

The Democrats won huge majorities in both houses of Congress and McKellar’s seniority made him the Chairman of the Post Office and Post Roads Committee, as well as the ranking member of the powerful Senate Appropriations Committee.  While the Post Office Committee was a rather minor assignment, it gave the Tennessean enormous clout in naming postal employees right down to fourth-class letter carriers.  With the advent of the New Deal and Roosevelt’s “alphabet” agencies, there was a tremendous amount of Federal patronage to distribute in Tennessee.  Like virtually every other state in the country, Tennessee had been devastated by the Great Depression and McKellar’s office was flooded with letters and telegrams from desperate Tennesseans seeking jobs.

McKellar’s colleague in the United States Senate, Cordell Hull, had been tapped by Franklin Roosevelt to serve as Secretary of State.  Hull accepted the prestigious position, leaving his Senate seat vacant, a vacancy to be filled by the newly elected Governor of Tennessee, Hill McAlister.  Senator McKellar himself doubtless had some say in who would serve with him in the Senate and Governor McAlister appointed Nathan L. Bachman, a former Tennessee Supreme Court Justice, to fill the vacancy caused by Hull’s resignation.

Bachman was a very pleasant and affable man and worked well with his senior colleague.  Both loyally supported almost every New Deal measure sent to the Congress by President Roosevelt, yet it was not long before FDR deeply disappointed Senator McKellar.  Roosevelt chose Nebraska U. S. Senator George W. Norris to introduce the legislation creating the Tennessee Valley Authority, instead of McKellar.  Norris had been a progressive Republican until he became an Independent in 1928 when he endorsed Al Smith over Herbert Hoover.  Norris made something of a career out of being a political maverick and Norris had openly endorsed Franklin Roosevelt over Hoover in 1932.  Roosevelt, second to none in his skillful handling of political matters and people, shrewdly courted the old progressive.

McKellar later referred to FDR’s decision to have Senator Norris sponsor the TVA legislation as his greatest disappointment in his long Congressional career.  McKellar managed to choke down his bitterness and it fell to the Tennessean to protect the fledgling agency in its infancy.  Most Republicans and many conservative Democrats were philosophically opposed to the Tennessee Valley Authority and securing appropriations for the TVA was frequently a challenging task.  McKellar artfully used his perch on the Senate Appropriations Committee to defend and protect the TVA, as well as keep a steady flow of Federal dollars coming to Tennessee.  McKellar’s prowess in protecting the Tennessee Valley Authority caused him to be labeled “the rich Uncle of TVA.”

Many of the battles fought over funding for the TVA were won by a single vote.  McKellar’s influence was critical in the construction of various dams and TVA projects.  McKellar’s success in Washington naturally made him even more popular at home in Tennessee.

McKellar, being the senior United States Senator from Tennessee, controlled virtually all of the considerable Federal patronage generated by the New Deal.  Senator Bachman routinely concurred with McKellar’s choices, although McKellar was careful to consult with his junior colleague.

The governor’s office was equally important to McKellar.  With Henry Horton out of office, McKellar and Crump had a friendly governor for the first time in more than a decade.  McAlister swept out those Democrats loyal to Henry Horton and Luke Lea, replacing them with Democrats whose allegiance belonged largely to McKellar.  The former state machine was merged with the political organization created by Senator McKellar and Boss Crump, making it extraordinarily powerful.

The dominant force in Tennessee politics was the alliance between Senator Kenneth McKellar and E. H. Crump, master of the Memphis machine.  It would be impossible to understand the context of the McKellar and Crump partnership without first understanding the two were personal friends.  Many modern historians have dismissed Kenneth McKellar as one of Crump’s “lieutenants” or a mere lackey, neither of which is remotely true.

Professor William R. Majors, biographer of Governor Gordon Browning, wrote an insightful analysis of the McKellar – Crump relationship.  Professor Majors noted that “a man with McKellar’s temperament and personality could not accept second place to anyone.”  Both Senator McKellar and Mr. Crump were highly sensitive men and McKellar especially tended to view differences in the most personal terms.  And McKellar and Crump most certainly did have differences.

McKellar would consult Crump, as he consulted other important Democrats across Tennessee, about patronage and political appointments, but the senator was not seeking Crump’s permission nor did McKellar mind making an appointment to which the Memphis Boss objected, even in Shelby County.

E. H. Crump was a larger than life figure, flamboyant, excessively shrewd in his assessment of both politics and human nature.  Crump thoroughly understood public relations and public perception.  Crump had remarkable energy and a particular genius for organizing.  Professor Majors points out that while Crump habitually wrote vitriolic letters to those associates and opponents who had displeased him, Senator McKellar was never the recipient of such a letter himself.  Majors cites an instance where Crump angrily wrote Tennessee’s junior U. S. Senator Tom Stewart, castigating Stewart for a recent vote in the Senate and the Memphis Boss threatened to withhold the support of the Shelby County machine in the next election.  Crump’s letter to Senator McKellar, whose vote was identical to that of Senator Stewart, was a meek observation, “We were a little surprised by your vote.”

Even the Memphis Boss treated Tennessee’s senior senator with respect and deference.

A Feudin’ Son of Tennessee: Kenneth McKellar, Chapter 8 added by design on July 15, 2012
View all posts by design →