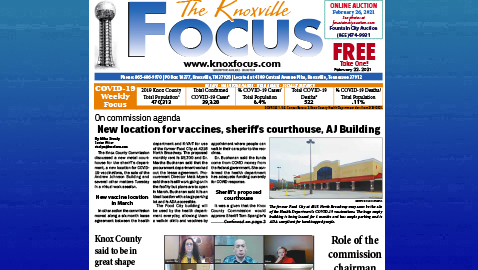 The Knox County Commission discussed a new metal courthouse for the sheriff’s department, a new location for Covid-19 vaccinations, the sale of the Andrew Johnson Building and several other matters Tuesday in a virtual work session.

In other action the commission moved along a six-month lease agreement between the health department and K-VA-T for use of the former Food City at 4216 North Broadway. The proposed monthly rent is $5,700 and Dr. Martha Buchanan said that the procurement department worked out the lease agreement. Procurement Director Matt Myers said there is still work going on in the facility but plans are to open in March. Buchanan said it is an ideal location with a large parking lot and is ADA accessible.

The Food City building will be used by the health department everyday, allowing them a walk-in clinic and vaccines by appointment where people can wait in their cars prior to the vaccines.

Dr. Buchanan said the funds come from COVID money from the federal government. She confirmed the health department has adequate funding currently for COVID response.

It was a given that the Knox County Commission would approve Sheriff Tom Spangler’s request for a $1.5 million metal court facility at the county jail. He has said the facility, with sections for several hearings and trials, would save the county about $100,000 each year in transporting prisoners from the jail to the courtrooms in the City-County Building.

But during public forum Eric Lutton, Knox County’s Public Defender, questioned the use of the proposed facility beyond the COVID-19 pandemic. Lutton said the facility, planned to open by September if approved, could not by law hold some hearings that must be done before a judge.

“You cannot accept a plea made remotely,” he said, referring to “Rule 43” in the state law. Sheriff Spangler replied that all the local judges support holding virtual hearings at the proposed facility and said he sees the governor’s emergency order continuing.

Criminal Court Clerk Mike Hammond defended Spangler’s proposal and said “absolutely” the building would be used. He said virtual hearings have a history at the current facility and the new building would have better computer reception.

Currently the Tennessee Supreme Court has ruled to allow virtual hearings. Commissioner Terry Hill said she would hate to see the building go up and the Supreme Court go back to requiring in-person court hearings.

The matter was moved to today’s meeting with “no recommendation.”

Sheriff Spangler also said the main jail facility in Maloneyville is switching to a new provider for inmates to call relatives and their attorneys. Inmate Calling Solutions LLC, doing business as ICSolutions, will help raise funds for the department. Commissioner Carson Dailey commented that the jail does not supply tablets to inmates despite rumors saying otherwise.

Also on the agenda

The postponement of the Andrew Johnson Building sale to BNA Associates LLC  was passed on to the regular meeting without discussion.

Carter Park improvements totaling about $232,600 were approved with Kimley-Horn to bring the park and buildings there into ADA compliance for handicapped use.

The commissioners also approved a resolution asking members of the Tennessee General Assembly to set up a special tax area within 1/4 mile radius of the proposed new baseball stadium near the Old City.

Commissioner Dasha Lundy asked that February be declared “Black History Month” and challenged everyone to promote inclusion and equality. She cited concerns among the African-American community about poverty and a fear of how the proposed new baseball stadium would affect their neighborhood.