By design on February 3, 2013Comments Off on Knoxville Focus for Monday, February 4 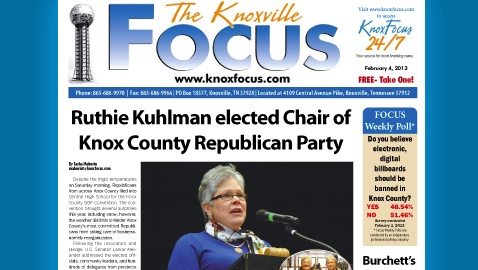 By Tasha Mahurin
mahurint@knoxfocus.com
Despite the frigid temperatures on Saturday morning, Republicans from across Knox County filed into Central High School for the Knox County GOP Convention. The convention brought several surprises this year, including snow; however, the weather did little to hinder Knox County’s most committed Republicans from taking care of business- namely reorganization.
Following the invocation and pledge, U.S. Senator Lamar Alexander addressed the elected officials, community leaders, and hundreds of delegates from precincts throughout Knox County who were present.
“I learned a long time ago that the heart and soul of the Republican Party in East Tennessee is in Knox County,” Alexander told those present.
Alexander also took a moment to campaign for his next election and, like all politicians whose speeches are generally woefully predictable, made a quick joke encouraging delegates to be mindful of who they vote in as chair, because they would undoubtedly be forced to listen to their speech at the next Lincoln Day Dinner.
Other than the outgoing leadership’s less than subtle attempts to manipulate the outcome of the vote, the most surprising moment of the three hour long event came when Knox County Mayor Tim Burchett stepped up to the microphone. Just after giving a proclamation in the memory of former County Commissioner and Halls Shopper publisher Mary Lou Horner, Burchett asked if he might ask a question of the delegation present.
“If you support an elected school superintendent, please raise your hand?” Burchett asked. The response was unanimous among the crowd; a motion was then made to make the desire to see an elected school superintendent in Knox County the official position of the Knox County Republican Party regarding the matter.
Following a ballot/roll call vote, Ruthie Kuhlman was voted in as the new Chairwoman of the Knox County Republican Party, handily defeating challengers John Gabriel and Buddy Burkhardt.  Following a nomination from Ray Jenkins, Burkhardt was selected to serve as First Vice Chair.

Knoxville Focus for Monday, February 4 added by design on February 3, 2013
View all posts by design →