By design on December 23, 2012Comments Off on Burton K. Wheeler of Montana 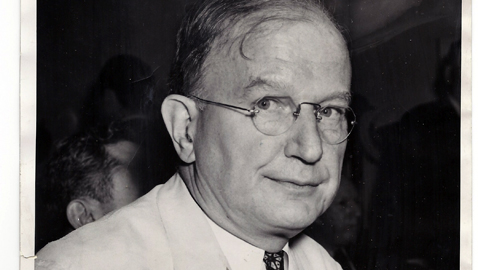 Few members of the United States Senate had as colorful or stormy a career as Burton Kendall Wheeler of Montana.  The fact Wheeler came to represent Montana in the Senate in the first place was an accident of fate, as Wheeler had been born in Hudson, Massachusetts on February 27, 1882.  Wheeler had left Massachusetts to attend the University of Michigan law school.  Burt Wheeler and his new law degree were headed to Seattle, Washington when he happened to disembark from the train in Butte, Montana.

It was while Wheeler was waiting for the next train that he engaged some locals in what he thought was a harmless game of poker and managed to lose every cent he had in the world.  Burt Wheeler decided to remain in Butte to recoup his earnings and was soon a reasonably prosperous attorney.

Burton K. Wheeler was the sort of fellow who attracted attention and by 1910, Wheeler had been elected to the Montana legislature.  Politics in Montana revolved around special interests such as the gigantic Anaconda Copper Mining Company.  The mining barons were an undeniable fact of political life in Montana and Senator William Clark was one of the wealthiest men in the country; in fact, Clark’s daughter Huguette just recently died at age 104, leaving behind a fortune of some $400 million.  Burton Wheeler was a fierce opponent of the mining interests and an advocate for the workingman.  The mining companies happened to own several newspapers in Montana, which were of course expected to toe the company line and promote those politicians who owed their allegiance to the mining companies.  Burt Wheeler relished his feuds with the companies and when he was named U.S. Attorney, he refused to indict any Montanan for sedition, which was rare during World War I.  Wheeler was a candidate for governor in 1920 and the mining companies grew so alarmed one would have thought Wheeler’s election was the end of the world.  Wheeler lost to former U. S. Senator Joseph M. Dixon, himself an old Teddy Roosevelt Progressive Republican.  Despite having lost to Dixon in 1920, Wheeler ran for the United States Senate in 1922 and was elected.  Wheeler’s contrary nature was once again in evidence when he bolted his own political party to run on the Progressive ticket with Wisconsin U. S. Senator Robert M. LaFollette in 1924 against President Calvin Coolidge.  Although the Progressive outran Democrat John W. Davis throughout much of the country, especially in the western United States, it carried only LaFollette’s Wisconsin.  Wheeler returned to his Senate duties and faced former governor Joseph M. Dixon in the 1928 election.  Wheeler won handily and by 1932 was strongly advocating the nomination of New York Governor Franklin Delano Roosevelt for President.  Wheeler was delighted by Roosevelt’s election and supported much the New Deal legislation proposed in the Congress.

Wheeler’s break with Roosevelt occurred when FDR proposed to enlarge the U. S. Supreme Court in 1937.  Burton Wheeler became the unofficial leader of those Democrats in the Senate opposed to the packing of the Supreme Court.  Wheeler was a shrewd and dangerous opponent and FDR’s plan was thwarted and relations between the two men, which had been warm previously, deteriorated considerably.  Wheeler’s wife, Lulu, was a very direct and plainspoken woman and her acidulous comments about FDR reached the president’s ears and they were anything but flattering, causing FDR to mutter darkly that Mrs. Wheeler was the “Lady Macbeth” in the Wheeler household.

Wheeler was enough of a national figure to be considered a viable candidate for the Democratic nomination for president in 1940.  There was intense jockeying for position amongst prospective candidates while FDR shrewdly said or did little to indicate he would be a candidate for an unprecedented third term.  Naturally, there was continual speculation Roosevelt intended to run for a third term and FDR himself insisted he wanted nothing more than to return to his home on the Hudson River in Hyde Park.  Wheeler’s presidential candidacy evaporated when it became clear FDR would be “drafted” to run again by Democrats fearful of a ticket without the vote-getting prowess of Franklin Roosevelt.

The Montana senator’s relations with FDR were further impaired by their differences over foreign policy.  President Roosevelt watched with growing alarm as German dictator Adolf Hitler’s appetite for new territory seemed to warn of war.  Burton Wheeler was an isolationist, preferring for America to remain aloof from events in Europe.  Wheeler’s own opinions about foreign policy were quite likely the majority opinion in the country at the time and FDR had to play a careful and devious game to do what he could to aid the Allies once war had broken out.

Senator Wheeler became one of the most notable speakers for the isolationist organization America First, which was dedicated to keeping the United States out of the European war.  Wheeler was perhaps only eclipsed by famous aviator Charles Lindberg as a spokesman for isolationism before the United States was attacked by the Japanese Empire.  Wheeler was one of the few senators with a national reputation and as Chairman of the Senate’s Interstate Commerce Committee, he began an investigation into the propaganda practices of Hollywood moviemakers.  Virtually all of the heads of the big Hollywood movie studios were Jewish and Wheeler questioned why foreign-born citizens were attempting to alter American opinion and some tried to label Wheeler as an anti-Semite.

By 1941, Britain was barely hanging on against a determined assault by the Germans, but Burton Wheeler adamantly opposed any aid to Britain and insisted the United States follow a policy of strict neutrality.  When Roosevelt’s lend-lease program reached Congress in January of 1941, Wheeler was one of the loudest voices in Congress opposing the measure, saying if approved, it would “plow under every fourth American boy”, a choice of words that especially infuriated President Roosevelt.

Less than two months before Pearl Harbor, Senator Wheeler opined he didn’t believe the Japanese were “crazy enough” to dare a war with the United States.

Following the attack on Pearl Harbor by the Japanese, Burton Wheeler wisely voted for declaring war on the Axis powers and said it was the duty of every American to “lick the hell out of them”.

Burton Wheeler strength back in Montana had remained largely undiminished by his foreign policy pronouncements.  Wheeler was annoyed when his Senate colleague James E. Murray no longer followed his lead on foreign policy questions.  Wheeler had won the general election in his 1940 campaign with almost seventy-five percent of the vote and had barely even bothered to campaign.  Wheeler’s influence extended into the other Congressional races in Montana and gave birth to what was referred to as the “bipartisan machine”, a combination of Republicans and Wheeler Democrats.  Wheeler gave quiet support to eliminate those Democratic colleagues whom he considered interventionist.  When Senator Murray was running for reelection in 1942, Wheeler again gave his support to the Republican candidate behind the scenes.  Murray was barely reelected, a severe disappointment to Burton Wheeler.

By 1946 Wheeler’s influence had ebbed and many formerly isolationist members of Congress found themselves in difficulty with their constituencies.  North Dakota Senator Gerald Nye, a close ally of Wheeler, had been beaten in 1944.  When Wheeler returned to Montana in 1946, he noted in his autobiography that he noticed a difference in the attitude of many Montanans toward him.  Wheeler was facing a challenge in the primary from Leif Erickson, who was a former Justice of the Montana Supreme Court and had been the Democratic nominee for governor in the 1944 election.  Erickson was campaigning against Wheeler, telling Democrats Burt Wheeler was no longer the strong liberal he had once been.  Senator Wheeler had seriously underestimated the appeal of Erickson and what he had originally thought to be yet another easy reelection campaign was clearly becoming a hard fought race.  Wheeler’s Senate colleague, James E. Murray, remembering Wheeler having tried to defeat him in his own reelection campaign, was supporting Erickson.  Wheeler’s investigation into Hollywood propaganda caused significant contributions to flow into Erickson’s campaign coffers from California.  Once considered to be so liberal that he had been labeled a socialist or worse, Burton Wheeler was viewed by many as being a reactionary Democrat.

Harry Truman, a good friend of Wheeler’s while they served in the Senate together, tried to help his old colleague by sending a letter to the chairman of Wheeler’s reelection campaign and decrying the “smear” attacks on Wheeler’s record.  FDR had his revenge on the Montana senator from the grave through the voice of his son James who endorsed Leif Erickson.

Although both camps confidently predicted victory on Election Day, Wheeler lost by about 5,000 votes and his defeat ended his political career.  Still, Wheeler’s bipartisan machine had its last gasp when Montana voted to replace Wheeler not with Leif Erickson, but a Republican, Zales Ecton.

Wheeler was encouraged to run for the Senate again in 1948 against James Murray, but he had settled into a very successful law practice in Washington, D. C. and refused.  It was not to be the last time Burton K. Wheeler was urged to return to electoral politics; Montana Republicans tried hard to recruit the former senator as a candidate against Mike Mansfield in 1958 despite the fact Wheeler was then seventy-six years old.

Burton Wheeler had kept his law practice alive while serving in the Senate, but engaged in his occupation full time after his defeat in 1946.  Wheeler opened an office with his son Edward and while he kept a vacation home in Montana’s Glacier Park, he continued to live in Washington, D. C. until his death on January 6, 1975 at age ninety-two.  Wheeler did not even return to Montana in death, as he was buried in Rock Creek Cemetery in Washington, but his legacy lives on in the Big Sky state where the University of Montana has a Burton K. Wheeler Center.

Burton K. Wheeler of Montana added by design on December 23, 2012
View all posts by design →