By design on September 22, 2013Comments Off on Camille Kelley: ‘The Little Irish Judge’ 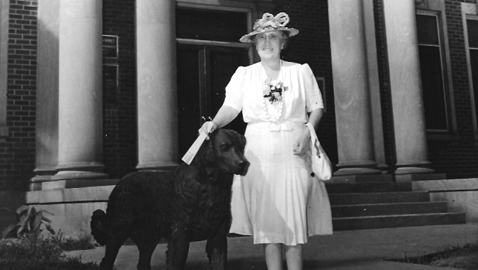 One of the more fascinating, as well as disturbing, stories in Tennessee history is that of Camille Kelley who became Judge of the Memphis Juvenile Court. A widow, Camille Kelley was a star in the crown of the Crump machine and when she assumed the bench, she was one of only two female judges in the South and the first woman to be a judge of the juvenile court. A plump, matronly woman with a pleasant smile and given to wearing nice clothes and a flower pinned to her ample bosom, she was also almost certainly corrupt.

Camille Kelley, one of the most prominent members of the Crump machine, would go from national recognition to a suspect in one of the most despicable and lurid scandals in Tennessee history.

Born the daughter of a physician and like many at the time, coy about her actual age, Camille McGee attended medical school for a couple of years before she chose to marry a successful attorney, Thomas Fitzgerald Kelley. Her husband had died by the time she ascended the bench in 1920. Camille Kelley was not a lawyer, but she seemed like a good choice to serve as Judge of the Juvenile Court, at least to Edward Hull Crump, master of the Memphis political machine. Crump and his political ally, Senator Kenneth D. McKellar, were strongly in favor of rights for women, which meant the entire machine favored increased rights for women. Crump and especially McKellar worked hard to give women the right to vote in Tennessee.

It was just after Tennessee ratified the Nineteenth Amendment to the Constitution that Camille Kelley became Judge of the Shelby County Family Court. It allowed the Crump machine to appear progressive and compared to most political organizations, especially in the South, it was. The Memphis Boss had cobbled together virtually every aspect of Memphis’s social life to comprise his political machine. Business, labor, public employees all played important roles in the machine, which extended to the PTA and beyond. Several high ranking members of the Crump machine were Jewish, notably Will Gerber and Abe Waldauer; Crump even encouraged African-Americans to vote, a fact which frequently outraged the machine’s opponents. As judge of the Family Court, Camille Kelley was not only a demonstration the machine was progressive, but believed in the ability of women to serve in office. Judge Kelley herself commented that women really belonged in the home rather than elective office, but she remained on the bench for thirty years and only resigned when details of a sordid public scandal began to emerge.

As one of the few women in America to serve as a judge, Camille Kelley attracted national attention. Kelley delighted in sharing her opinions about child rearing and just about everything else, which were usually in the form of homilies. Never wearing a robe into her courtroom, Judge Kelley explained, “Robes would scare the children to death.” Kelley went on to explain the corsage pinned to her breast: “They’re not so timid when they see that I am wearing a flower.”

Eventually, Judge Kelley would publish three books chock full of her opinions, witticisms, and advice. The first, “A Friend In Court,” was published in 1942. Five years later, the judge penned “Delinquent Angels,” followed by Kelleygrams in 1949.

Kelley’s grandmotherly appearance, despite her love of fine clothes, furs and flowers, made her seem anything but threatening. Despite her lack of formal education, Judge Kelley was clever in her understanding of public relations. Following her original appointment to the bench, Camille Kelley was routinely elected by the people of Shelby County on the Crump ticket. Unlike some of her ticket-mates, Kelley was so popular, she rarely ever had opposition.

Jennifer Ann Trost has written an interesting book, “Gateway to Justice: The Juvenile Court and Progressive Child Welfare In A Southern City,” which contains much information about Camille Kelley.

Ms. Trost points out the Shelby County Family Court “cannot be understood without examining the life and ideas of its chief judge, Camille Kelley. So much of what the juvenile court was and subsequently became was defined by her philosophy and personality.”

As Ms. Trost points out, Camille Kelley was quite contradictory about her own role, as well as that of other women in public life. Kelley opined, “No woman should enter public life if it makes her less a woman, for there is no height to which she may climb equal to real home making or wifehood or motherhood.” Yet Judge Kelley acknowledged the need of many families for two incomes and she staunchly defended the right of women to work outside the home, but Kelley also excoriated many working mothers for neglecting their responsibilities at home.

“A mother in the home is of greater value to a child than money in the bank,” was Judge Kelley’s lofty opinion.

Apparently Camille Kelley had fixed opinions about most everything and never doubted her own wisdom. Kelley believed girls were more difficult than boys and one Memphis newspaper told its readers, “Nor does a boy have to be a ‘sissy boy’ to be a good boy – – – in fact Judge Kelley doesn’t care for ‘sissy boys’. She likes boys who are manly, boys who are ‘reg’ler fellers’.”

Although some black youngsters complained of harsh treatment while in the custody of the Shelby County Family Court, Ms. Trost notes Judge Kelley did not attempt to mete out different or harsher punishments to African-American children than she did to white youngsters. In fact, Camille Kelley apparently sought to better conditions for African-American children. Ms. Trost writes, “For her, the condition of childhood necessitated protecting black children as well as white children.”

Judge Kelley believed “love is the modern way to educate children” and frowned upon parents spanking children, declaring it to be not “the scientific, advanced method” of discipline in the home. To say the least, that was quite a progressive view at the time.

Being one of the very few female judges in the country, Camille Kelley drew considerable attention not only in Memphis, but nationally. Judge Kelley was the recipient of several national awards and was regularly invited to appear on radio and television programs. By the time she resigned in 1950, Camille Kelley’s service on the bench was fodder for a Hollywood production company which intended to produce both a movie and a television series about her work.

Although certainly a member of the Crump machine, the Memphis Boss was content to let Kelley rule her own domain. Kelley herself boasted her court was untouched by politics. Judge Kelley condescendingly stated she did not participate in the sordid political arena, opining that women should not “supplant the men in public jobs they have held for hundreds of years. Women are capable, of course,” she added, “but we can’t spare them. We need them to concentrate on child welfare and education, work we are inherently better fitted to do than men.”

When she was finally forced out of office, Judge Kelley told the mayor, “No political interference has ever touched the inside of my courtroom, so help me God.” That was not entirely true.

As Jennifer Trost describes in her book, one of Judge Kelley’s trusted aides was fired at the insistence of one of Memphis’s City Commissioners. The public perception of Judge Camille Kelley was such that local newspapers roared their collective fury at the offending City Commissioner with blaring headlines demanding “Hands Off Judge Kelley’s Court” and “Free the Juvenile Court of Interference.”

The official fired from the court was Beulah Wood Fite who was the chief probation officer for the Shelby County Family Court. The working relationship between Judge Kelley and Ms. Fite was apparently quite close, as after Kelley was widowed, Ms. Fite moved into the judge’s home. Another employee from the juvenile court, one Altye Barbour, who presided over the mental exams given the children, also moved into Judge Kelley’s home.

Fite was evidently well liked by many of the children whom she encountered in the course of her professional life and was generally referred to as “Mamma”. Unfortunately for Ms. Fite, she was less well liked by some of the adults she worked with. Ms. Fite was not above chastising anyone she believed to have made a mistake, which extended to other officials. Described as having a “brusque” personality and regularly scolding parents whom she felt had done less than a stellar job with their children, Ms. Fite’s forceful personality caused her to run afoul of the City Commissioner who demanded she be fired. A serious flood in 1937 caused the Memphis Red Cross to request children in the custody of the juvenile court to be moved to a location it considered safer. Ms. Fite arbitrarily rejected the request, which caused the City Commissioner to demand the Juvenile Court Advisory Board to dismiss her immediately.

Jennifer Trost writes that “Kelley was strangely silent about losing one of the best-qualified members of her court.” Yet there is an explanation for Judge Kelley’s silence. It is difficult to imagine any member of the City Commission to have demanded Ms. Fite’s resignation without the express consent of Mr. Crump. Memphis and Shelby County was E. H. Crump’s domain and it is not hard to believe the Memphis Boss would have been less than amused by a minor official haughtily rejecting a request by the Red Cross. Had Crump sanctioned Ms. Fite’s dismissal, Judge Kelley would have had nothing to say about it, realizing to cross the Memphis Boss would imperil her own continued tenure at the court. Camille Kelley was too experienced and too shrewd to think she could countermand an order from Boss Crump.

Look for the second in this series next week.

Camille Kelley: ‘The Little Irish Judge’ added by design on September 22, 2013
View all posts by design →