CASA makes a difference in the lives of at-risk youth

By design on July 21, 2013Comments Off on CASA makes a difference in the lives of at-risk youth 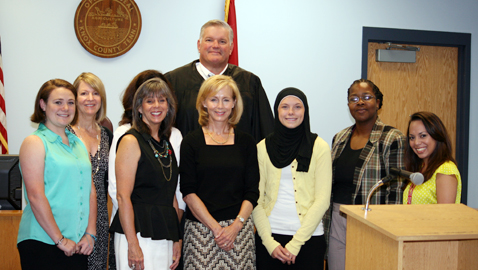 “Every day we rely on the judgment and expertise of our CASA volunteers as they serve as our eyes and ears inside the home,” said Knox County Juvenile Court Judge Tim Irwin.

CASA of East Tennessee is a private, independent, not-for-profit organization located in Knox County which serves local children who come under the protection of juvenile court due to allegations of abuse or neglect within the home. CASA stands for Court Appointed Special Advocate. Locally, the group works hand-in-hand with the Knox Juvenile Court system by training community volunteers to advocate for the needs and best interest of these children.

“The goal of our intervention is to represent the best interests of the child and shorten their stay in a foster home,” volunteer coordinator, Summer Colbert, told The Focus.

The program has also proven to be effective in breaking the cycle between abused or neglected children who are statistically at a greater risk to become violent offenders. The organization recently welcomed its latest class of community volunteers who have been sworn in to help represent local children in need.

CASA volunteers’ duties consist of getting to know the children and their living conditions. This includes making home visits and talking to a variety of people involved in the children’s lives (e.g., parents, teachers, social workers). From their observations, volunteers are able to accurately inform judges and others who may make important decisions regarding the welfare of the child. Furthermore, volunteers make recommendations on how to serve the children’s best interests. The ultimate goal of the child’s representative is to advocate for a safe, permanent, and loving home for the child.

“Our advocates ensure that the children have the support services they need and do not fall through the cracks in the social services system,” Colbert added.

According to CASA, in 1977, a Seattle family court judge expressed his concern over the lack of attention given to children involved in abuse and neglect cases. He believed that a more individualized approach would lead to a more accurate picture of the child’s living situation. As a result, a judge could tailor his decision to the child’s best interest. Ideas were proposed, and eventually, programs were created where volunteers could act as child advocates. In response to these programs, the National CASA Association was created in 1982 with its mission to recruit, train and support volunteers representing children in the court system.

The agency started in 1987 in Knox County and relies on both state and county funding. They are also a United Way partner agency.  Last year, CASA of East Tennessee served almost 300 children in Knox County with over 25 active volunteer advocates. Their services are free to every child they serve.

Those interested in becoming a volunteer may contact Summer Colbert, Volunteer Coordinator, CASA of East Tennessee, Inc. either by phone at 865-329-3399 or by email at summer.colbert@casaofeasttn.org.

CASA makes a difference in the lives of at-risk youth added by design on July 21, 2013
View all posts by design →