By design on May 18, 2014Comments Off on Exchange students prepare to return home 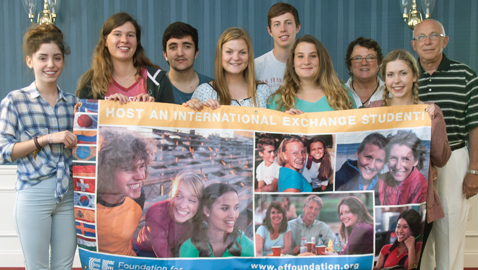 Hosting an international student can be a very rewarding experience, both for the students and the host families. Often, friendships are made for life and students and host parents often view each other as second families.

For the past school year, nine students from European countries have studied in Knoxville area high schools. Students from as far away as Norway have participated in the program as part of the Education First Foundation.

The Education First Foundation (EFF) is the leader in high school exchange, bringing over 55,000 international students to America since 1979. It is funded by the U.S. Department of State.

Lendelle and Sue Clark serve as volunteer International Exchange Coordinators for EFF and hosted the exchange students at a Re-Entry Orientation meeting on May 10. Students prepared a homemade meal to share with each other and their host families before students and host families broke off into meetings. During the student meeting, Lendelle covered important items students needed to wrap up before heading back to their home countries, such as insurance, bank accounts, phone bills, etc.

Sue talked with the host parents about their thoughts and feelings as the students they hosted were getting near the end of the program and preparing to return home. Parents also discussed the differences in culture they had come to find out between the U.S. and the students’ countries. Students also shared with each other what they will miss about their experiences here and how they were coping with returning home.

Getting the word out to people about the program is one of the toughest challenges. “The toughest part is people willing to take a stranger,” Sue Clark said. Host parents are screened as well as the students. The best way to find host families to host the students, Lendelle said, is through word of mouth. They have also handed out flyers advertising the program in businesses.

Costs to the international students’ parents range from $10,000-12,000. “Students come with their own insurance and spending money,” Sue said. American families volunteer their time and houses to host the students.

The most rewarding aspect of the program, Sue said, is “watching the students grow and change, mature.” One other host parent, Ray Thompson, said that he has made friends for life from the program and that the international students view host parents as a second family. “You can’t even put a price on that. I’ve made five trips to Europe. I have a place to stay. They (international students and their parents) take you to places out of the way.”

The Clarks hosted two students over the past school year. Guillermina (Mini) Palay Barca is from Barcelona, Spain, and Megan Baldissara is from Milan, Italy. Mini is a junior and Megan a senior at West High School. The students do not receive academic credit for their studies and will have to make up their year of study when they go back to their countries.

Megan described her experience as fun, and Mini had the attitude to “go for it.” Both of them said the biggest difference between America and their countries is the food and the transportation. Mini said, “Back in Spain I walked everywhere. Here you need a car to get somewhere. You’re dependant on people for a ride.” However, she does have a scooter in Spain.

Mini has also noticed the differences in schooling. “I had 14 subjects back in Spain. Here I have eight. Here there is multiple choice (on tests); back there you have to write many essays.”

This has been Mini’s first time in the states, and she has been to Washington D.C., North and South Carolina, Georgia, Florida, Miami, and New York City. “I’m in love with New York,” she said. Megan loved California and Florida.

Both played basketball for West, but Megan suffered an ACL injury one week before the season began. She said she began running again one week ago. Mini loved going to UT football games, attending five of them last fall.

Both students will take back life lessons they have learned here with them to their countries. “I’ll be more open-minded,” Mini said. Her advice for international students thinking about a school year in America: “Go for it. Don’t think about what it will be like. Come here and experience it and enjoy it. I’ve had the best year of my life so far. I don’t want to leave.”

“It’s one of the most enjoyable things I’ve ever done,” Sue Clark said, talking about hosting international students.

For more information on how you can become a host for an international exchange student please visit www.effoundation.org or contact Lendelle and Sue Clark at ef_lendelleclark@yahoo.com or call (865) 385-4649.

Exchange students prepare to return home added by design on May 18, 2014
View all posts by design →