By design on January 24, 2021Comments Off on Fala – FDR’s Beloved Scottish Terrier 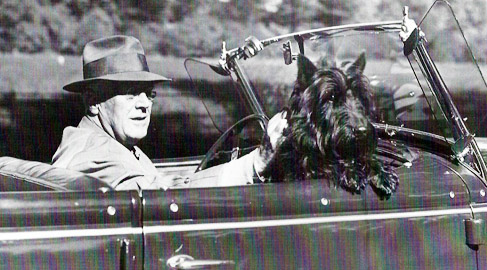 The lives of presidents and kings are usually equally celebrated or condemned, yet Franklin Delano Roosevelt remains one of the most iconic of American presidents to this day.  During his lifetime as president, just about every aspect of Roosevelt’s life was avidly followed by millions of people and in 1940, a new addition to FDR’s family was to become almost equally famous.

It was 1940 when Roosevelt’s cousin and frequent companion, Daisy Suckley, gifted the president with a Scottish terrier puppy as an early Christmas gift.  Many of Roosevelt’s friends and relatives considered FDR to be quite lonely in the White House despite his usual sunny nature and the constant stream of visitors.  Miss Suckley believed the puppy would give her cousin much happiness and comfort and the little Scottish terrier soon became the president’s constant companion of choice.

Born April 7, 1940 and originally named “Big Boy,” the little Scottie was carefully trained by Miss Suckley and he had an entire repertoire of tricks he could perform.  President Roosevelt received his new puppy in November of 1940 and promptly renamed the dog.   The Scottie was christened “Murray the Outlaw of Falahill” or “Fala” to his friends and family.

Fala pretty much had the run of the White House and slept in the president’s bedroom each night.  The Scottie soon wasn’t feeling well and was sent to a veterinary hospital by a distressed Roosevelt and it was discovered Fala had been visiting the White House kitchens where he was receiving all too numerous morsels of food.  Fala’s digestive system suffered as a result and an unhappy President Roosevelt issued a stern order that only he was allowed to feed the Scottie.

Unable to walk without the aid of heavy braces, FDR usually enjoyed his breakfast in bed and the presidential breakfast was almost always bacon and eggs, part of which was carefully portioned out for Fala, who was the president’s most frequent breakfast guest.

Fala soon captured the popular imagination and remains perhaps the most famous presidential pet in our country’s history.  The news media frequently reported on the Scottie’s doings and Fala became a symbol in his own right.

Metro Goldwyn Mayer, perhaps the most prestigious movie studio in Hollywood, known as the home of such screen legends as Clark Gable and Greta Garbo, hurried to Washington, D. C. and filmed a “short” of the little Scottish terrier.  FDR, while holding a bowl of Fala’s food, demonstrated Fala’s ability to perform all his tricks for amused cameramen.  The little Scottie could even curl his lips to resemble a smile at FDR’s command.  Millions of Americans happily watched the movie short in theatres across the country.  It was so popular, MGM made yet another Fala short.  Fala also became the subject of a bestselling book, which is still in print today.

Roosevelt’s wife and First Lady, Eleanor, far more austere than the president, considered Fala to be something of a spoiled little beast, and more than one argument erupted between the two over Fala.  The president was not above reviewing the folks proposed to accompany him on trips and scratching through Eleanor’s name and writing in Fala’s.

Fala was the witness to much history first hand; when President Roosevelt met with British Prime Minister Winston Churchill on a battleship in Newfoundland, Fala can be spotted sitting in front of his master and Churchill before an assembly singing “Onward Christian Soldiers.” A medallion of Fala was struck and used to raise funds for British war relief.  Fala himself was an honorary private in the United States Army, as he apparently had contributed $1 for every day of the war from his evidently generous allowance.

American soldiers used Fala’s name during the Battle of the Bulge to help determine whether someone was friendly or an enemy, not expecting Germans to recognize the presidential pet.

Franklin D. Roosevelt, once the Assistant Secretary of the U. S. Navy, loved traveling by ship, and the president rarely ever left Fala behind.  It was on board a battleship when Roosevelt viewed his little dog with alarm, noting the Scottie’s coat seemed to be falling out.  The president demanded someone follow his Scottie and discovered admiring sailors were clipping locks of Fala’s hair as souvenirs.  An outraged FDR issued yet again another edict to protect the dignity of his pet.

Fala got his revenge upon some sailors who, attempting to escape the oppressive heat, were lying on the ship’s deck beside one another barefooted.  Fala hurried down the row of sailors, licking and tickling their feet and causing quite a commotion.  Fala also amused the president by noticing fish caught by FDR and his party flopped about the deck wildly and the little Scottie was soon doing the same, causing much laughter.

Disgruntled Secret Service agents gave Fala the dubious nickname of “The Informer”, as the Scottie had to be walked and he was so easily recognizable, that it was a certain confirmation that President Roosevelt was himself nearby.

Kings, prime ministers, Congressmen and senators were often left hungry while President Roosevelt fed Fala from his own hand.  Only after Fala had eaten did the president’s guests get to eat their own food.

Fala was disappointed by his master upon rare occasion.  One such occasion was when Fala leaped into FDR’s limousine, which was carrying the president to an inauguration ceremony.  The top-hatted Roosevelt lifted up a disheartened Fala and whispered, “Not this time, old man.”

Fala had to be about the best traveled dog in the country and whether FDR was embarking on yet another trip by ship or his plane, the Sacred Cow, or his personal railroad car, the Ferdinand Magellan, Fala was usually somewhere nearby.  When President Roosevelt went to Mexico to visit Mexican President Camacho, Fala went along South of the border down Mexico way.

The subject of political cartoons, Fala was once even portrayed by another Scottie in the movie Princess O’Rourke.

Fala’s popularity became such that he required a secretary to answer his mail, which ran into the thousands of letters.

Franklin D. Roosevelt, one of the shrewdest politicians ever to occupy the White House, once used his famous Scottie to pound the hell out of his political opponents during one of his reelection campaigns.  The “Fala Speech” remains one of the most famous of FDR’s many memorable addresses.  Carried over national radio as Roosevelt addressed a gathering of labor leaders, FDR indignantly informed his audience that the Republicans were accusing him of having left Fala stranded on an island in the Aleutians and had sent a ship to retrieve him at a cost of millions to the taxpayers.

“These Republican leaders have not been content with attacks on me, or my wife, or on my sons.  No, not content with that, they now include my little dog, Fala.  Well, of course I don’t resent attacks, and my family don’t resent attacks, but Fala does resent them.  You know Fala is Scotch, and being a Scottie, as soon as he learned that the Republican fiction writers in Congress and out had concocted a story that I had left him behind on an Aleutian island and had sent a destroyer back to find him – – – at a cost to the taxpayers of two or three, or eight or twenty million dollars – – – his Scotch soul was furious.  He has not been the same dog since.  I am accustomed to hearing malicious falsehoods about myself, but I think I have a right to resent, to object to libelous statements about my dog.”

As FDR spoke, his audience was convulsed with laughter and he received a tumultuous ovation when he concluded his remarks.  A clever speech, it had the desired effect and once again Franklin Roosevelt routed his Republican opposition.

The only other political speech in our country’s history about a pet that could even remotely compare to FDR’s “Fala” talk is Richard Nixon’s “Checkers” speech.

Fala was with FDR when the president died at his retreat in Warm Springs, Georgia.  Miss Suckley was one of those present when FDR passed away and Fala seemed to recognize that his master was gone.  The little Scottie had been sleeping in a corner and suddenly jumped up and ran to the screen door.  Using his head as a battering ram, Fala broke through the screen and darted to the top of a hill, barking and howling, where he remained alone.  No one who witnessed the incident ever forgot it.

FDR did not leave his beloved little Scottie to his wife Eleanor; he expressly stated he wished to return Fala to Daisy Suckley.  The former First Lady had to endure the embarrassment of sending her son James to ask Miss Suckley if she could keep the Scottish terrier.  Miss Suckley agreed and Fala remained with Eleanor Roosevelt for the last seven years of his life.

Mrs. Roosevelt was the author of a famous and successful column, “My Day”, before and after the president’s death.  Fala was often a topic of Mrs. Roosevelt’s column and she readily admitted, “It was Fala, my husband’s little dog, who never really adjusted.”

Mrs. Roosevelt noted Fala always became quite alert whenever the little Scot heard sirens, once a sign that FDR himself was due to arrive.  Fala stationed himself in a doorway in Mrs. Roosevelt’s cottage where he could observe more than one door in the event he might dash out for yet another adventure.

Fala had quite nearly been killed by a bullmastiff just months after FDR had died. The dog belonged to Elliott Roosevelt, the late president’s son.  Evidently the enormous mastiff only let go of Fala after someone had the presence of mind to beat him around the head with a rock.  The mastiff badly mauled the little Scottie, who hovered precariously between life and death for several days.  Mrs. Roosevelt was horrified and one can only imagine what Franklin Roosevelt’s reaction might have been.

Fortunately, Fala recovered but the mastiff was put down.

Fala sired puppies and one of his grandsons was a favorite companion of Mrs. Roosevelt, whom he accompanied on her ramblings at her Val-Kill cottage in New York.

Not surprisingly, there is quite a display of memorabilia relating to Fala at the Franklin D. Roosevelt Library at Hyde Park.

The most famous of presidential pets died on April 5, 1952, just days before what would have been his twelfth birthday.  Eleanor Roosevelt, so composed and dignified when President Roosevelt died, was reportedly shattered by the loss of the little Scottish terrier whom her husband had loved so well.

Fala was buried at the feet of his master at the estate in Hyde Park, where he sleeps to this day, reunited with the person Fala himself loved best.