By design on June 10, 2012Comments Off on Five Questions with Overtone 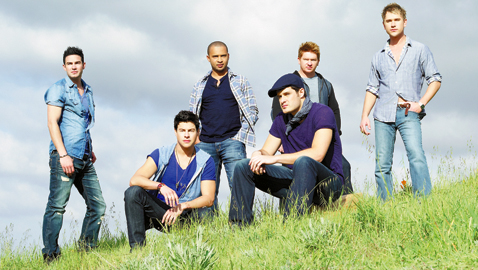 1. Your band Overtone has been on “Ellen,” toured with Corrine Bailey Rae, opened twice for One Republic, is currently playing on Satellite radio and now is on a major hit reality TV show involving Dina Eastwood. Coming so far as a band professionally, do you believe the band has “made it” in the industry? If not, what goals do you believe you need to achieve to consider yourself a success?

ERNIE: As a band we have come a long way. We started in 2006 and we felt at that time that if we get a chance to perform on the main stage at ‘Innibos’ (a South African music festival), we can consider ourselves successful. We never did get a chance to perform on that stage, so we skipped it right into the American entertainment industry. “The success bar” as we call it, gets raised very often. But after all the things we did and achieved as a band I still don’t think we’ve “made it” yet. To consider ourselves successful we would like a second season of Mrs. Eastwood & Company, a number one hit song and an album sale of at least two million.

2. The band “Overtone” is currently featured on the hit reality TV show “Mrs. Eastwood & Company.” Unlike “American Idol” or the current clutter of other singing shows, your band is in a unique situation. The band is receiving massive exposure via television but does not have to deal with TV show competition drawbacks. How has this approach helped you and did the band ever consider trying out for a strictly music show when they arrived in the United States?

RIAAN: Living in the US gave Overtone a bit more insight to the acappella genre. We were exposed to many more bands that do what we do. As a band we knew there would be tough competition but we had one strong advantage, Being foreign and having Dina Eastwood support us. In a way we are different than other vocal groups out there. We are organically put together and arrange our harmonies in a unique way. We thought of competing on the show “The Sing-off’s” but we had immigration troubles at the time. We were also like a fish out of water, not knowing where to go, what to do in this new music world. With Dina, our first time manager, we had a guide. Dina had a dream of us doing a reality show because of all the crazy experiences we’ve had. The dream came true.

I think doing multiple music talent shows give great experience and exposure, but can sometimes be a hit and miss and discourages the performer. Overtone had to come up with a way to not to get discouraged by any obstacles and to have a prolonged success.

3. Musical artists expose their thoughts, passion, and lives through their music. As a band that is exposing those same elements through television, does that help or hurt the music writing process?

RIAAN: The writing process has always been difficult. It is not always easy revealing one’s deepest emotions to the rest of the world. The TV show forced us to be real with our emotions and taught us to not be as shy at letting it out there. Another setback is time. Being on a TV show makes for a lot more on the Overtone schedule. We try and work fast as we can but unfortunately to be creative takes time.

ERNIE: Dina is our angel. She is an amazing person with a big and caring heart. She is much more than just a manager to us. She’s like our big sister and mom. Dina wasn’t in the music industry at all before she brought Overtone over to America, so she had to learn it at the same time as we did. It wasn’t easy for her to get us where we are today. It is an advantage to have Dina in our corner because she knows what it takes to be successful in life so she is always pushing us to get better at what we do. Her contacts do help us a lot and the fact that she and her family name is backing us as a band will make people listen and look at us for a second time. On the other side, people’s expectations are much higher and we get thrown into the deep water constantly. The pressure is so much higher because we are working with veterans in the TV and music industry so we always have to be on top of our game.

5. Take us through a typical daily schedule for the band “Overtone.”

RIAAN: A typical day for Overtone is getting up and checking e-mail from Dina. She constantly sends us mail saying “write write write.” Owning your own song is the best thing one can do as an artist. We are a self-sufficient band and we try to do everything ourselves. We write our own music, do our own videos, rehearse, recording, producing, planning, setting up meetings, doing gigs. It’s not easy trying to do everything that a record label would provide, but it does keep you on your toes. We are six guys in the band and try to spread the workload. The day in the life of Overtone is hectic but we do it all to follow a dream.

Five Questions with Overtone added by design on June 10, 2012
View all posts by design →