By design on November 3, 2013Comments Off on Fulton swats Hornets 69-0 in matchup of unbeatens 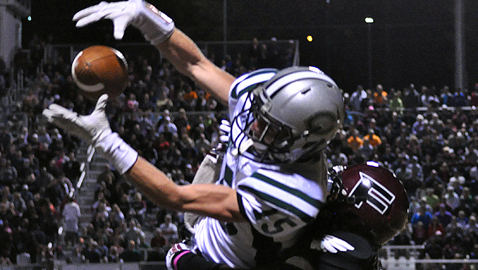 Previously unbeaten Carter found that out Friday night, losing to the homestanding Falcons 69-0 before an overflow crowd at Bob Black Field.

With its 12th straight win over the Hornets, Fulton capped a dominating 10-0 regular season and wrapped up the District 3-AA championship on Senior Night. The Falcons, defending Class 4A champs, now have their sights set on a fifth state title as the playoffs open this week.

Carter (9-1) will try to regain its swagger after what was a staggering setback.

The Hornets did manage to sting Fulton early.

Jonathan Freeman hit Andrew Cook in the flat on Carter’s opening play from scrimmage for a gain of 15, but what really got Carter fans roaring was a defensive frenzy that cut down Fulton star running back Daryl Rollins-Davis for three straight losses in the Falcons’ opening possession.

Another pass to Cook, a big run by Toy’Shaun Winton and a defensive holding foul by Fulton had Carter threatening on its second possession with a second-and-six at the Falcons’ 30-yard line.

But the Hornets couldn’t get any closer, and Rollins-Davis made a blitzing Carter defense pay moments later.

Just as Hornet defenders came cheating up closer, Rollins-Davis took a handoff and darted by them near the line of scrimmage. There was nobody else left to defend, allowing him to sprint 59 yards for the go-ahead touchdown. Josh Coleman kicked his first extra point for a 7-0 lead with 7:11 showing in the first quarter.

The stinger had been yanked out.

Rollins-Davis clocked out at halftime with four touchdowns and 178 yards on 10 carries. It was his 15th straight game reaching the 100-yard mark and he also moved into second place on Fulton’s all-time rushing list behind Dennis Rogan.

“Carter’s got a good football team,” he said. “They’ve got some good athletes. It took us a few plays to scheme them a little bit, but once we did and hit a couple of long ones to jump to the lead, our guys executed from there on and had a great night.”

Heath Woods, Carter coach, said his team stayed with the regular defensive game plan that got it to 9-0.

“We’ve been a sack of marbles hitting the ground all season long, sending people and covering up man,” said Woods. “They out run us carrying the ball up the gut and that hurt us. They have a big ole huge line and we’ve been undersized all year long. We decided to do what we do best, and not make a whole lot of changes.”

Carter senior safety Tucker Greene said, “Sometimes we blitzed and they just ran it where we weren’t.”

Freeman, Carter’s junior quarterback, was disappointed the Hornets did not play up to their potential. “Fulton’s a really, really good football team, one of the best that’s been in this area and state in a long time,” he said. “But the score doesn’t reflect how good we are. We definitely can play a better game than what happened. That’s why I’m disappointed. I know we’re better than how this game ended.”

Freeman, who came into the game as one of the top passing quarterbacks in the area, managed to complete only 8 of 40 passes or 133 yards, with three interceptions.

The game got out of hand quickly. The Falcons built a 35-0 command by the end of the first period and had reached their scoring average when fullback Sidney Jackson’s 40-yard run gave them a 62-0 margin with 4:23 to go in the first half.

Fulton scored five times on an opening play of a possession and four times on a second play. Its longest drive was a 94-yarder in five plays.

Carter’s strategy of punting the ball out of bounds to prevent big plays by Fulton’s speedy returners resulted in Hank Black averaging 17.4 yards on six punts, including a 6-yarder and another that went out of play four yards behind the line of scrimmage.

Two missed tackles near the line of scrimmage allowed Rollins-Davis to run 29 yards for his second touchdown.

Domonique Williams returned a 26-yard Black punt 45 yards to the Carter 14 and Smith scored on a naked bootleg on first down to make it 21-0 with 3:00 left in the first quarter.

Carter was penalized for back-to-back encroachment fouls on its next possession and Woods was flagged for unsportsmanlike conduct, making it first-and-25 from its 5-yard line.

A 41-yard punt by Black got the Hornets out of the hole, but Hawkins, on an apparent misalignment by the Carter defense, was in the wide open on a 46-yard TD run.

Things continued to get worse for the Hornets. Ryjion Tate recovered a fumble by Winton and Smith hit Roper with a 23-yard scoring pass on first down. Roper was greeted with a body bump from Coach Black as he came off the field.

A 30-yard pass play from Freeman to Charles Mitchell gave Carter first-and-goal at the Fulton 5 early in the second quarter, but the Hornets didn’t finish.

Big D.J. Campbell rumbled 45 yards to the Carter 45. It took three Hornet defenders to bring him down. Rollins-Davis, running through a massive hole, went 48 yards to complete the 94-yard march.

After a 17-yard Hornet punt, the Falcons tallied again on a first-down play, this time with Smith hitting Hawkins on a fly pattern down the sideline that covered 45 yards.

Black’s negative punt set up Fulton at the Carter 39. Rollins-Davis scored his fourth TD on a 29-yard run, making it 55-0 with 5:32 remaining in the half.

With the mercy rule in effect and the clock running, Fulton played its second units after intermission. Sophomore De’Ontay Tate raced 55 yards for the game’s final TD with 10:10 showing in the third quarter.

STIRRING PERFORMANCE: The Carter High Marching Hornet Band’s halftime show was entitled “The Seventh Day of December” and included selections depicting the night of December 7, 1941: the Attack on Pearl Harbor. The creative production by the internationally renown band drew a standing ovation.

Fulton swats Hornets 69-0 in matchup of unbeatens added by design on November 3, 2013
View all posts by design →