By design on July 7, 2013Comments Off on Governor Prentice Cooper, Chapter II 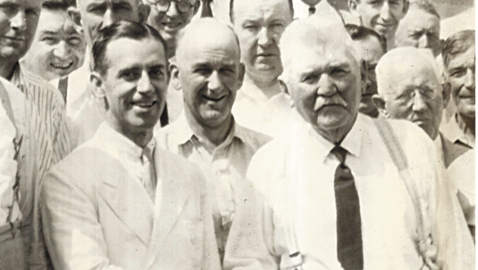 By the fall of 1937, E. H. Crump, leader of the Shelby County political machine, was openly fighting Governor Gordon Browning. After having supported Browning for governor in 1936, Senator Kenneth D. McKellar’s prediction that Crump could not trust Browning had proved to be true. Following a meeting in the Memphis Boss’s business office, Browning and Crump irrevocably parted ways. Knowing his ability to win an election in 1938 was imperiled, Browning returned to the State Capitol determined to destroy the power of the Shelby County machine.

Governor Browning proposed a county-unit plan much like the national Electoral College, assigning a certain number of votes to each county in Tennessee. It had the practical effect of negating the huge majorities Crump could conjure inside his Shelby County domain for his favored candidates. It would reduce Shelby County’s totals from approximately 25% of the total vote to about 13%.

While Browning was successful in having the legislature approve his “reforms”, the county-unit plan was struck down by a court as unconstitutional. With Browning’s open declaration of war upon Crump and the Shelby County machine, the Memphis Boss fought back.

The Browning assault on Crump had one practical effect; it brought Senator Kenneth D. McKellar and E. H. Crump more closely together than ever before. McKellar disliked Browning intensely and had long warned the Memphis Boss of Browning’s character and penchant for treachery. Crump had pleaded with the senator for help when Governor Browning had proposed his election reforms and McKellar had left Washington to appear in person before the Tennessee General Assembly. Both Senator McKellar and Boss Crump decided to back candidates against Browning and the governor’s appointee to the United States Senate, George L. Berry.

Bedford County State Senator Prentice Cooper, virtually unknown outside his home area, was a declared candidate for the gubernatorial nomination. Memphis Congressman Walter Chandler also announced his own candidacy, but apparently he had not consulted Senator McKellar, who was decidedly lukewarm about the idea. Neither was Mr. Crump convinced Chandler should run; the Memphis Boss knew Governor Browning would make an issue of him personally, as well as the Shelby County machine in the coming primary election. Crump felt a candidate from his own domain would make a more inviting target and less of a draw statewide. Congressman Chandler soon announced he would seek reelection to Congress instead of the governorship.

Senator McKellar knew Prentice Cooper’s father, William Prentice Cooper, quite well and soon came to like the younger Cooper. McKellar concluded Cooper might make a strong candidate against Gordon Browning and Cooper agreed to run a “coalition” campaign for the governorship. Crump, following McKellar’s lead, endorsed Prentice Cooper without ever having laid eyes on him. The Memphis Boss went to the trouble of formulating a platform for the gubernatorial candidate, which Cooper discarded, although he politely acknowledged Crump’s efforts and thanked him.

Any number of prospective candidates angled for preference for the governorship, but especially for the U. S. Senate seat held by George L. Berry. Senator McKellar received a steady procession of possible senatorial candidates before finally settling on Arthur T. “Tom” Stewart of Winchester. Stewart was the District Attorney for several counties surrounding his home county of Franklin. Stewart had been the official prosecutor at the infamous Scopes “Monkey Trial”.

Prentice Cooper journeyed to Winchester when Tom Stewart kicked off his campaign for the Democratic nomination for the United States Senate. A huge crowd of home folks was on hand as Tom Stewart announced his candidacy officially and declared himself for President Franklin Delano Roosevelt unconditionally. Stewart chided incumbent Senator George L. Berry who had been critical of the President’s “pump priming” policy. Stewart noted Berry had been all for such a program before he had been appointed to the Senate. Tom Stewart told his hometown audience he would support the President, strongly encourage further rural electrification, and back the Tennessee Valley program. Stewart also said he would do everything he could to help Tennessee’s farmers, which would remain one of his special interests throughout his senatorial career.

Governor Browning knew he was in trouble and campaigned furiously all across the State of Tennessee. Browning’s bid to destroy the Memphis machine had not been well received by the state media. Newspapers all across Tennessee had uniformly denounced Browning’s tactics, even when they opposed Crump and the Shelby County machine. Browning attempted to campaign on the issue of dictatorship, claiming E. H. Crump intended to rule all of Tennessee. Considering his own tactics in trying to destroy Crump’s power, which many believed to be an abuse of his own power, it was an argument that did not resonate with many Tennesseans.

Unlike his ticket-mate Tom Stewart, Prentice Cooper was not an especially good speaker. The diminutive Cooper did possess a fiery temper when angered, although he was cordial enough to voters as he traveled across the state. The coalition ticket maintained a statewide headquarters inside the Hermitage Hotel in Nashville; John W. Harton, the Mayor of Tullahoma, Tennessee, served as the campaign manager for the coalition ticket, which was well funded and even better organized.

Both the Browning and Berry campaigns were headquartered in Nashville’s old Andrew Jackson Hotel. Browning’s campaign manager, James Cummings of Woodbury, Tennessee, was careful to note the governor’s campaign was not connected to that of any other candidate, a bid to disassociate himself from the troubled campaign of his senatorial appointee, George L. Berry.

Crump whipped up enthusiasm for the ticket inside Shelby County while Senator McKellar kept a watchful eye on the ticket’s progress from Washington. Having served in statewide office for more than twenty years, McKellar’s extensive knowledge of politics and the various individuals who were important in each of Tennessee’s cities and counties was invaluable to the coalition campaign.

Mr. Crump amused himself by purchasing huge ads in most of Tennessee’s leading newspapers, denouncing Governor Browning in the colorful language the Memphis Boss reserved for his political opponents. Crump noted, “In a certain art gallery in France, there are twenty-six pictures of Judas Iscariot. None of them is alike, but they all resemble Gordon Browning.”

The governor heaped his own scorn and ridicule on the Memphis Boss, making Crump the principle issue in his own reelection campaign. As the primary election approached, Browning’s speeches seemed to get more hysterical and shrill. Prentice Cooper, far less colorful than the Memphis Boss and not the orator Gordon Browning was, stuck to his set speech and business-like approach to meeting voters.

The coalition ticket of Prentice Cooper for governor, Tom Stewart for U. S. senator, and W. D. Hudson for Utilities Commissioner reported spending less than $10,000 each, which was keeping with Tennessee state law at the time. The campaign reported $100 contributions from Senator K. D. McKellar and former Governor Hill McAlister. The actual expenditures by the coalition ticket were likely far more than what was officially reported. None of the campaigns that year appeared to lack for money, save perhaps that of Congressman J. Ridley Mitchell who was running for the United States Senate against Tom Stewart and Senator George L. Berry.

Cooper and Tom Stewart appeared in Knoxville on July 14, speaking to a large audience. Newspapers noted the large number of supporters of Senator K. D. McKellar in the crowd. Both Cooper and Stewart took a few shots at Governor Browning and Tom Stewart predicted victory. Stewart said he believed both he and Prentice Cooper would win by more than 50,000 votes and win another 50,000 or 70,000 “honest” votes in Shelby County. Stewart pointed out the votes in Shelby County would certainly be “honest” votes as Gordon Browning had declared them to be so when he had won Shelby County by some 55,000 votes two years earlier.

Gordon Browning, having won the nomination for governor in 1936 by the largest majority ever given to a gubernatorial aspirant in Tennessee’s history, lost badly to Prentice Cooper in 1938.

Republicans in Tennessee nominated Howard Baker to oppose Cooper in the general election. Baker, the father of future U. S. Senator Howard H. Baker, Jr., was no threat as Republicans would not be competitive in statewide elections for almost another thirty years.

Prentice Cooper was elected governor of Tennessee on November 8, 1938.

The bachelor governor moved into the governor’s mansion with his mother serving as the hostess for official functions. Governor Cooper immediately set about firing those appointees loyal to Gordon Browning, causing some newspapers to complain that Cooper was going too far in cleansing the state payrolls. A few of the newspapers also noted many of the Browning people had been replaced by those whose primary allegiance was to Senator K. D. McKellar.

Governor Cooper also took out his red pencil and began slashing funding for state departments and agencies in an attempt to bring the budget under control. Prentice Cooper would make his mark as an economy-minded governor.