By design on September 20, 2015Comments Off on The Great Smoky Mountain Park Feud: Senator K. D. McKellar and the National Park Service 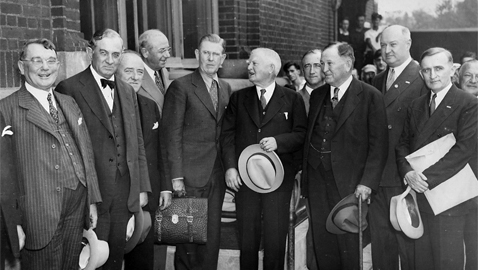 The sharp tongued Ickes was legendary for being irascible, acerbic and was a self-described “curmudgeon.” Ickes was well able to handle his part of any argument or dispute, although he was remarkably petulant for an accomplished feudist. It was something of a joke in the Roosevelt administration how often Ickes would offer up his resignation whenever his feelings were hurt, or he wasn’t getting his way. Of course Ickes never believed FDR would actually accept his resignation and was always well prepared to be persuaded by Roosevelt that the president just couldn’t do without him. When Ickes tried the same thing with Harry S. Truman, the little man from Missouri accepted Ickes’ resignation with alacrity, shocking “Honest Harold”.

The formidable Ickes had few peers in use of the art of sarcasm and feuding, but he was to meet his match in Senator K. D. McKellar.

There had long been a rivalry between Tennessee and North Carolina, most especially between Knoxville and Asheville. In 1934, when a hearing was instigated by the Interior Department in Asheville, Senator McKellar fired off a telegram to Secretary Ickes demanding to know if there would be a similar hearing in Knoxville so that Tennesseans could be heard.

McKellar also discovered there was to be a scenic highway built through the Blue Ridge Mountains of the Shenandoah National Park and immediately saw similar potential for Tennessee. Senator McKellar insisted upon the same treatment for the Great Smoky Mountains National Park. The Park Service resisted McKellar’s demand and one unfortunate bureaucrat went to see the senator.

Horace Albright was the Director of the National Park Service and he visited McKellar’s Senate office and promptly told the Tennessean due to the rugged topography of the Great Smoky Mountains, it would be impossible to build a scenic route similar to that passing through the Blue Ridge Mountains. The Director also shared his personal opinion there should never be such a road built, as much of the Great Smoky Mountains National Park should be “road-less wilderness.” Director Albright added, for good measure, his further opinion that the two parks should complement one another and that it would be a mistake to attempt to make them identical.

Director Albright seemed astonished when, after lecturing McKellar on his own vision for the Great Smoky Mountains National Park, the senator’s famous temper erupted like Mount Vesuvius.

The senator apparently not only questioned Albright’s intelligence, but his parentage as well. McKellar thundered how dare Albright attempt to stand in the way of a project for the welfare and happiness of the people of Tennessee. McKellar growled that he should probably punch the Director in the nose. Senator McKellar began to mutter darkly that Albright must be a Republican, especially as he had served under President Hoover. Too surprised to protest under the torrent of angry words from the senator, Albright finally tried to explain further, but was told to leave in no uncertain terms.

It had never occurred to Horace Albright one did not lecture K. D. McKellar on Tennessee matters, especially when one was not a Tennessean. He waited several days and tried to get an appointment with Senator McKellar again, but McKellar would not see him. In desperation, Albright finally located a mutual friend and asked the friend to telephone the senator for an appointment. It was a smart move and Senator McKellar grudgingly consented to see Albright and his friend. McKellar was still so angry and agitated by Albright their mutual friend found it necessary to grasp the senator’s shoulder and hold him in place, while insisting he listen as Albright was speaking.

With the senator restrained, Albright bravely said, “I will not, under any circumstance, go ahead with the road you demand. Furthermore, Senator McKellar, I resent your personal insults.”

At that point, the feud was on.

One of the more powerful members of the United States Senate and ranking member of the Senate Appropriations Committee, McKellar was relentless in his feuds and equally determined to do all he could for Tennessee and her people. Senator McKellar saw it as his personal responsibility to bring as much as he could to Tennessee and nurture every project that came to his state. McKellar was one of Washington’s most celebrated feudists and his battle with the National Park Service was just beginning.

J. Ross Eakin had been working for the National park Service for some eighteen years by 1939 and had been superintendent of the Grand Canyon and National Glacier Parks before coming to Tennessee and the Great Smoky Mountains National Park. McKellar did like the idea of the Park superintendent coming from outside Tennessee. The notion Eakin was a Republican and favored Republicans in his hiring practices made the situation even more intolerable.

Eakin placidly said he was nonpolitical, choosing his employees from the Civil Service register and was himself a Civil Service employee. To diffuse the charge he was a Republican, Eakin claimed he had voted for Franklin Roosevelt in 1936. Senator McKellar was supplied with a ballot from Sevier County friends who claimed it was the ballot of J. Ross Eakin. The ballot handed to Eakin had deliberately been smeared with ink and that particular ballot was marked not for FDR, but for Roosevelt’s opponent, Republican Alf Landon.

McKellar was less appalled by the actions of the Sevier County election officials than he was triumphant over having confirmed his suspicions Eakin was indeed a Republican and a liar to boot. Senator McKellar pressed for an investigation of Eakin and his office by the United States Senate, knowing full well if such a special committee was formed, he would likely chair that same committee and have a great deal to say about the composition of its membership. Luckily for Eakin, McKellar was thwarted in his efforts to form a special investigative committee.

Secretary of the Interior Harold Ickes shrewdly helped to head off a Senate investigation by having his own department investigate McKellar’s charges. The Secretary was delighted with the resulting report, which exonerated Eakin. Ickes was not only happy about the report, but was more than a little self-satisfied in having outfoxed the wily McKellar.

Ickes likely believed that would be the end of the matter, but if so, he badly underestimated K. D. McKellar.

The Civilian Conservation Corp (CCC) was but one of the myriad of “alphabet” agencies that were created under Franklin Roosevelt’s New Deal. The CCC put millions of otherwise unemployed young men to work all across the country. There were some sixteen or seventeen CCC camps located near or inside the Great Smoky Mountains National Park, allowing projects to be accelerated to completion. The young men of the CCC built some 500 miles of horseback riding and hiking trails, fire towers, fire control roads, and the like. Senator McKellar was again hearing from friends in Tennessee that Superintendent Eakin had misused CCC funds.

Once again McKellar pressed for an investigation and once again another report was issued holding Eakin blameless. Still, McKellar persisted.

The Sentinel, noting McKellar’s objections to Eakin from having come out of state, jeered, “Who are you to talk? Weren’t you born in Alabama?”

“I wouldn’t remove a man except for cause and his political affiliation is not a cause. Eakin has done a good job,” Ickes said.

Senator McKellar was not impressed.

McKellar introduced an amendment to an appropriations bill with the following language: “Provided that no part of this appropriation shall be available for the payment of the salary of the present superintendent of the Great Smoky Mountains National Park.”

Ickes told Taylor he worried Senator Hayden had merely ignored his letter. Taylor hurried across the corridors of the Capitol and buttonholed Republican senators Arthur Vandenberg of Michigan and Robert A. Taft of Ohio. Both Vandenberg and Taft asked Hayden if he had shared the contents of Secretary Ickes’ letter with the members of the subcommittee and Hayden reluctantly admitted he had not. The two Republicans then demanded Senator Hayden let the other subcommittee members see the letter from Secretary Ickes.

As Ickes had hoped, that proved to be the decisive factor inside the subcommittee, which voted down McKellar’s amendment. Undeterred, McKellar took his fight to the floor of the Senate and only narrowly lost, 31 – 28.

The Knoxville News-Sentinel, delighted by the defeat of the McKellar amendment, crowed, “We hope and believe Harold Ickes is prepared to make a fight against the grand-pappy of all political pie hunters, Kenneth D. McKellar.”

The Sentinel’s delight would soon turn to disgust.

Following the results of the investigation of misuse of CCC funds and the defeat of the McKellar amendment, Secretary Ickes’ sung self-satisfaction began to fade. The Secretary began pondering his upcoming appearance before the Appropriations Committee and had heard the rumblings from Senator McKellar about the need for more economy in government. Ickes began to worry McKellar might very well inflict that same economy on his own department. Knowing of McKellar’s well-deserved reputation as a feudist who fought the length of the bar and carried the fight out into the street, Secretary Ickes grew increasingly nervous. The senator from Tennessee would have much to say about the coming budget and Ickes finally lost his nerve. Ickes quietly transferred J. Ross Eakin from the Great Smoky Mountains National Park to the Shenandoah National Park. Ickes, famed for his own volatile and prickly nature, had capitulated.

A shocked and indignant Knoxville News-Sentinel opined in an editorial, “The fact Mr. Eakin’s scalp today dangles from Senator McKellar’s belt is revealing in another particular.

“It reveals that ‘Honest Harold’ Ickes – – – who for years has carried the reputation of a ‘come-one-come-all’ fighter – – – picks his opponents . . .

“‘Honest Harold’ has really been tough with Adolph (sic) Hitler. But 5000 miles of sea water separate Mr. Hitler and Mr. Ickes. Senator McKellar is the tough boy in the same block. And Mr. Ickes is ‘too proud to fight.’”

Once again, K. D. McKellar had his way.