By design on May 13, 2012Comments Off on Halls advances to title game 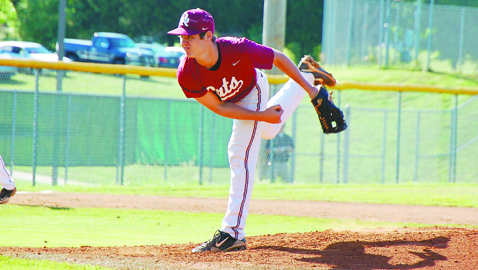 Hardin Valley Academy has fielded a varsity baseball team for four seasons and the Hawks have already proven that they are a force to be reckoned with on the diamond.

“This doesn’t get old,” said Hardin Valley coach Kirk Renegar, who saw his team shock the high school baseball world by claiming the 2011 title as the No. 4 seed. “This is an absolute tribute to our seniors who have been here through the dark times.”

The Hawks may be playing with their first-ever class of four-year seniors but on this night, it was a freshman who stole the show.

Pitcher Will Neely won a district title game less than one year after graduating from middle school.

“He’s a very talented athlete,” Renegar said of his freshman hurler, who surrendered just one earned run, five hits and four walks while striking out six in a complete game victory. “He has tremendous heart and he’s extremely competitive and when you take those things and combine them with the talent that good Lord has blessed him with, you have a special player.

Neely exhibited his grit in midway through the contest.

Halls (27-6) mounted a two-out rally in the bottom of the third when Aaron Hardy singled and advanced to third when Trent Whetsell singled. With runners on the corners, Neely retired Red Devils catcher Austin Smith, the District 3-AAA Player of the Year, on a deep fly ball to center field.

In the bottom of the fourth, he pitched his way out of a bases-loaded one-out jam with consecutive strikeouts.

“I just told myself that I needed to throw strikes and I believed in myself.”

Meanwhile, the Hawks, who will host Bearden in a Region 2-AAA Semifinal today (May 14), scored three runs in the top of the fourth on a pair of scoring singles. Pinch hitter Zach Sears opened the scoring with an RBI single of Halls pitcher Blake Shuler, who later surrendered a two-run hit to Anthony Gambuzza.

HVA added a run in the in the six when Ben Barnett scored on another single by Gambuzza.

For Halls, which travels to Farragut for the other regional semifinal today, it was a game of blown chances.

Halls tallied an unearned run in the fifth. Hardy led off the frame with a single and advanced to second and third on wild pitches. Hardy scored when Grant Painter reached on an error.

The Red Devils advanced to the title game with an 11-2 victory over Oak Ridge. Painter hurled a complete game and hit a two-run homer. Whetsell also blasted a three-run round tripper in the bottom of the third.

Halls advances to title game added by design on May 13, 2012
View all posts by design →