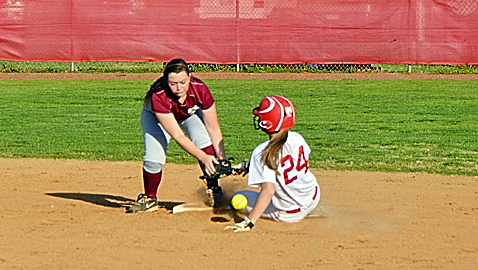 The Lady Devils got three runs in the opening inning of their 17-0 three-inning District 3-AAA victory over Oak Ridge at Halls High School.

And that was only the beginning.

Alyssa Mabe’s three-run homer accounted for all of the Lady Devils’ offense in the bottom of the first of Halls High’s three-inning victory over the Lady Wildcats. The Lady Devils then sent 14 batters to the plate in the second and scored 10 runs on just seven hits.

Halls (22-1 overall, 8-0 in the district) scored all of its second-inning runs with two outs.

The big inning packed plenty of fireworks. An RBI single by Katie Scott started the two-out rally. A two-run single by Paige Calloway extended the Lady Devils advantage to 6-0. Katie Corum, Kaleigh Galloway and McKenna Helton each drove in runs in the frame and McKinley Snyder added another two-run single in the frame in which Oak Ridge committed four errors.

Halls coach Bryan Gordon was pleased with his squad’s second-inning outburst with two out.

“That’s a real testament to them,” said Gordon, who saw his team score a combined 35 runs in Tuesday night’s sweep of a doubleheader against Campbell County. “They’ve battled through adversity this year and I’m really proud of them.

“We’re playing pretty good ball right now and we just have to stay focused and we’ll be OK.”

That’s perhaps the biggest understatement of the year. Halls, which defeated the Lady Cougars 14-0 and 21-0 on Tuesday, has lost just one game since being upset in 2013 by Farragut in last year’s Region 2-AAA semifinals.

Halls lost a 1-0 decision to Collierville early this season but the Lady Devils has been dominant throughout the season.

Other than the loss to Collierville, the only thing that has stopped the Lady Devils has been the weather.

“That will be a big week for us,” Gordon said.

Halls added three more runs in the bottom of the third before the Oak Ridge coaches pulled their team of the field with one on and one out.