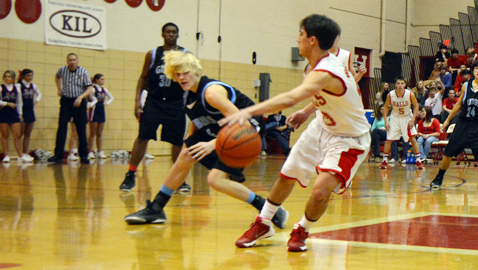 The 3-point shot proved to be a potent weapon for the Halls High School boys basketball team Tuesday night.

Halls (14-4 overall, 8-2 in the district) hit eight 3-pointers before halftime and set the tone for an easy district win over the Eagles.

“We can shoot the 3-pointer and we like to shoot 3-pointers,” Red Devils’ coach Randy Moore said. “They fell for us tonight. Sometimes, they don’t fall as much and you have to tighten up your defense.

Indeed, the 3-pointers rained down for Halls on this night. In the first half, Kenny White made four shots from beyond the 3-point arc. J.J. Corvette and Braxton Moore each made two before halftime and Robert Miller hit another.

Halls hit four more 3-pointers after halftime. Moore had two after the break. Miller hit another and Parker Keith also had one in the Red Devils’ lopsided victory.

The home team, which led 20-11 at the end of the first quarter and blew things open with a 24-5 run in the second stanza, boasted a balanced offensive attack.

Gibbs gets first win at Clinton: the Eagles might’ve had a long tough night Tuesday against the Red Devils but Thursday night in Clinton was a different story.

Gibbs edged the Dragons 52-50 in another District 3-AAA game in Anderson County.

Gibbs trailed the Dragons 50-44 early in the fourth quarter. But the Eagles’ defense stiffened and shut Clinton out over the final five minutes of the contest.