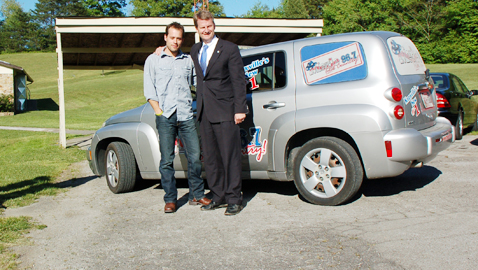 An epic battle of “David verse Goliath” is occurring in radio and it appears that David, or in this case, Jack Ryan, might emerge victorious. The award-winning DJ was recently let go by a powerhouse country radio station and was replaced by “syndication.” That means the radio station brought in a DJ that airs nationally on multiple radio stations at once to save money.

Ryan was left with an unknown future. For a short while it was a dark place in his life and he worried about how he was going to take care of his family. During a conversation at The Bistro at the Bijou, he told me that waiting for callbacks from applications “is the hardest thing I have ever had to deal with in my life. The phone’s just not ringing.”

After being on the job hunt for several weeks the phone did start ringing and independent country radio station 96.7 Merle FM hired him. Since then a groundswell of supporters have made the move to 96.7 FM. Ryan said, “the response has been overwhelming. I tell those close to me that we thought listeners and advertisers would ‘trickle’ their way to us; but it’s been more like a flood. And that’s not an exaggeration.”

The response has been so loud it has shaken the foundation of radio in Knoxville. Many industry executives in the radio business are watching. Many are probably wondering why so many listeners are so loyal to a guy on radio. Even without the huge signal or the huge marketing power of a major station, it appears Jack Ryan is succeeding. “We have something that separates us from everybody,” Ryan explained. “A very loyal base of listeners that will put up with a little less to feel they are contributing to the greater good of our society.”

As a country music beat writer and personal friend of Jack Ryan’s, I must say that I have witnessed a truly remarkable story. Mr. Ryan and I share a unique bond for country music. In fact, I needed an active member for my accreditation for the highly exclusive Academy of Country Music and it was Mr. Ryan who sponsored me.

Since joining Merle 96.7FM, Ryan has been going nonstop… with round the clock promotions, marketing, and finding time to do what he loves the most: Playing country music on the radio.

Jack Ryan is having a huge “Jack’s Back” party on Thursday, May 17 at the Cotton Eyed Joe following a free party at Elliott’s boots on Campbell Station Road from 4 to 6. “Jack’s Back” is a huge party in more ways then one. While the party itself is huge with great singers, great prizes, and great entertainment, the success of this event is what everyone in the industry will watching for.

On stage that night will be Homer Hart, Fairview Union, Southern Drawl band and East Tennessee’s own Con Hunley. A car full of cash will be given away at 10 p.m.

“So, to all my fans, (and I feel like a rock star for even saying that) I want to say thank-you for sticking with me through thick and thin,” Ryan said with a smile. “Thank you for giving Merle 96.7FM a shot. We play a lot of music you haven’t heard in a long time and I hope it’s refreshing to you. I guarantee you that if you stick with us, we’ll grow and our signal will too.”