By design on July 15, 2012Comments Off on Jacob Whitesides rocks Nashville 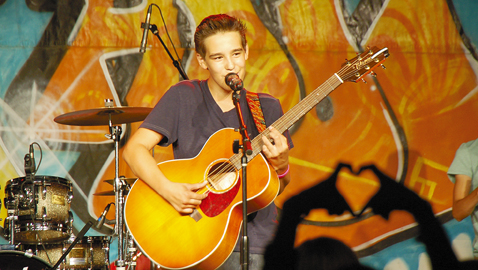 On Saturday, July 7th, Knoxville’s own Jacob Whitesides not only performed in Nashville, but took part in a three hour long autograph signing session with long lines of female fans. Jacob was selected to perform at the prestigious “Teen Hoot” festival. The festival is a two day concert where some of the top teen talent in the world get invited to perform on stage in Nashville. The show was simulcast live via the internet and was watched in 53 countries. The audience is nearly 100% young female teens. The event is a safe, alcohol-free environment that allows fans to connect with rising music talent who create a fan base via social media. Many of the young artists routinely post Youtube videos of themselves singing.  The fans then post the videos on their Twitter and Facebook pages. Word of the artist spreads as their popularity grows.

For Jacob Whitesides, this was an amazing opportunity and he took full advantage of his chance to showcase his talent. Before taking the stage, Jacob used every available minute to practice. He went outside in the record breaking heat wave to warm his vocal cords. He continued to practice on his guitar to make sure the people he was performing with were all in unison. He would  pause as the occasional fan would come up and ask for a picture. If he was nervous, it was hard to tell. His professionalism and composure was evident.

Taking the stage with Jacob were two of Nashville’s teenage artists: Jimmy James Hunter and Forest Miller. It was great for Jacob to team up with two veteran performers. As a new artist, taking the stage for the first time at Hootfest can be daunting. It is a heavy load with bright lights, screaming fans, and nerves running high. It is often tough for a new artist to put on their best performance. Not having to carry the full load of a performance solely by himself, Jacob was able to bring more energy to the show. The highlight of his set came when Jacob played the cover song “I’m glad you came,” by the British group “The Wanted.” It was a mesmerizing moment when the whole crowd sung in unison in between the piercing screams of adoring fans. When Jacob was finished literally hundreds of young females put their hands together in the shape of a heart, something many had been doing during the whole set.

Jacob Whitesides wasn’t the only connection to Knoxville at “Hootfest.”  Olivia Russell, a 15-year-old “Teen Hoot” fan who lives in the Fountain City area, was instrumental in securing a brand new four million dollar tour bus. Olivia was able to convince her parents to make some phone calls to friends in the bus touring industry. As luck would have it, the bus had a short open window of availability that perfectly fit into the schedule of “Teen Hoot.” The tour bus had just finished the “Beach Boys” tour and was not scheduled to tour for a few days. The owners of the bus allowed “Teen Hoot” to use the bus at cost (gas and driver fees).

For Olivia, it was important for her to get the tour bus. In an interview with her she stated that she wanted to obtain the tour bus so that artists see what they have to look forward to in their career.

The tour bus certainly inspired the rising teen talent. It gave the artists a chance to get to see and feel what success in the music industry is really like. The bus was used by artists for interviews.  At the end of the interview I turned to her parents and said, “I have seen many unique ways of getting backstage, but bringing a four million dollar tour bus, that tops them all.”