By design on May 19, 2013Comments Off on Knox Countians Believe In Drug Testing for Public Assistance 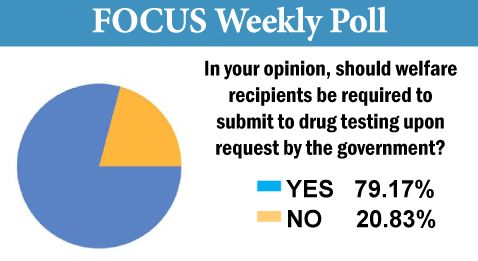 This week’s Knoxville Focus poll asked the question, “In your opinion, should welfare recipients be required to submit to drug testing upon request by the government?”

Almost 80% of likely voters said yes, welfare recipients should submit to drug testing upon request by the government.  Just over 20% of respondents were opposed to the idea.

Every district in Knoxville and Knox County supported the notion; the greatest number of people dissenting came in the First District where almost 44% of respondents were opposed to drug testing for welfare recipients.

The district most strongly favoring the idea was the Ninth, which is South Knoxville, where more than 90% supported the idea.

Knox Countians Believe In Drug Testing for Public Assistance added by design on May 19, 2013
View all posts by design →