By design on February 24, 2013Comments Off on Poll: Knox Countians Do NOT Support Tax Increase 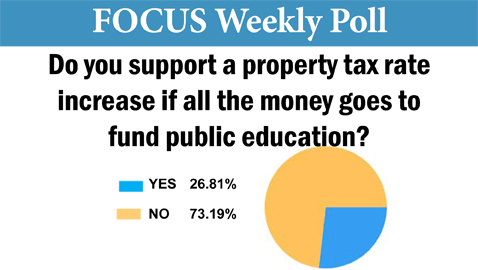 Last week the Knoxville News-Sentinel published the results of a poll, sponsored by local businessman Randy Boyd and other Chamber of Commerce-types, purporting to show 57% of the people of Knox County would support a tax increase if it all went to schools.  Using exactly the same language as the poll reported by the Knoxville News-Sentinel, The Focus surveyed more than 1100 likely voters.  The poll appearing in the Sentinel surveyed approximately 900 registered voters.

Voters were asked the question, “Do you support a property tax rate increase if all the money goes to fund public  education?”

Little data about the Chamber poll has been released, other than the purported results.  As usual, The Focus is releasing all of the data compiled from the Focus survey.

1119 likely Knox County voters responded to the poll with a resounding “No.”  Almost three quarters of respondents, 73.19%, said they would not support a property tax increase even if all the money went to public education.

The response was uniform throughout the City of Knoxville and Knox County.  Almost 67% of respondents in the First District opposed the idea of a tax increase for education.  The Second District was even more solidly opposed to the idea with roughly 74% opposing a tax increase.

The numbers are clearly at odds with the poll released by the Knoxville Chamber and published by the News-Sentinel.  Focus publisher Steve Hunley said, “We have released all our supporting data.  The Sentinel has questioned our poll in the past, but the fact is they have come out in support of a poll that hasn’t released any supporting information to uphold its poll’s final numbers.

“There’s a thirty point difference in their poll and the poll conducted for The Focus.  I am absolutely confident in the numbers in The Focus poll.”

Poll: Knox Countians Do NOT Support Tax Increase added by design on February 24, 2013
View all posts by design →