By design on March 3, 2013Comments Off on Knox Countians Split on School Security 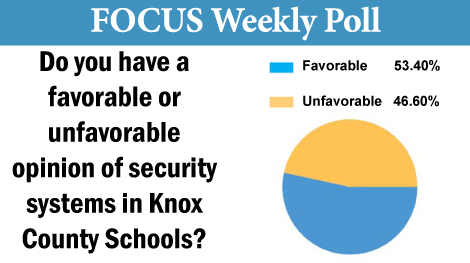 This week’s Knoxville Focus poll posed the question, “Do you have a favorable or unfavorable opinion of security systems in Knox County Schools”?

The district with the highest percentage registering a favorable opinion of school security systems was the First District, with just over 66%.

The Fourth District, which is centered around Sequoyah Hills, was almost even divided with 50.94% saying they have a favorable opinion of school security systems.

Obviously Knoxvillians and Knox Countians are deeply divided on this issue.

Knox Countians Split on School Security added by design on March 3, 2013
View all posts by design →