By design on December 2, 2012Comments Off on Knoxville Focus for Monday, December 3 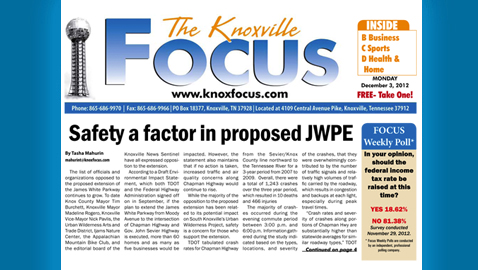 Safety a factor in proposed JWPE

By Tasha Mahurin
mahurint@knoxfocus.com
The list of officials and organizations opposed to the proposed extension of the James White Parkway continues to grow. To date Knox County Mayor Tim Burchett, Knoxville Mayor Madeline Rogero, Knoxville Vice-Mayor Nick Pavlis, the Urban Wilderness Arts and Trade District, Ijams Nature Center, the Appalachian Mountain Bike Club, and the editorial board of the Knoxville News Sentinel have all expressed opposition to the extension.
According to a Draft Environmental Impact Statement, which both TDOT and the Federal Highway Administration signed off on in September, if the plan to extend the James White Parkway from Moody Avenue to the intersection of Chapman Highway and Gov. John Sevier Highway is executed, more than 60 homes and as many as five businesses would be impacted. However, the statement also maintains that if no action is taken, increased traffic and air quality concerns along Chapman Highway would continue to rise.
While the majority of the opposition to the proposed extension has been related to its potential impact on South Knoxville’s Urban Wilderness Project, safety is a concern for those who support the extension.
TDOT tabulated crash rates for Chapman Highway from the Sevier/Knox County line northward to the Tennessee River for a 3-year period from 2007 to 2009.  Overall, there were a total of 1,243 crashes over the three year period, which resulted in 10 deaths and 466 injuries
The majority of crashes occurred during the evening commute period between 3:00 p.m. and 6:00 p.m.  Information gathered during the study indicated based on the types, locations, and severity of the crashes, that they were overwhelmingly contributed to by the number of traffic signals and relatively high volumes of traffic carried by the roadway, which results in congestion and backups at each light, especially during peak travel times.
“Crash rates and severity of crashes along portions of Chapman Hwy are substantially higher than statewide averages for similar roadway types,” TDOT spokesman Mark Nagi told The Focus.
Traffic safety was one of the concerns identified by the Chapman Highway/James White Parkway Task Force first appointed to study the issue. After identifying the basic issues and transportation needs in the Chapman Highway corridor, assessing various options/solutions to those problems, and gathering input from the public, the majority of Task Force members believed that there was both a purpose and a need for extension of the James White Parkway south from Moody Avenue to Governor John Sevier Highway.  They also stated that safety of the transportation system could be enhanced by creating a divided highway with full access control However, due to the potential environmental impacts, an EIS study was requested by officials and approved in 2005, with a final draft completed earlier this year.
“The Task force identified the need from increasing demand for a better commuter route for the fast growing areas of southern Knox County and the Seymour portion of Sevier County which could be addressed by the James White Pkwy,” Nagi explained.
TDOT has scheduled a public meeting to be held at South-Doyle Middle School on December 6, at 5:00 p.m.
While those opposed to the extension have garnered a great deal of media attention regarding the matter, those who would like to see the project come to fruition have also contracted TDOT for more information.
“Individuals have communicated asking how they can make their approval known about the project.  They have been directed to make written statements via the comment sheet available at the meeting or to write in to the address below after Dec. 6th post marked by Jan. 4, 2013 to make their opinion part of the official record,” Nagi explained.
Those comments can be mailed to: Public Hearing Comments, ATTN: James White Parkway DEIS, Tennessee Department of Transportation, Suite 700, James K. Polk Building, 505 Deaderick Street,
Nashville, Tennessee  37243-0332.

Knoxville Focus for Monday, December 3 added by design on December 2, 2012
View all posts by design →