By design on October 7, 2012Comments Off on McMillan Challenges Grievance Policy 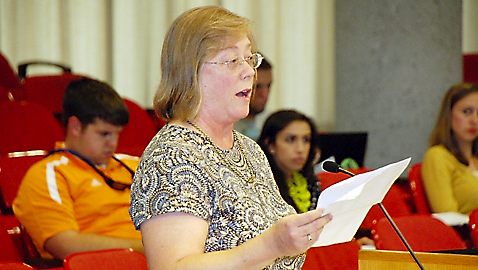 Feels Good Teachers Should Be Protected

Mike McMillan, East Knox County’s member of the Board of Education, challenged the grievance policy being proposed by Superintendent James McIntyre. The grievance policy is established to allow teachers to file a complaint on their own behalf. Most grievances are never heard by the Board of Education and Dr. McIntyre was proposing significant changes to the existing policy which would have the effect of reposing virtually all power in the Superintendent.

“I didn’t like where that was going,” McMillan explained. “On the one hand, the Board members are being told we are not in compliance with Tennessee State law, yet on the other hand, the proposed changes are not State law. They are policies established by the State Board of Education.”

McMillan is the only member of the of the Knox County Board of Education who is a former classroom teacher.

There are some twenty-five grievances filed currently with twelve of those coming from one school, Powell Middle. Superintendent McIntyre explained the problem with the evaluations at Powell Middle arose from “miscommunication” between the principal and teachers. Virtually all of the grievances came from instructors outside language, social studies, math related subjects, and the sciences. The chorus director, band director, art teachers had filed grievances and apparently the State of Tennessee (and Knox County) don’t evaluate these educators in their own field, but require them to attach themselves to social studies, math, science, and language arts subjects to be evaluated.

“I think that’s just silly,” McMillan said. “Evaluating an art teacher or choral director in a subject he or she doesn’t teach shows just how flawed the system is and the facts at Powell Middle School demonstrate that.”

McMillan says he objects to all power being placed in the hands of the Superintendent.

“Really good teachers should have some legitimate recourse to protecting themselves and the fact is it was just embarrassing how few teachers came out to support the budget this year,” McMillan stated. “The Superintendent and many members of the Board have realized that fact and suddenly everybody is bragging on teachers.

“Just how we resolve this grievance process is certainly going to send a message to teachers all across the county. The actions of the Board and Superintendent need to reflect the rhetoric.”

McMillan stopped the grievance train dead in its tracks, using a Board member’s prerogative to cite personal privilege. McMillan claimed the subject was so important it merited study and time for the Board members to evaluate the information, some of which was still being sent to members hours before they were expected to vote. McMillan asked for a delay of thirty days, which was granted by the Board.

“We’ll consider this next month and hopefully have all the information we need to make an informed decision,” McMillan said.