By design on February 2, 2014Comments Off on McMillan, defensive guru, reconnects with Carter football 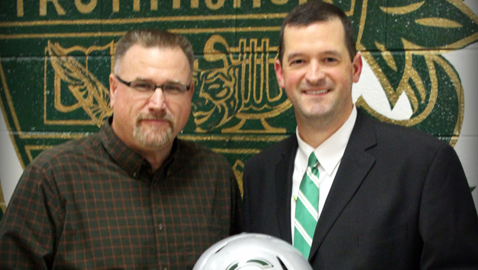 When Jeff McMillan played football for Carter High School in the mid-1970s, the “Green Hornets” were beginning a 10-year period when they were known more for their defense than anything else.

Almost 40 years later, McMillan, who has earned a reputation of being one of the state’s best defensive coordinators, is Carter’s new head coach.

“Carter was known for good defenses back in the day,” said the 54-year-old McMillan via e-mail last Thursday. “All championship programs play great defense, and we will be known as a top defensive team again.

“Great defenses play with great intensity, effort and toughness. You may have an off night offensively, but with those three ingredients you should be consistent defensively game in and game out.

“I have been a defensive coordinator the past 21 seasons and will continue in that role. I am in the process now of putting the staff together, and hiring an OC (offensive coordinator) is the first position I will fill. We will be exciting and multiple on offense with the ability to run the ball effectively and throw the ball down field.”

McMillan was a defensive tackle at Carter and a good one. In the autumn of 1975, his junior season, the 9-1 Green Hornets recorded three shutouts and held five opponents under 10 points before losing to Chattanooga McCallie in the Scenic City Bowl.

As a senior the following year, Carter gave up only 77 points in 11 games. McMillan was named to the All-Knoxville Football League team and received honorable mention on the All-East Tennessee squad. He also was defensive MVP as Coach Gary “Butter” Hubbs’ team made a return trip to the Scenic City Bowl and beat Red Bank 20-13 to post a 10-1 record.

McMillan left for college – playing at Auburn in 1977, then transferring to Austin Peay State where he finished his eligibility and degree – and Carter continued to make headlines on the defensive side of the ball.

Its 1981 team was 9-1 and held eight foes under 10 points with five shutouts. The 1982 squad won six games, all by shutouts. In 1986, Carter went 10-0 in the regular season, blanking five foes, before falling to Clinton in a first-round playoff game.

Prior to landing his first head post, McMillan was associated with winning football programs at Central and Fulton. He coached under Joel Helton at Central for 24 years and helped the Bobcats make 15 playoff appearances.

The past three seasons, McMillan has been the defensive coordinator for Rob Black at Fulton, where the Falcons captured back-to-back Class 4A state championships in 2012 and 2013. McMillan’s defensive unit recorded seven shutouts and allowed only 9.6 points per game in a 15-0 season last fall.

“We are excited to name Jeff McMillan as our new head football coach,” said Carter High Athletic Director, Dr. Chad Smith, in his official statement. “We are confident that Jeff will build upon our successes that we have had both on and off the football field. Coach McMillan is a winner as evident by the people and programs he has been associated with. Furthermore, Jeff is one of us. As a graduate of Carter High School, Jeff knows what it means to be a Carter Hornet and we look forward to him instilling those values in our young men.”

McMillan replaces Heath Woods, who resigned after 12 years at Carter. Woods’ Hornets finished 9-2 this past season.

McMillan says he’s most excited about “returning to the community I’ve lived in all my life, and having a positive impact in the community as a whole.

“I have many ties to the community and fellow alumni. My wife has taught at Carter Elementary for 28 years, my dad was a principal at Carter Middle when he retired, and both of my sons attended Carter schools until high school.

“Even though I’ve lived in the community all these years, it’s very exciting to return as head football coach and have a greater opportunity to positively impact the young people in the Carter community.”