By design on May 4, 2014Comments Off on Our Neighborhoods: Downtown Knoxville 2 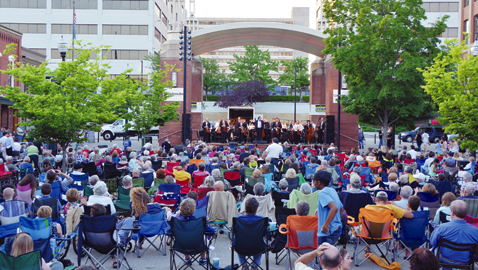 This week we take a second look at downtown Knoxville, everyone’s central core in Knox County. It’s part of our continuing series about “Our Neighborhoods” and downtown is worth a second look. For those of us not living downtown there’s much that is surprising and historic that we probably don’t know or forgot. Living downtown is another matter and a growing number of people, especially young professionals, are choosing to do just that.

Last week I chatted with a fellow who has lived downtown for several years. He’s single and finds that there’s a certain spirit there, a more active and progressive tone than other places in the city or in the county. He said that he has a car but rarely uses it, preferring his bicycle or motorcycle.

I suppose if you are a young professional and work downtown it is handier to live there than to drive in from outlying neighborhoods. There are a huge number of corporations, businesses, and federal, state and local government jobs downtown. Groceries are about a mile away, either the Three Rivers Market in Happy Holler or the Food City on Western. Restaurants, entertainment , shopping, history and culture are all within walking distance

Jennifer Holder has lived downtown since 1993 and has worked downtown since 1996. She’s president of Pirate Girl PR which she started in 2011 and works with clients like Gentry Griffey Funeral Chapel, First National Bank, The Trust Company, Tupelo Honey Café, Global Intellectual Property Asset Management, Goodwill Industries, and The Shrimp Dock.

“The vast majority of which are for the better,” she told The Focus. “We have beautiful streetscaping in many areas of downtown, public art, public parks, so many wonderful restaurants and gathering holes, the majestic Tennessee Theatre, Bijou Theatre, and Regal Riviera and some of the most entertaining street fairs and festivals in the region.”

“It’s easily walkable although you have to be careful in crosswalks because many of our drivers don’t know what a pedestrian walk sign means,” she said.

“For me personally one of the biggest perks is being able to walk out my front door and go for a 3 to 6 minute run based on my mood – through World’s Fair or Morningside Parks, Volunteer Landing or the campus at UT – in less than an hour, without having to drive to a park,” Holder says.

You probably know Market Square. Anyone who has spent anytime downtown either has walked through there or heard about it. Bet you didn’t know that originally there was a large market place there for area farmers to sell their crops. The land was donated by William G. Swan and Joseph A. Mabry and since 1854 Market Square has been a beehive of activity.

Probably the most noted event there was the occupation by Union troops, who used the market house as a barracks. In the 1870s Peter Kern opened a confection store there which became Kern’s Bakery. In 1868 Knoxville built its City Hall at the north end of the Square.

In the 1950s Mayor George Dempster began efforts to revitalize the city and made changes to Market Square. Dempster may be best known for his invention, the Dempster Dumpster, which is used now worldwide for the collection of trash.

The old Market House burned in 1960 and the area became an open pedestrian mall without a through traffic street.

Today unique restaurants and shops are located from one end to the other on both sides of Market Square. The square is a lunch-time favorite of downtown workers and residents. The square often hosts musical events, gatherings, and a seasonal farmer’s market. The square has been a place for political speeches, drawing the likes of Walter Mondale, Ronald Reagan, and William Jennings Bryan.

Upcoming events include Jazz on the Square tomorrow, May 6th from 8 until 10 p.m. On the 7th there’s the Farmer’s Market.

Thursday music concerts return on May 8th and on the 9th Movies on the Square begins.

On May 10th Blank Fest returns, sponsored by the Tennessee Veterans Business Association, from 5 p.m. until 10 p.m. with entertainment and music.

Want to peek inside the historic Blount Mansion and see what’s been happening since it was closed last year for repairs? On Sunday, May 31st, you’ll get your chance to do that, for free. From 10 a.m. until 2 p.m. the mansion will celebrate Statehood Day.

The next step is repairs to the main part of the house, including all doors and windows.

The Statehood Day Open House will feature the home with no furniture inside. The furniture is being stored and the staff is cataloguing and cleaning the collections and promises, when complete, to share interesting stories with the public.

There’s a Statehood Celebration Dinner June 6th for anyone interested. Admission is $100 and sponsorships are available for $500 including two tickets to the party. Corporate sponsorship is available for $1,000 and includes 4 tickets.

On the same day the mansion has a Grand Opening of a new exhibit: “Becoming the Volunteer State: The war of 1812 in Tennessee.”

The Blount Mansion is located at 200 West Hill, just off Gay Street, and is operated by the Blount Mansion Association. You can get more information by contacting the historic home at 525-2375 or find them on line at 111.blountmansion.org.

If you are new to east Tennessee or the southeast region you’re probably wondering why so many things in the Knoxville area are named “Sterchi.”

James Sterchi and his brothers, J.C. and E. H. Sterchi, were sons of a Swiss immigrant who originally settled in the Wartburg, Tn. area among many other Swiss families. The Sterchis moved to north Knox County and established a farm. James and his brothers founded Sterchi Brothers Furniture in 1888 and by 1896 were publishing a catalog.

After a fire in 1897 destroyed their business, they relocated and built a new warehouse in the 100 block of Gay Street. Their fame grew as retailers and, by the 1920s the Sterchi brothers had 18 stores in the southeast. James bought out his brothers and, by the end of that decade, Sterchi’s was the largest furniture store chain in the world, it is said, with 48 stores, manufacturing plants, and even a lumber operation in Kentucky.

James Sterchi expanded his farm to more than 1,400 acres, started a large dairy farm, and built his Sterchi Mansion in 1910. The home, now owned by Buddy and Linda Malin, has 5,800 square feet of living space and is on the National Register of Historic Places. The Sterchi family called the home “Stratford Hall” but, today, it’s the Sterchi Mansion to most local people.

The home is a land mark at 809 Dry Gap Pike and much of the farm land is now a large subdivision of homes.

The Sterchi building, now Sterchi Lofts, was renovated into modern loft apartments in 2002 and the building is divided into everything from a studio suite to four bedroom apartments. You can still see the Sterchi Department Store sign atop the building if you look north on Gay Street.

Sterchi Lodge isn’t in Knoxville but near the North Carolina-Tennessee line off I-40. It belongs to the Church Street United Methodist Church on Henley Street. The Sterchi family gave the church the funds to build the retreat, which is still in use. It’s 60 miles from Knoxville and was funded by the family in memory of one of their children, John Sterchi.

The James White Greenway stretches along the river from the James White Parkway bridge for one mile to the Neyland Greenway. Most people enter the paved walking path at the riverside parking lot at the mouth of First Creek below the Ruth Chris Steak House at Volunteer Landing.

The green way also links with the Governor Ned McWherter Riverside Landing Park under the James White Bridge and connects with the Morningside Greenway there. The city plans to eventually continue the greenway across the bridge and connect it with the Will Shelton Greenway that runs through Island Home.

The World’s Fair Park is connected to the Neyland Greenway and the waterfront by the Second Creek Greenway, which also links the University of Tennessee. It is known for its dramatic topography.

As part of the former Baptist Hospital come down many people are anxious for the new development there, just across Henley Street’s bridge from downtown. They are awaiting the addition of a new South Waterfront.

Once the old hospital is renovated and additional buildings added, a hotel and retail businesses will be created. The waterfront behind the complex will be reworked with a pavilion and sidewalks stretching beneath the Henley Street Bridge and connecting to the river walk at City View Apartments.

The First Presbyterian Church was the first church building in the city, organized in 1792 and remains on the original site. Knoxville founder James White had his son-in-law Charles McClung to lay out the city and reserve White’s “turnip patch” for a church and graveyard. The Rev. Samuel Carrick was the first pastor but served without a church building.

Today the church takes up a full block at 620 State Street because of later additions to the building.

The First Baptist Church began in 1843 with a meeting in the old courthouse. Baptisms took place in the waters of First Creek and the church began with 46 members. The original church was built on Gay Street in 1850.

The Church Street United Methodist Church, once located on Church Street, is now at 900 Henley Street. Founded in 1816 as “White’s Chapel” on East Hill Avenue the Church Street location began in 1836. During the Civil War the church was a hospital and stable. Members split over loyalty to the North and South and later had a legal fight over ownership of the church. In 1928 the church was destroyed by fire and in 1931 the new Gothic structure opened on Henley.

All Souls Church is located at 4 Market Square and meets at 6 p.m. on Sundays.

St. John’s Cathedral is located at 413 W. Cumberland Avenue and is 158 years old. Sunday worship is at 8 a.m. and 10:30 a.m. The church features Knoxville’s only outdoor labyrinth.

Knox Life Church holds services in the Bijou Theater at 10 a.m. each Sunday.

Our Neighborhoods: Downtown Knoxville 2 added by design on May 4, 2014
View all posts by design →