By design on February 3, 2013Comments Off on Panthers end perfect conference season with win at Halls 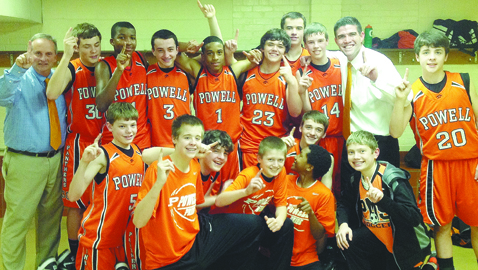 By Ken Lay
Powell Middle School’s boys basketball team won its second consecutive regular-season Knox County Middle School Basketball Conference Championship last week.
The Panthers (19-1 overall, 13-0 in the KCMSBC) clinched their second consecutive conference title with a victory over Carter on Monday, Jan. 28 in the final game in Carter’s gym. The Hornets will play in a new facility next season.
Powell’s work, however, wasn’t done. The Panthers culminated a second consecutive perfect conference season with a 50-37 victory over rival Halls Tuesday night.
“I’ve just been blessed to have two great groups of kids,” Panthers coach Darin Courtney said. “These regular-season titles are hard to win.
“They’re even harder to win than the tournament championships. The season lasts all year. The tournament lasts a week. We’ve been tested and we’ve had a double overtime game. I’m proud of our kids for winning back-to-back championships.”
The Panthers were tested early Tuesday night as the Demons (12-7, 7-6) made things tough.
“We started out okay,” Halls coach Bill Warren said. “We just didn’t shoot well.
Halls and Powell were locked in a 9-9 tie late in the first quarter before the Panthers scored the final six points of the frame.
Warren said that his squad struggled to find its rhythm due to lack of practice time.
“We’ve had so many days off [due to recent inclement weather] that the schedule has been consistent,” Warren said. “Our kids played hard.”
The Demons certainly put up a valiant effort. The two teams slugged through an even second quarter where both scored just nine points. The game remained close throughout the third quarter before Powell finally took control in the final six minutes.
“Halls came to play today,” Courtney said. [Halls post player J.T.] Freels got off to a fast start. They also got a big contribution from [Bryson] Newman and Bryce Hodge is a great outside shooter.”
Hodge scored eight of his 13 points before halftime and Freels finished with 14 points. Newman came up with a pair of clutch baskets to keep the game close in the third quarter.
But in the end, it was Powell guard Amari Rodgers who stole the show. Rodgers scored 15 of his game-high 21 points in the second half.
Forward Tanner Kesterson added nine points and was a force on the boards.
“I can’t say enough about Tanner Kesterson,” Courtney said. “I think he’s the best rebounder in Knox County and he’s’ three inches shorter than anybody that he’s playing against.”
Powell’s defense also stiffened in the latter stages of the game. The Panthers held the Demons to just four points over the final six minutes.
Now that the regular season is complete, the Demons and Panthers will now turn their attention to the James A. Ivey, Jr. Memorial Basketball Tournament. Powell is the defending champion but a repeat title won’t be easy.

Panthers end perfect conference season with win at Halls added by design on February 3, 2013
View all posts by design →