By design on February 23, 2014Comments Off on Panthers turn to veteran coach John Allen to bring stability to the Powell Football Program 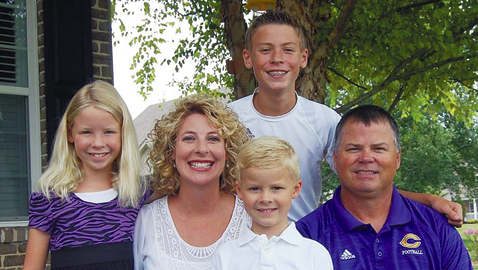 Radio Voice of Powell Panther Football on AM 620 WRJZ

In early December of 2011, it looked like the Powell Panther football program had ascended to the upper echelon of high school football in east Tennessee. After all, that 2011 team had just missed bringing home the school’s first state championship in a heartbreaking 17-14 loss in the Class 5A finals to Henry County, and had gone 11-1 the year before. Twenty-five and two in those two years combined and returning a solid nucleus of players in to the 2012 season.

But when popular head coach Matt Lowe shocked the Powell community with his resignation just two months later, it began an unlikely scenario that culminated earlier this month with the hiring of John Allen, who became the 4th head football coach at Powell in the last 28 months.

After Lowe, 27-year-old Derek Rang was hired and took the Panthers to the state semi-finals and a 12-2 record in 2012. Rang resigned last March and is currently an assistant football coach at Carson-Newman University.

Next was another 27-year-old, first time head coach in Tobi Kilgore. Kilgore led the Panthers to an injury and off the field issue plagued “perfect storm” of a 5-5 season, and the first time that Powell had missed the playoffs since the 2000 season. Kilgore resigned in December to accept the head football coaching position at Karns High School.

Looking to return some stability to the top of the program, Powell Principal Nathan Langlois and Athletic Director Brad Carr turned to a veteran head coach, as they have hired 49-year-old John Allen, who, to this point, has spent his entire teaching and coaching career in the Southeast Tennessee/North Georgia area.

His head coaching stints include stops at Fort Oglethorpe (GA) Lakeview, Bradley Central High School in Cleveland, Chattanooga’s Silverdale Academy, and most recently Chattanooga Central High School. Allen, whose overall head coaching record stands at 76-75, has built his reputation by taking over struggling programs and improving them during his tenure. While Powell is a program that has been more than competitive on the field over the last few years, it is a program that needs some stability in its leadership. Langlois and Carr are looking to Allen to provide that stability.

Orphaned at the age of 11, Allen was adopted by a teacher and a dairy farmer in Rhea County, where he grew up playing high school football at Rhea County High School for one of the legendary coaches in Tennessee, Bill Horton.

“They took me in and became huge influences in my life”, Allen told me. “My mother taught me the importance of an education, and my Dad, Taft, instilled in me the values of working hard, as I did on the dairy farm growing up. Growing up on a dairy farm wasn’t a whole lot of fun,” he told me with a smile on his face. “That will motivate you to get a college education, I can tell you that.”

Allen also credits Horton for helping him get in to teaching and coaching.

“Bill is the man who gave me my first coaching job out of college, and he is also the man who led me to Christ. Bill was a big part of my wanting to be a coach, and a big part of the philosophy I have today. I owe a lot to Bill Horton.”

From Rhea County High, Allen went on to play football at Tennessee Wesleyan College, during the time that TWC fielded a varsity football program. He has also earned graduate degrees from Tennessee Tech and Lincoln Memorial University.

With the revolving door that has been the Powell head football coaching office, Powell administration had a definite set of criteria they were looking for this time as they worked through the hiring process, according to Carr.

“We had a plan going in, and that plan was to be proactive going in, and not reactive. We worked through the process and narrowed it down to three finalists, and Coach Allen was one of those three and we feel very comfortable that he was a great choice. He really just blew us all away when he had the chance to meet and talk to our entire administrative team. It just all came together well.”

As one might probably imagine, a program with the success Powell has had over the past few seasons wasn’t short on applicants.

“We had a really good applicant pool to choose from, and I mean some really good ones. I know that Coach Allen is going to be very humble about the entire process, but we feel like we got a very good one in John Allen,” Carr said. “We had qualities that we were looking for in a coach, and from the get go John Allen exhibited those qualities. I’m sure that he will tell you that we put him through quite a bit during the interview process, but he was great and genuine about everything we asked him and he handled it like a champ.”

“Stability was a big thing, but another thing that was on mine and Mr. Langlois’ minds was that John has a track record of coming in and making programs better,” Carr said. “That is one of the things that impressed us the most.”

Allen’s coaching career began as a graduate assistant at Tennessee Wesleyan, and then he spent six years as an assistant at his high school alma mater, Rhea County, working under Horton.

From there he went to Lakeview for his first head coaching gig and had great success playing in a tough North Georgia district.

“I had a great coaching staff at Lakeview. We went 46-19 and beat Dalton for the first time in school history,” Allen told me.

From there Allen’s path took him to Cleveland, TN, where he became the head coach at Bradley Central High.

“At that point in my life I had become very arrogant, and I just did a terrible job there. I’ve always said that I wish that I had done a better job for the Lord there, but I didn’t and I have always owned that,” Allen humbly stated.

After that one year stint in Cleveland, Allen moved on to Silverdale Academy in Chattanooga, a private school that was just starting a football program. In his six years there, Allen oversaw the startup of the football program and also worked as an administrator at the school. He took that program quickly to the top of the district, and had them in the playoffs the last three years he was there.

For the past three years he served as the head coach at Chattanooga Central. “We went on to (Chattanooga) Central and did a good job there,” he said. “We helped them raise $100,000 to upgrade the program, and we got them to the playoffs for the first time in many years.”

Now it’s on to Powell, where tradition says that it is a solid football program, and it sits in a community that is well known for supporting all of its school athletic teams, and especially the football program.

“I do know how I got this (Powell) job. God ordained it, and I really do believe that,” Allen told me. “I had been interviewing for jobs that weren’t nearly of the caliber that Powell is, and I filled out the application online, got a phone call for an interview, and here I am. God is faithful and I am very humbled to be the head football coach at Powell High School. This program is the kind of program you get in coaching to get to. It’s not like they are giving me a handful of dirt and telling me to build something. This is already a great program.”

Since being named the head coach the last week of January, Allen has been splitting time between his Chattanooga home and Powell. He will be teaching at Chattanooga Central until the end of the school year, yet he is coming to Powell two afternoons a week to prepare for spring practice, which will be held in May.

In the meantime, Allen has had the tough task of putting together a coaching staff, and with half of the previous staff going to Karns with Kilgore, that’s not been an easy task.

That leaves four or five slots for new hires, which Allen has been interviewing candidates for and is nearing solidifying those coaches to his staff.

A lot of discussion throughout the Powell community has been on Allen’s offensive philosophy. Allen is traditionally a Winged-T offensive coach, while Powell has run the spread option offense for the past few years, and was a veer oriented offensive team prior to that. Allen has indicated to me that he plans on running a Pro I set formation based offense, but as any good coach will do, making sure that the offensive scheme fits his personnel.

“I’m smart enough as a coach to know that you have to fit your offense to the talents of the players you have. We’ll do that at Powell. We don’t want to put our kids in to a situation where they can’t be successful.”

Once school is out in May, Allen will be moving his family, wife Amy, and three school aged children, Will, Elizabeth, and Henry, to Powell.

And what can Allen say to those skeptics in Powell who are suffering from “coach fatigue” with that revolving coaching door?

“I can’t change the past. All I can do is to do what I say I will do. I am moving my family here – 97 miles from our current home. My wife has a great teaching job in Chattanooga, and her parents are close by there. We’re not leaving that and coming to Powell with the intent of being short timers. I would like to finish my career here, and I plan on coaching for at least 12 or 13 more years.”

Panthers turn to veteran coach John Allen to bring stability to the Powell Football Program added by design on February 23, 2014
View all posts by design →