By design on July 7, 2013Comments Off on Pedal Power 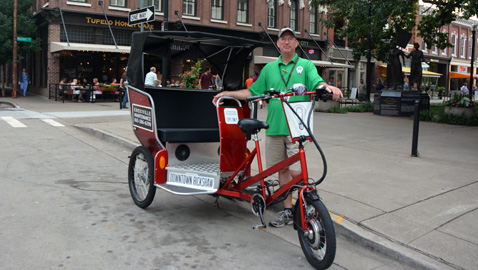 A fun and innovative idea of using pedal power for downtown transportation has come to fruition in the Central Business Improvement District Area. “Downtown Rickshaw” is a new company that provides rides to individuals looking for a short trip in the heart of downtown.

According to Bill Stone, manager of the company, the clientele is diverse. He estimates that 60% of his passengers live downtown, 20% come from Knox County, and the remainder consists of tourists. Since the concept is new, many people are hesitant at first to take a ride. On an average day in downtown Knoxville, about 20 passengers use each rickshaw.

The rickshaws are gaining in popularity. One growing trend noticed by the company is the rise in requests for weddings. Normally, the rickshaws transport people to shows, the Old City, or World’s Fair Park.  They also pick up passengers at hotels and give tours. “We provide a nice leisurely, relaxing, and eco-friendly way to see Downtown Knoxville,” stated Mr. Stone.

Every day is a new adventure and that is what Mr. Stone enjoys the most about his job. He is constantly interacting with random strangers so every shift is different. At night, he occasionally has to interact with alcohol-fueled patrons which can be a good thing or a bad thing. His top priority is safety. Most nights he takes pleasure in knowing that by his transporting patrons who might have had too much alcohol back to their hotel, he has created a better and safer situation for everyone.

Downtown Rickshaw operates their service from money generated by advertisements placed on their pedal vehicles. The rickshaws do not charge for the service they provide; drivers only accept tips.

This business model is very unique. In addition to the sign space rented out on the rickshaw, the drivers also use verbal advertising. When they pass an advertiser’s business, they point it out it to their passenger and tell the passenger about it. For example, if the passenger asks to go to Market Square because they are hungry, the driver can recommend a restaurant and highlight the special of the day.

Having the ability to be versatile, as well as visible, has allowed Downtown Rickshaw to create one of the most innovative and potentially game-changing ideas in recent memory.

Pedal Power added by design on July 7, 2013
View all posts by design →