By design on December 15, 2013Comments Off on POLL: Knox Countians Don’t Believe McIntyre’s Contract Should Have Been Extended 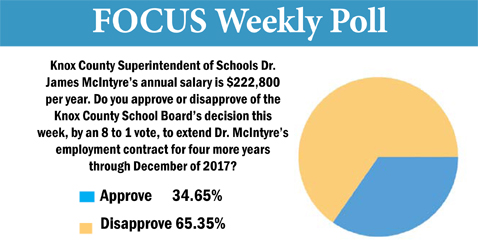 Almost two thirds of Knox County voters don’t believe the Board of Education should have extended Superintendent James McIntyre’s contract.  Likely voters were asked, “Do you approve or disapprove of the Knox County School board’s decision this week, by an 8-1 vote, to extend Dr. McIntyre’s employment contract for four more years through December of 2017?”  The poll also told voters that McIntyre’s annual salary is $222,800, although that does not include his benefits.

Fully 76% of voters inside the First District disapproved of extending McIntyre’s contract, which cannot be good news for Board member Gloria Deathridge, who is up for reelection next year.

More than 60% of residents polled in the Third District said they did not believe the superintendent’s contract should be extended.

A bare majority, 51.85%, of Fourth District voters said they felt the superintendent’s contract should be extended.  Slightly more, 53.85%, of voters in the Fifth District said McIntyre deserved to have his contract extended.

Board Chair Lynne Fugate represents the Fourth District and a bare majority of her constituents supporting McIntyre’s extension may mean trouble ahead as she approaches her own reelection campaign.

Slightly more that 63% of residents of the Sixth District said they did not think the Board of Education should have extended McIntyre’s contract.  Incumbent Board member Thomas Deakins has said he will not be a candidate for reelection, although he supported extending McIntyre’s contract.

A whopping 77.55% of voters inside the Seventh District say they did not believe McIntyre’s contract should have been extended, which is dire news for Board member Kim Sepesi Severance.  It is hard to see how Severance can parlay her support for McIntyre into a second term on the Board of Education.

73.91% of voters inside the Eighth District said they did not believe McIntyre’s contract should be extended and Board member Mike McMillan was the only one who opposed extending the superintendent’s contract.

The general consensus is Trainor is likely the most vulnerable incumbent going into next year’s elections and the poll numbers seem to confirm Trainor’s own prediction she may have only a few more months to serve.

POLL: Knox Countians Don’t Believe McIntyre’s Contract Should Have Been Extended added by design on December 15, 2013
View all posts by design →