By design on May 5, 2013Comments Off on Powell ‘survives’ tournament tussle with Oak Ridge 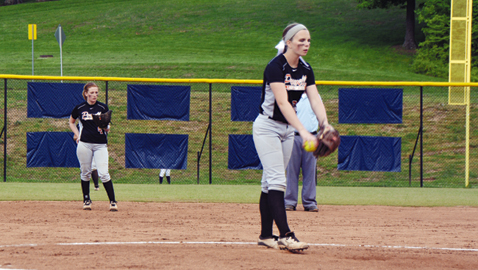 Jeff Inman had to breathe a sigh of relief Thursday night.

“We survived,” Inman said after his Powell High School softball team advanced with a 3-0 victory over Oak Ridge Thursday night in the opening round of the District 3-AAA Tournament at Hardin Valley Academy. “This wasn’t pretty but we survived and advance because our first couple of games are single-elimination.

“We played good defense but we didn’t hit the ball well. We’re going to have to hit the ball better than we did tonight.”

Powell, the tournament’s sixth seed, scored twice in the bottom of the first inning. Lady Panthers’ second baseman Tori Hutchison gave Powell (18-19) a 2-0 lead with a two-run double that plated Lexi Jones, who reached on a fielder’s choice and Paige Brown, who got aboard when the Lady Wildcats committed an error.

Powell scored both of its first-inning runs with two outs.

“Tori had a big hit and that allowed us to jump on them early,” Inman said. “Oak Ridge played hard and they were a lot better than the team that we saw a couple of weeks ago.

“We left a lot of runners on base,” Inman said.

Powell picked up its third and final run of the game in the bottom of the fourth. Hannah Wheeler and Gracie Holt opened the frame with back-to back singles before McKenzie Nicely reached on an error and Wheeler scored on the play.

Oak Ridge pitcher Kaci Jones then got a pair of popups before walking Brown to load the bases. Jones then caught Hutchison looking to end the inning.

Inman was pleased with his junior starter’s effort.

Powell ‘survives’ tournament tussle with Oak Ridge added by design on May 5, 2013
View all posts by design →