By design on June 3, 2012Comments Off on President Obama honors Summitt 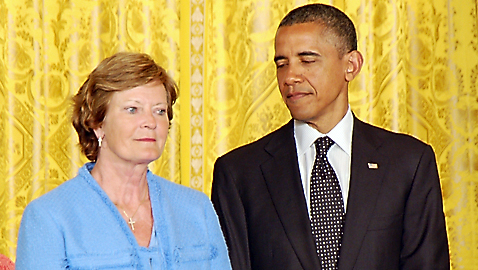 Last Tuesday, President Barack Obama honored Patricia “Pat” Summitt, former head coach and current head coach emeritus of the University of Tennessee’s women’s basketball team, with the Presidential Medal of Freedom. The Medal of Freedom is the Nation’s highest civilian honor, presented to individuals who have made especially meritorious contributions to the security or national interests of the United States, to world peace, or to cultural or other significant public or private endeavors.

President Obama said, “Coach Summitt is an inspiration – both as the all-time winningest NCAA coach, and as someone who is willing to speak so openly and courageously about her battle with Alzheimer’s. Pat’s gift has always been her ability to push those around her to new heights, and over the last 38 years, her unique approach has resulted in both unparalleled success on the court and unrivaled loyalty from those who know her and those whose lives she has touched. Pat’s coaching career may be over, but I’m confident that her work is far from finished. I look forward to awarding her this honor.”

In addition to accomplishing an outstanding career as the all-time winningest leader among all NCAA basketball coaches, Coach Summitt has taken Tennessee to more Final Four appearances than any other coach and has the second best record of NCAA Championships in basketball. She has received numerous awards, including being named Naismith Women’s Collegiate Coach of the Century.

As we approach the 40th anniversary of the signing of Title IX, Summitt’s remarkable career reflects her rightful place in history as an unparalleled figure in women’s team sports. Off the court, Pat’s work as a spokesperson in the fight against Alzheimer’s through the Pat Summitt Foundation Fund is truly inspirational. The Pat Summitt Foundation will make grants to nonprofits to provide education and awareness, support to patients and families, and research to prevent, cure and ultimately eradicate early onset dementia, Alzheimer’s type.

President Obama said, “These extraordinary honorees come from different backgrounds and different walks of life, but each of them has made a lasting contribution to the life of our Nation.  They’ve challenged us, they’ve inspired us, and they’ve made the world a better place.”