By design on April 25, 2021Comments Off on Carroll Reece: Tennessee’s ‘Mr. Republican’ Pt7 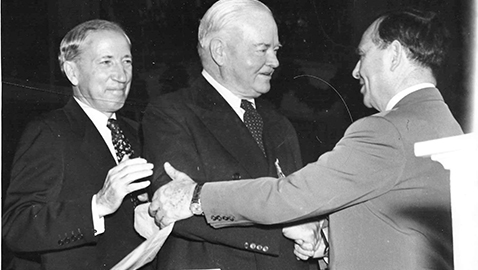 By 1930, Carroll Reece, congressman from Tennessee’s First Congressional District, had served for a decade in the House of Representatives. Reece had defeated an incumbent who had also served for ten years in Congress to win the Republican nomination in 1920 as a thirty-one-year-old veteran of the First World War. Reece had been unopposed inside the Republican primary in 1928 and won a smashing victory in the general election that year.

Brazilla Carroll Reece was one of thirteen children born to John Isaac and Sarah Maples Reece in the old town of Butler, Tennessee. Reece served in the First World War with distinction and emerged as a genuine war hero. Carroll Reece was awarded the Distinguished Service Medal, the Distinguished Service Cross, the Purple Heart and the Croix de Guerre with Palm from the French government.

Reece challenged incumbent Congressman Sam Sells in the 1920 GOP primary and made a statement that he later regretted, telling voters ten years in Congress should be enough for any man. Ten years later, Reece faced a challenge from Oscar Byrd Lovette, who was the district attorney for the district comprised of Sullivan, Hawkins, Greene and Hamblen counties. There are indications Congressman Reece initially did not take Lovette’s challenge seriously, as Lovette had run for Congress previously and drawn few votes throughout the district.

The fact that O. B. Lovette was running in the general election as an Independent in an overwhelmingly Republican district would certainly have caused Carroll Reece to believe he had little chance of losing in November. An additional reason why Congressman Reece may have been overconfident in approaching the general election was Lovette’s late entry into the campaign, which followed the withdrawal of Sam W. Price as a candidate. For an unbiased onlooker, there was little reason to believe an Independent candidate could dislodge a well-entrenched incumbent who had represented the district in Congress for a decade.

One issue would materially affect the race and imperil Congressman Carroll Reece’s tenure in the U. S. House of Representatives: Muscle Shoals and what later became the Tennessee Valley Authority. In 1928, Congressman Carroll Reece had campaigned for renomination in the Republican primary by stating his belief that Tennessee’s future development was dependent upon increased farm production, which required cheaper fertilizer, which could, in turn, be accomplished by fertilizer production through Muscle Shoals, as well as building more highways and improving school systems. By 1930, Reece’s views had come to be better aligned with those of President Herbert Hoover.

Carroll Reece was a formidable candidate and worked hard at his job. Reece and his staff were diligent in their efforts to help residents of Tennessee’s First Congressional District, a standard set for constituent service by Senator McKellar and followed in later years by Jimmy Quillen and the Duncans. Reece was also married to Louise Despard Goff, the only child of Guy Goff, a U.S. senator from West Virginia. Senator Goff was quite wealthy and Carroll Reece had used money available to him to invest in banks and property and other enterprises. Reece was well-funded and had a thorough understanding of politics. So did Oscar B. Lovette.

Lovette had attended Tusculum College and graduated from Vanderbilt University with a law degree. Oscar Byrd Lovette had won his first election at twenty-two when he had been elected to the Tennessee House of Representatives. Lovette had been a member of the Greene County Board of Education, as well as Clerk and Master of the Courts in Greene County for eight years and had been elected to serve as district attorney and served in that capacity for fourteen years before running for Congress in 1930.

Sam Price had been a candidate inside the Republican primary and had won 22,188 votes to 25,594 for Congressman Reece. Price had largely campaigned on the single issue of government operation of Muscle Shoals. Sam W. Price had said, “I am in favor of giving every man a fair chance, but surely ten years is time enough for experimenting.”

Price had won only three counties out of the twelve which comprised the First Congressional District, but he had run the congressman a close race.

On October 19, 1930, the Kingsport Times carried a story stating O. B. Lovette would shortly announce whether or not he would enter the congressional race. According to the Times, Lovette “has been urged by many Republicans from all counties of the district to enter the race and has also been promised support by several Democratic leaders.”

The following day, the Knoxville News-Sentinel carried a story announcing Oscar Byrd Lovette was running for Congress. “I will be a candidate,” Lovette said. “Later, probably tomorrow, I will issue a statement as to my views.” When asked if Lovette’s platform would resemble that of Reece’s primary challenger Sam Price, Lovette replied, “Yes, with emphasis on Muscle Shoals and corrupt primaries. I wouldn’t be a candidate if I didn’t think the primary was corrupt.”

The call for Lovette to run had occurred the previous Saturday when 200 Republicans visited General Lovette at his home to urge him to run for Congress. Monday, just two days after the delegation had visited him, found the candidate feeling good about his chances.

“I am confident of election,” Lovette told a reporter. “In almost a day I have an organization all over the district, using chiefly the organization behind Sam W. Price, whom I supported in the primary election of August 7.”

Oscar B. Lovette stressed his support of the government operation of Muscle Shoals and “the immediate building of the Cove Creek dam.”

“When the Republican vote in the district is 11,000 more than Hoover’s (President Herbert Hoover) vote, there is something wrong,” Lovette insisted.

Congressman Reece had infuriated many of his own constituents by taking the side of the Muscle Shoals development, which favored private enterprise, rather than government operation to produce nitrates for farmers. During the hotly contested primary with Sam Price, President Hoover had dispatched a letter clearly intended to help Reece with Republican voters. Hoover wrote, “I hear your opponents are charging you with failure to serve the interests of your constituents because you refused to accept the Senate plan for dealing with Muscle Shoals.” The president wrote Reece he believed the House plan would “secure development of this great resource more effectively and more greatly in the interests of Tennessee than would the Senate plan.”

Hoover wrote, “I am assured the Senate plan cannot be passed in the House” and went on to intimate he would veto the bill if it did indeed pass both Houses of Congress. “Nor would I approve” the Senate version because “it is not in the interest of Tennessee or the rest of the nation,” Hoover told the congressman. Finally, the president concluded by telling Carroll Reece, “Your course has been the only one that will secure an advancement of this development in the interest of the people of Tennessee.”

Hoover’s letter may have more widely circulated the charge against Reece; the congressman was opposing the Senate plan. Certainly Reece’s primary opponent Sam W. Price made the most of it, accusing the president of interfering in a GOP election.

While his candidacy was literally pulled together at the last minute, O. B. Lovette drew a big crowd when he hurried to Rogersville to speak. According to the Knoxville News-Sentinel, a crowd “filled the court room, an ante-room, and overflowed out into the hall” at the Hawkins County courthouse. Evidently, the audience liked what it heard, as they cheered the former attorney general who claimed the “power trust” had deliberately delayed the construction of the Cove Creek Dam. O. B. Lovette declared his strong support for the Norris Bill (the forerunner of TVA), “liberal aid for soldiers,” as well as relief for farmers and, of course, honest elections.

“The Norris bill is right,” Lovette thundered. “The Senate will not recede from it. The House of Representatives passed it once and by some hook or crook or superinfluence, reversed itself.” O. B. Lovette then dropped the blame squarely in the lap of Congressman Carroll Reece. “Our Representative, they say, was the key man, and the one who held up and blocked this great development. The people are for Government operation, and the building of Cove Creek Dam, or any other disposition of Muscle Shoals.”

Congressman Carroll Reece was assailed by Republicans and Democrats alike. The congressman caught hell from former Secretary of the Navy Josephus Daniels, publisher of the Raleigh Observer in North Carolina. Speaking in Bayboro, North Carolina, the former secretary pointed the finger of blame directly at the White House for the failure to place Muscle Shoals under governmental operation.

“Next to tariff for revenue,” Daniels said, “the biggest issue today is whether the power combination of America shall regulate the government for their enrichment or the government shall be supreme and control for the good of all the people.”

Daniels went on to excoriate Hoover for having backed Carroll Reece for renomination to Congress as well as “blocking of the Norris bill in the House,” which the former secretary said was defeated by Reece in a House committee.

Reece, an able campaigner, had tried to weaken support for the Norris bill by disparaging the Nebraska senator and “his small group of radicals.” Congressman Reece claimed the “entire proposition originated in Red Russia.”

Reece pointed out the Communists in Russia spent millions to promote the notion of the government competing with private enterprise. Reece calmly noted the Communist government of V. I. Lenin owned all power plants and farms in the Soviet Union. Reece was quick to remind voters he had introduced the bill to build the Cove Creek Dam in the first place. The congressman also claimed only his bill would guarantee the production of fertilizer. Reece was also insistent Tennessee be held harmless by the federal government, meaning taxable property lost to the state should be re-compensated in some way. Senator Kenneth McKellar, a fiery advocate for producing nitrates and fertilizer for farm production and a staunch defender of public power, had some of the same concerns. Reece certainly aggravated the powerful senior senator, who had a wide personal following inside the First Congressional District, by accusing McKellar of attempting to socialize the government of the United States “as a means to dispose of Muscle Shoals.”

McKellar viewed President Hoover’s letter to Reece as proof-positive the congressman favored the private power interests over public power. Nor did McKellar and Reece agree with regard to the Cove Creek Dam. Senator McKellar had tried filibustering in an attempt to remove construction of the Cove Creek Dam from the original legislation.

McKellar said neither of Tennessee’s U. S. senators had sought the dam because both realized the federal government could use eminent domain to take the property needed, the size of which amounted to an entire county in Tennessee. When one senator attempted to point out the benefits of the dam would provide, McKellar snapped Tennesseans did not consent to the seizure of their lands. Senator George W. Norris added the only person who wanted to build the Cove Creek Dam was B. Carroll Reece.

Certainly the dam and, more importantly, the question of public versus private power had become a big issue in the contest between Carroll Reece and Oscar B. Lovette.