By design on August 9, 2020Comments Off on My Friend Mackie 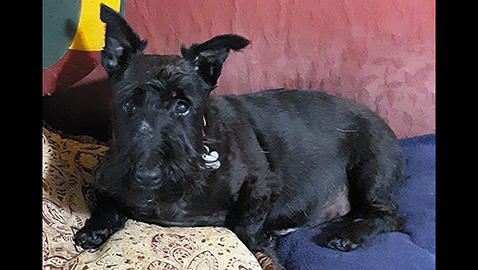 It seems odd to be writing about my dear little friend Mackie in this column, but God help me, he belongs to the past now.

Evidently there really is such a thing as love at first sight.  The very first time I laid eyes on a little Scottish terrier puppy 12 years ago, I was absolutely taken with him.  I drove to Greeneville to view the ten-week old puppy and he was a delight.  For several years, I had three Scotties until Tubby passed away.  Friends urged me to get another one and I found some pretty good excuses not to buy another puppy.  Then-City Councilman Nick Pavlis just ruined my excuses when he said he would pay for the puppy.  If it ruined my excuses, it also begat one of the greatest blessings of my life. I started looking around and found that photograph (which is published with this column) which captured my mind and, more importantly, my heart.

I brought Mackie home with me and for more than twelve years we lived together.  My devoted little friend passed away Monday, August 3.

When someone you’ve loved with all your heart leaves this world, it seems strange to be left behind.  It really doesn’t seem right for the sun to shine, a breeze to blow, or the world to keep turning without that loved one.  It seems impossible to enjoy much of anything, knowing we won’t see that particular loved one in this world again.  Even the simplest things become hard; food ceases to have a taste, conversation evaporates, and one’s heart literally aches with grief.  Restlessness possesses us and happiness seems banished to some dark and distant place, perhaps never to return.

The truth is, Mackie has been so much a part of my life, it is hard to imagine the world without him.  Of course the world will be mighty different without him and try as I might, it won’t be as sweet without Mackie.  Some things just leave an ache in your soul and a hole in your heart.

I’ve had many dogs throughout my life, but Mackie was the best dog ever.  His was a sweet and gentle spirit, with a truly loving nature.  Mackie was also remarkably intelligent.  I could tell him, “Let’s go watch TV” and he would be off for the den and would be sitting on the sofa waiting for me.  Mackie had a bigger vocabulary than most people.  Mackie’s intelligence and understanding throughout his life frequently astonished me.

I only heard Mackie growl once in his life and he never offered to bite anything or anybody.  Mackie loved everybody and was equally convinced everybody loved him as well.

Like any good companion, he was sensitive to my moods and he was quite content to lay on the sofa with me during the evenings or doze beneath my desk as I wrote columns.  Mackie slept beside my bed on his very own little Serta mattress and there was many a morning when I awoke to see him standing beside me, his bright little eyes twinkling at me, patiently waiting for me to get out of bed.  Perhaps the best description of Mackie is he was a teddy bear come to life.

We were separated only once during our time together; that was the 3-4 weeks when I had my heart surgery and went from the hospital to the rehabilitation center.  Mackie was much on my mind while at the hospital and he was in the care of the older of my two sisters.  I asked about him often and imagined and reimagined our joyous reunion in my head.  When the time came and I was leaving the rehabilitation center to go home, my sister brought Mackie with her to pick me up.  The reimagining was nothing like the real thing.  Mackie was sitting in my nephew’s lap and he peered around the front seat, looking at me reproachfully.  Eventually I coaxed him to come and sit with me in the back seat.  I was so happy to see him I cried.  Mackie was still put out with me.

For several months, I couldn’t lift anything heavier than 10 pounds.  Mackie weighed more than twice that and after he had forgiven me for having deserted him, he seemed puzzled as to why I wouldn’t pick up him when he stood up beside my chair.  Instead, I cuddled with him on the sofa until the day came when the doctor lifted the weight restriction.  The first thing I did when I came home was pick Mackie up and sit him in my lap.  He placed his head against my cheek and let out a deep sigh of contentment.

It was following my heart surgery we began our regular walks.  Mackie loved nothing better than going for a walk; it didn’t matter where we walked or how far we went, he simply enjoyed every moment of it.  After my heart surgery, we went on numerous walks daily – – – in parks, up and down the street, or anywhere we took a notion to go.  It was during one of our walks that I noticed Mackie was passing blood with his urine.

That necessitated a trip to the vet’s office and Mackie had a really good veterinarian.  Mackie had surgery, but the vet suspected bladder cancer.  The surgery left him leaking, but I did all I could to make life normal for us both and him comfortable and happy.  I was determined to let him live out his days without undue suffering.  I also got Mackie a friend; a Jack Russell terrier named Billy.

Billy was less than a year old when I brought him home and he was frankly scared and trembling on the way home.  I suppose that is only to be expected when some stranger snatches you up and totes you off to Lord only knows where.  Billy was none too sure about me, but the moment he came into the house and saw Mackie, he was thrilled.  Mackie was equally delighted and was immediately captivated by his new little friend.  I am convinced Billy helped to prolong Mackie’s life and happiness and for that I will always be profoundly grateful.

Mackie and Billy played for several hours each day.  They were so loud I couldn’t have a telephone conversation for the barking and running.  The both of them crowded on the sofa, but I knew Mackie loved Billy when Billy went to time out and Mackie laid beside Billy’s crate until he was released.

When somebody you love is sick, fear grabs hold of your heart and squeezes it with an icy grip that can literally snatch one’s breath away.  One grasps onto any sign of hope even in the least sign of good health or activity nor is it uncommon to experience anticipatory grief when the loved one’s health seems to drag a bit.  Like so many aspects of the human existence, it is something of a rollercoaster ride.

During his lifetime there were folks who made Mackie’s life – – – and mine – – – all the better.  For his entire life, Mackie was groomed at “It’s A Ruff Life”, where Karen and her staff were profoundly considerate and kind to him.  Until his final illness, Mackie was remarkably healthy.  Mackie was tended by Dr. Harry McLeod at the Dogwood Animal Clinic on Chapman Highway, and then by Dr. J. R. Killey.  Both vets were thoughtful and unfailingly kind to both Mackie and me.

Mackie was himself to the very end and I reminded myself that in human terms, he was somewhere between 77 – 84 years old.  Yet it was not long enough.  The time passes all too quickly.

As a Scottish terrier, Mackie possessed a dignity that must be rooted in the very DNA of the breed.  Mackie kept that dignity until his last breath and for that I am surpassingly grateful.  When I reflect back upon his life, I think he sensed the end was coming.  I noticed on those beautiful days Mackie would find excuses to linger in the sunshine, his fur rippling in the breeze, gazing at his surroundings.  I would watch him looking around, surveying the entirety of his own little domain, the world he had lived in his entire life.  Mackie never lost interest in being with me.  As time and illness pursued him, Mackie’s insistence in being in the same room with me seemed to intensify.  Billy had a habit of sprawling on top of me, but Mackie would move the younger fellow out of the way and lie across my thigh so I could scratch his ears.

Mackie, like me, always loved his food.  His favorite treats were adding hard boiled eggs to his supper and bites of apple before bedtime.  As he began to fade and his appetite diminished, I would fret and worry.  When he no longer ate his kibble, I prepared fresh meat – – – steak, chicken, or pork – – – which he ate until the last few days of his life.   A good day was one where Mackie ate his food; every bite was a victory to stave off what I so deeply feared.  When Mackie no longer drank his water, I knew the time had come.  Still, no matter how well I cared for him, it was nothing compared to all he had given me.

My grandfather and father dearly loved dogs.  My grandfather once told me, “All a fellow really needs in this life is a dog and a good book.”  That same love of reading and dogs has followed me throughout my life.  I believe we can love all the many dogs in our life at the various times of our lives; the dogs of our childhood, as well as those shared with family and friends.  Yet, I think there are those singularly special dogs, one who we have bonded with so deeply and that particular dog is the dog of a lifetime.  For me, that dog of a lifetime was Mackie.

That last day, I took Mackie outside one final time.  We sat on the sofa together and I talked to him and scratched his ears before we took the ride to the vet’s office.  At the end, I was able to hold him in my arms and tell him how much I loved him and that I would see him again as he drifted away from me and out of this world.  Mackie never seemed afraid and for that I’ll always be grateful, along with the tenderness shown by Dr. Killey and the nurses.

When I came home alone, Billy seemed confused.  He darted through the house looking for his friend before settling in beside me.  Even before Mackie was gone, the tears would come all too easily.  When he was gone, the tears became a flood of grief.  The sorrow at his loss was as vast as an ocean without shores.

It sure is hard to go on without someone you loved with your whole heart, but as I write this, I think of Mackie’s last day.  It began with a gentle sprinkling, the skies gray and overcast.  After Mackie was gone, I stood outside with Billy and the sun came out and there was a delicate breeze whispering through the leaves.  I looked up at the blue sky and thought to myself, there is a little Scottie angel sitting at the foot of God’s throne.  It lifted my spirits, which is something Mackie managed to do every day of his life.  There is no greater gift than that.

My Friend Mackie added by design on August 9, 2020
View all posts by design →