SDHS Dance Team shines on and off the stage

By design on December 23, 2012Comments Off on SDHS Dance Team shines on and off the stage 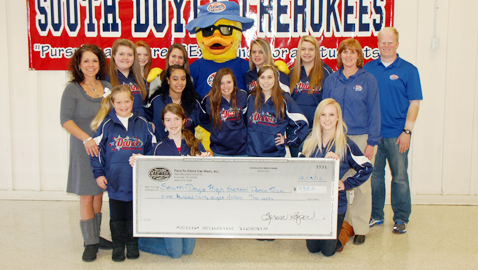 “I have designed this team to be more about character than competing,” South Doyle High School Dance team coach, Lacey Dixon, told The Focus.

Dixon, a special education assistant at South Doyle High School, graduated from the school in 1993 and recently marked her fifth years as the team’s coach. She and the team’s choreographer volunteer their time and expect the group of 12 high school girls to give back as well.

The team is in the process of raising money for new uniforms and competition fees. According to Dixon, the team fundraises for many reasons, but primarily, to make the being on the team affordable so that any girl who wishes can participate.

“We work concessions, run car-washes and yard sales, sell Chick-fil-a calendars, beg, plead and borrow. The team will work any fundraiser we can find,” Dixon said.

In addition to raising funds, volunteer work is part of being on the team. This year the team has fed the homeless at Knox Area Rescue Ministries, and volunteered at Boo at the Zoo and the Fantasy of Trees. They have also donated their old uniforms, spare shoes, and accessories to Project Dance, whose motto is “dancing with integrity to inspire.”

The hard work and dedication has paid off. The SDHS dance team won first place this year in the pom competition at the Tennessee Valley Fair, and will be competing January 26, 2013, in the Soffe Open at the Knox coliseum.

They also perform pregame at SDHS home football games and half time of home basketball games.  The girls practice 3 days a week to learn a new dance for each game, and the team’s motto is “shut up and dance.” While the team consists of girls from all levels of dancing, Dixon relates that what matters most is the girl’s level of commitment, and adds that when the team works hard they dance like professionals.

SDHS Dance Team shines on and off the stage added by design on December 23, 2012
View all posts by design →