By design on November 22, 2020Comments Off on Sergeant York: The Movie of the Famed Tennessean’s Life 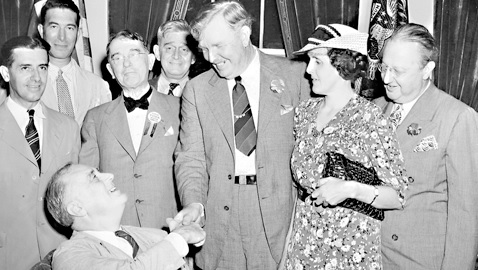 Sergeant Alvin York was already quite famous when Warner Brother’s studio released a movie based on his life in 1941.  The film would go on to become the highest grossing movie of the year, making York even more famous.  Sergeant York topped Clark Gable and Lana Turner in Honky Tonk and Bob Hope and Vera Zorina in Louisiana Purchase, as well as Tyrone Power and Betty Grable in A Yank in the RAF.  1941 also saw the first of the “Road” pictures with Bing Crosby and Bob Hope, as well as the emergence of a comedy team that would become a popular craze during much of the 1940s: Bud Abbott and Lou Costello.  In fact, Abbott & Costello had four of the top twenty grossing films for 1941.

The power of the Hollywood movie machine is difficult for many readers to understand in today’s world; there was no television and radio was still a powerful medium.  Millions of Americans regularly went to the movies weekly; Tennessee’s senior United States senator, Kenneth D. McKellar, loved movies and it was not unusual for him to attend a movie every night of the week.

As is usually the case when Hollywood churns out a “true story,” Warner Brothers took some liberties with Alvin York’s story.  As portrayed by Gary Cooper, York was a somewhat rebellious youth, ever ready to fight and drink, much to the dismay of his highly religious and long-suffering mother (Ms. Wycherley).  Like so many others in Hollywood movies, Alvin York is helped to transform by the love of a good woman, Gracie Williams (Joan Leslie).  Yet it was being struck by lightning that caused Alvin York to have a religious epiphany and an experience that causes him to change his sinful ways.

The movie faithfully tells the tale of York’s initial horror of war and killing, yet he becomes the most famous soldier of World War I, with perhaps the exception of General John J. Pershing, the commander of the American Expeditionary Force in Europe.  Still, today few remember General Pershing and much of York’s fame has endured, largely because of the success of the movie Sergeant York.

The film records York’s heroics and his return to the United States and a ticker-tape parade in New York City, where York is met by Congressman Cordell Hull of Tennessee.  Hull was then Secretary of State in the administration of President Franklin D. Roosevelt.  York tells Hull he doesn’t care to capitalize on the numerous financial opportunities, but wants to go home to Tennessee.  Sergeant York ends with the prized farm York had always wanted to purchase being bought for him and given to him as a gift.

The movie did, more or less, accurately portray the importance of Alvin York’s mother on his life and character.  York’s own diary notes, “My mother was a hardworking woman, a good mother and very religious.  She always tried to instruct us to do the right thing.”  York also noted there were eight boys and three girls in the family and “we were all tolerable sized.”  Alvin was “the largest of the bunch.”

Sergeant York would never have been filmed had it not been for the persistence of producer Jesse Lasky.  Lanky had for years tried to convince Alvin York to sell the rights to his story, which the stubborn Tennessean refused to do.  As war clouds gathered, Lasky took another approach and told York his story was more pertinent and important than ever before.  York was finally worn down and agreed to sell the rights to his story, but made his acceptance conditional.  In fact, Alvin York set three conditions for selling the rights to his life story.  The first was his share of any profits would be dedicated to building a Bible school.  The second was no actress who smoked cigarettes could be selected to play his wife.  Lastly, York was insistent the only actor who could portray him was Gary Cooper.  One of the most popular actors in Hollywood, the taciturn Cooper turned down the part.  It took a personal appeal from Alvin York himself to finally persuade Cooper to take the role.  Even after getting Gary Cooper to agree to play Alvin York, producers Jesse Lasky and Hal Wallis had to go to extraordinary lengths to acquire the star’s services.  Cooper was under contract to producer Samuel Goldwyn, who was a shrewd businessman.  Warner Brothers had to pay a substantial sum for Cooper’s services, as well as loan actress Bette Davis to Goldwyn.  Cooper insisted that Howard Hawks be hired to direct the picture and it turned out to be a brilliant choice.

Cooper poured himself into the role and as he was too old to fight in World War II, as well as suffering from a serious injury to his hip, considered playing Alvin York as his own contribution to the war effort.

Gary Cooper commented on his portrayal of Alvin York, saying, “Sergeant York and I had quite a few things in common, even before I played him on screen.  We were both raised in the mountains – – – Tennessee for him, Montana for me – – – and learned to ride and shoot as a natural part of growing up. “

“Sergeant York won me an Academy Award, but that’s not why it’s my favorite film.  I liked the role because of the background of the picture, and because I was portraying a good, sound American character.”

With the release of Sergeant York, even Warner Brothers had to be surprised by the reaction to the film.  Audiences packed the theaters and critics hailed Cooper’s performance and the movie.

Variety, the Bible of the movie industry, described Sergeant York as “film biography at its best.”  Variety also noted the theme of the film, saying, “In Sergeant York the screen has spoken for national defense.  Not in propaganda, but in theater.”

Gary Cooper enhanced his already formidable image when he accepted the Academy Award for his performance.  Standing beside presenter Jimmy Stewart, Cooper said, “It was Sergeant Alvin York who won this award.”

Following a short and graceful speech, Cooper walked off stage with Stewart and left behind the Oscar he had just won.

The success of Sergeant York had a profound impact on the life of its 53- year-old subject, Alvin York.  York went on a tour of much of the country in the company of producer Jesse Lasky, visiting New York, Philadelphia and other cities.  The tour culminated with a visit to the White House and President Roosevelt.

Just about every Tennessean of importance on Capitol Hill gathered to join Alvin York and his wife as they went to the White House that August.

Senator McKellar later went on to the floor of the United States Senate on October 20, proudly waving a letter he had received from Mrs. Alvin York, informing him that the first grandson in the family had been named “Kenneth McKellar York”.  All five of the York sons had been named for famous Americans; Alvin, Jr., Andrew Jackson, James Madison, Thomas Jefferson, and Woodrow Wilson.

One fellow senator teased the pleased McKellar, saying, “The only reason you got in that hall of fame is because they ran out of the names of heroes.”

Sergeant York and his wife hosted an astonishing 22,000 people for Thanksgiving dinner in 1941 at their Bible school.

Folks had to eat in shifts of 2,500 and each group received a personal greeting and a few words from York.

The Yorks had provided buses to ferry indigent children and their families to come to the festive dinner.  It had become a tradition for the York family during the holidays.

That same month, President Roosevelt invoked the name of Alvin York in his remarks on the observance of Armistice Day.

President Roosevelt also reminded his audience that Sergeant Alvin York had stood at the tomb of the Unknown Soldier and observed there are people who ask World War I veterans, “What did it get you?”

FDR said every American knew the answer to that particular question.

“We know that these men died to save their country from a terrible danger of that day.  We know because we face that danger once again on this day.”

Alvin York’s diary records a scene where he came in “after midnight” to find his mother wide-awake and waiting for him, which was a theme of the film of his life.

Alvin readily confessed he was drunk and had been fighting and he wondered why his mother was not asleep.

Mrs. York retorted she couldn’t sleep when she didn’t know what would become of her son and demanded to know, “Alvin, when are you going to be a man like your father and grandfathers?”

Alvin York immediately told his mother he would never again drink, smoke or chew tobacco, nor would he ever cuss, fight or gamble.

Alvin York kept his promise to the end of his days.

Sergeant York: The Movie of the Famed Tennessean’s Life added by design on November 22, 2020
View all posts by design →