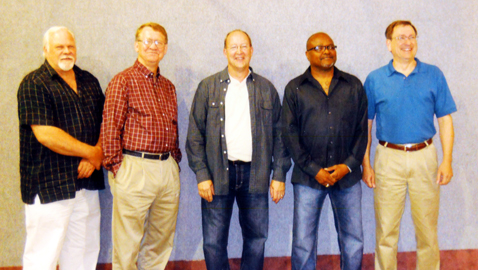 “Ken Sparks will always be an inspiration for me. His high expectations for me were no less than those of my parents, in regards to my work ethic and achievement of personal goals.” These glowing remarks about Coach Sparks were made by John Anderson. As a freshman, John played safety on defense and wingback on offense during his days at Gibbs High. His brothers, William and Sam, were also on Sparks’ first team.

With the late Johnny Bean at quarterback, the 1968-69 Gibbs High football team combined effort and talent to give young Coach Sparks his very first win. Some of those players on Sparks’ first team gathered for a photo earlier this year at the Gibbs Class of ‘72 reunion. Though he could not attend, the class-act coach called in his regrets. His absence did not stop former players from remembering the coach whose career they helped launch. “I feel that being part of the football team helped me in developing skills related to working with others for a common goal. It, along with encouragement from my parents, taught me the values gained by commitment to a cause and not quitting when times are hard,” Anderson added. After all these years, the impact of Coach Sparks has never been forgotten. John recalls more about the Coach: “His personal commitment to Christ has always been an excellent example for all of his players to follow. I still consider him more than a friend. Ken Sparks is family, and I am grateful for the contribution that he has made in my life.”

Memories abound for this coach who walked into a school that had no football program at all and started one. “During my freshman year, I was the back-up kicker for the senior kicker,” said Ernie DeZearn. “They called me ‘the Toe.’ Looking back, I realize the older we got, the better we were! It was an honor to be on the first team the first year Coach Sparks began his successful coaching career.”

Mike Fielden was a freshman tailback who played on the team. After reading about “Ken Sparks, More Than a Coach” (Focus 4- 9-12), Mike said, “it brought back some good memories of playing for him as a freshman.” Mike’s older brother, Tom, was a senior and co-captain of the team. I am amazed at the influence this young, inexperienced coach had on his players. Mike shares more of his memories about the coach who has inspired thousands of student athletes on and off the field: “I remember Coach Sparks as intense, a great mentor, and not afraid to show you physically and mentally how you needed to do your job. In practice one day, he got in the “hole” to demonstrate how to fight off a blocker to make a tackle on the ball carrier. We had on pads, he did not. He did that because one of his linemen was slacking on a Monday practice after a game the Friday night before. What he was really teaching us was life. You win or lose by what you do every day in each practice, in each game, or on each play. If you want to win in life, you have to work at it and earn it. Coach Sparks walked the talk. You knew you could trust him and worked to give him everything you had.”

I had forgotten that Dan Luttrell was even on the football team. But, in his senior year, Dan traded in his French horn in the marching band for a football. When asked about Coach Sparks, Dan said, “it took a special coach to take on his task.”  Indeed, it did!

Doyle Satterfield was, also, one of the forty-plus players on Coach Sparks’ first team. Although students from Ritta, Corryton, and Gibbs Elementary Schools made up the student body at Gibbs High, it was still the smallest school in the county. As one player reminded me, it had to take a lot of courage to suit-up and play against guys who had been playing for years at other schools.

Since his first coaching job at Gibbs, Ken Sparks has become a Hall of Fame Coach. The Carson-Newman Eagles recently rewarded him with an awesome accomplishment–win number 300! It is no secret that this legendary coach is known as much for his faith as football. In the face of his recent adversity dealing with cancer, Coach Sparks will surely be coaching as much about the game of life as the game of football in the days ahead; and, he will continue making a difference in the lives of young athletes.

As the jerseys go on and footballs are snapped, thrown, and kicked, there is much more at stake in Sparks’ games than adding to the “win” column. There are lessons in courage and character, friendships and faith, and respect and responsibility. The sports complex at the college now bears the coach’s name; former players still praise him; and, it all started one Friday night on a high school football field in the fall.