By design on June 24, 2012Comments Off on The 2nd Annual Knoxville Sports Media Combine 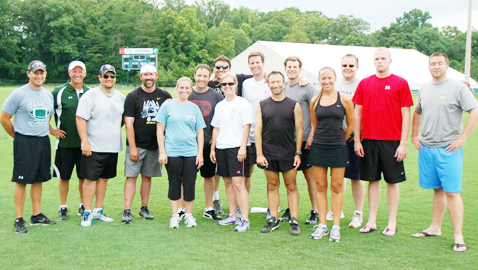 Next month the Summer Olympic games will get underway in London.  The world’s greatest athletes will compete for pride, for country, for fame…

On the flip side of that coin… last week some current and former members of the Knoxville area sports media competed as well, and their goals were much less lofty… most were simply hoping not to break a collarbone in the process.

The 2nd Annual Knoxville Sports Media Combine was held at Webb School on June 16th.  Patrick Brown from the Chattanooga Times Free Press  won the men’s competition (Under 35), Daryl Hobby from WVLT-TV was victorious in the older men’s competition (35 and over), and Kris Budden from WBIR-TV won the women’s division.

But the real winner is The Boys & Girls Clubs of the Tennessee Valley.  All proceeds from this competition were given to this very worthy cause.

Lisa Hurst, President/CEO of Boys & Girls Clubs of the Tennessee Valley said, “We appreciate the support of the planners and participants of the Knoxville Sports Media Combine.  It is important for us to partner with community members who are good role models for our kids.  We, too, encourage fun, active lifestyles and teach good citizenship and sportsmanship!”

The events ranged from combine  staples like the 40 yard dash and the 20 yard shuttle, to a surprise field goal kicking contest, and the always entertaining “run 50 yards, put on shoulder pads and a helmet, then run back while jumping over hurdles” contest.

The Knoxville Sports Media Combine got a real boost when the competition was opened to the significant others of competitors (in 2011, Budden was the only female contestant) as well as a rather liberal interpretation of the term “sports media.”  From this category came perhaps the biggest surprise of the morning… Harlow Sumerford’s stunning second place finish in the under 35 category.  He barely missed out on unseating Patrick Brown from the championship perch.

Sumerford is a former news reporter at WATE-TV, and had done stories in the past that had something to do with sports… so he was eligible.  Sumerford now works for U.S. Representative John J. Duncan, Jr., and showed off some previously hidden speed.

Former WBIR-TV news reporter Anthony Welsch (who has worked on their High School football broadcasts) drilled a field goal that might have been good from 40 yards. The last minute decision to kick some field goals certainly agreed with him.

Former WBIR-TV sports producer and GoVolsXtra.com contributor Craig Bates, known more for his hockey prowess, showed his toughness by popping his left shoulder back into place by slamming it into the Webb goalpost.  But as WATE-TV photojournalist Steve Coy (a KSMC competitor and softball league colleague of Bates) said, “He’ll be fine… this happens all the time.”

If there is a budding controversy, it is the utter disregard by some competitors for touching the correct line on shuttle runs.  Next year the KSMC plans on utilizing the tennis technology which lets you know if a certain shot clipped the line, or if it was out by a centimeter. (Editor’s note: That would cost a LOT of money. There is a better chance that Lane Kiffin will be coaching the Vols in 2013 than that technology being acquired).

The event went off without a hitch thanks to Webb School football coach Dave Meske, and support from assistant coach Robby Collier, and a few Spartans football players.

Next year the event will be held on May 4th at Webb School. Hope to see you there for all the fun.